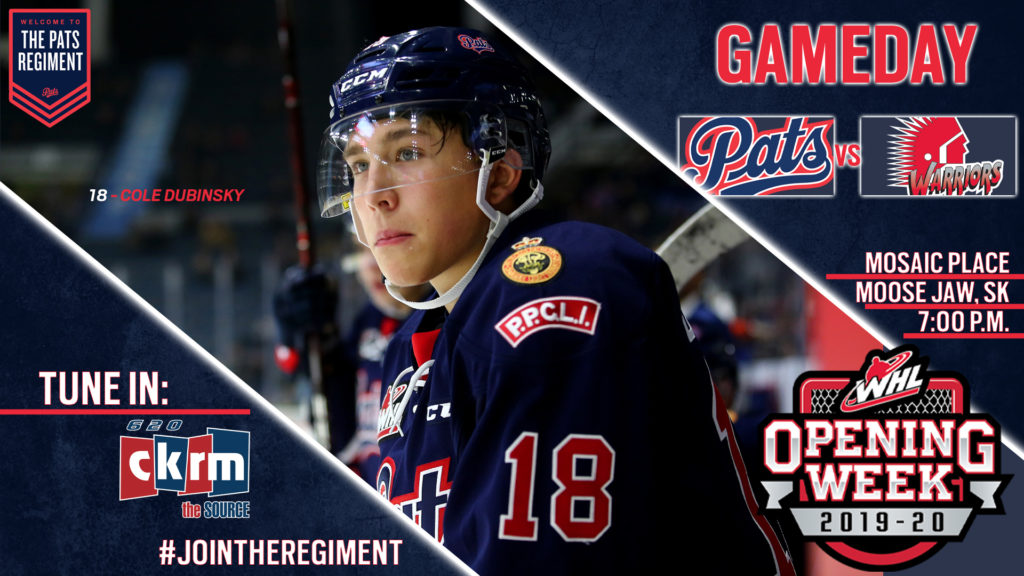 The Regina Pats (1-0-0-0) hit the road on Saturday for the back half of a home and home set to kick off the season against the Moose Jaw Warriors (0-1-0-0). Puck drop is at 7:00 p.m. at Mosaic Place. The Pats started the season on Friday night with a 3-2 win over the Warriors in the home opener at the Brandt Centre. Saturday will mark the second of eight meetings between the Pats and Warriors in 2019-20, Regina is 1-0-0-0 in the season series. Tonight’s game can be heard with Bennett Dunlop Ford Pats Hockey starting at 6:35 p.m. on 620 CKRM.

Quick Facts
-The Pats opened the regular season with a win on Friday for the first time since 2011-12.
-Friday’s win snapped a five-game losing streak for the Pats against Moose Jaw going back to last year.
-Dawson Holt had two assists in his Pats debut on Friday night.
-Ty Kolle tied a career high in points in a game on Friday with three, he had done it four previous times in his WHL career.
-Tyson Feist picked up his ninth career assist in the victory Friday night over the Warriors.

A Long Time Coming
The Regina Pats snapped a seven-game losing streak on opening night on Friday with their 3-2 win over the Warriors. The last time the Pats opened up a season with a victory was in 2011-12 when they beat the Swift Current Broncos 5-1. Lane Scheidl scored the game winner that night and Matt Hewitt made 24 saves. Regina had gone 0-6-1-0 in the seven season opening games since then. The last time the Pats started a season 2-0-0-0 was also in 2011-12, they would get to three and oh that year before losing their fourth game to the Kootenay ICE.

Kolle’s Big Night
Pats 19-year-old forward Ty Kolle got his season off to a fast start with three points on Friday night against Moose Jaw, scoring twice and adding an assist. It was the fifth time in his career that Kolle had a three-point game and the second time he had done it in his first game of the season. In his WHL debut back on September 25, 2016, Kolle had three assists for the Portland Winterhawks in a 7-3 win over the visiting Tri-City Americans. Three of Kolle’s five three-point games have come in a Pats uniform, scoring a hattrick against Calgary and two goals and an assist against Brandon last year.

Last Pats Game
Ty Kolle had two goals and an assist to lead the Regina Pats to a 3-2, opening night win over the Moose Jaw Warriors on Friday night at the Brandt Centre. The Pats got off to a fast start with a goal 20 seconds into the contest. Austin Pratt tipped in his first of the season, assisted by Dawson Holt and Ty Kolle and the Pats were off and running. Regina added to their lead 10 minutes later when Ty Kolle chipped in his first from the right goal line, Holt and Tyson Feist drew assists and the Pats took a 2-0 lead into the break. The Warriors cut the lead in half on the powerplay in the second, Keenan Taphorn jammed in his first and it was a one goal game going to the third. In the final frame, the Warriors tied it up with a powerplay goal from Carson Denomie at the 6:36 mark to make it 2-2. Four minutes later however, Ty Kolle stole a puck in the offensive zone and roofed it for his second of the night to give the Pats the lead back at 3-2. They would hold on from there and picked up a big two points on opening night. The Pats outshot the Warriors 30-22 in the win, the powerplay went oh for one and the penalty kill was five for seven. Ty Kolle led the offence with two goals and an assist, Dawson Holt had a two-point night, while Max Paddock made 20 saves in goal.

Last Pats Game Vs Moose Jaw
September 20, 2019 – Ty Kolle scored twice and added an assist while Dawson Holt had two helpers in a 3-2 Regina win on home ice over the Warriors. Austin Pratt scored the other Pats goal, while Moose Jaw got goals from Keenan Taphorn and Carson Denomie. Max Paddock made 20 saves for Regina Bailey Brkin stopped 27 for the Warriors.