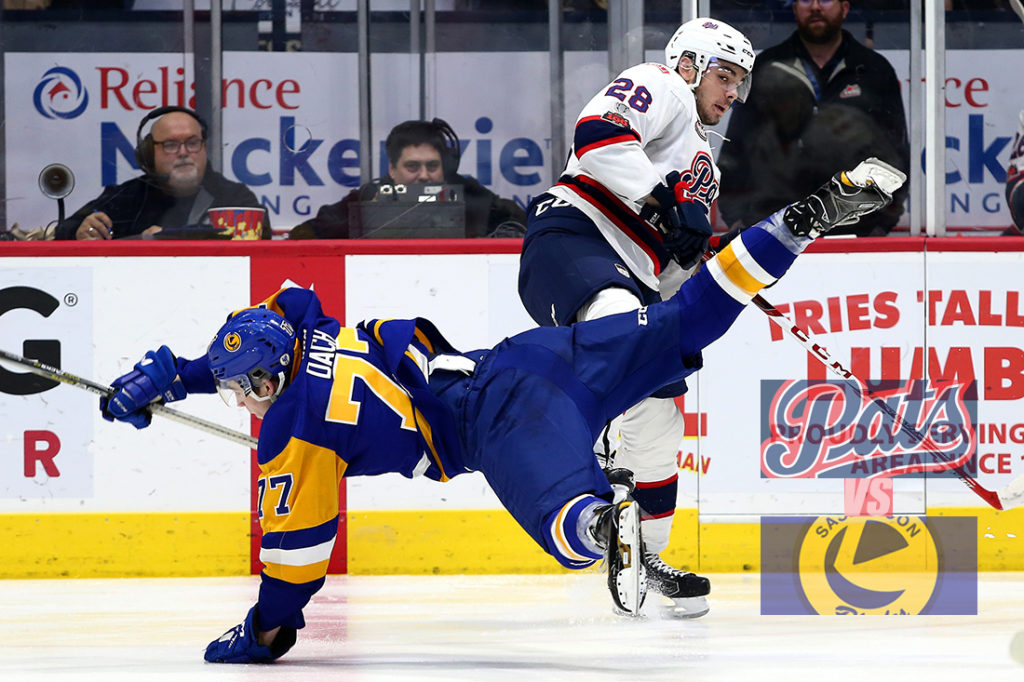 The Regina Pats (4-12-0-0) are back in action on home ice Saturday night against the Saskatoon Blades (10-6-2-0). Puck drop is at 7 p.m. at the Brandt Centre. The Pats last game was on Friday night at home to Edmonton and the Oil Kings came away with a 5-1 victory. The Blades were in Moose Jaw on Friday and skated past the Warriors 5-2. Tonight is the first of six meetings between the Pats and Blades in 2018-19. Tonight’s game can be heard with Bennett Dunlop Ford Pats Hockey starting at 6:35 p.m. on 620 CKRM and will also be broadcast on Access 7.

The Lead Up: Pats fall 5-1 at home to Edmonton Friday
The Regina Pats fell to 4-12-0-0 on the season on Friday night after a 5-1 loss to the Edmonton Oil Kings at the Brandt Centre. After a scoreless first period, the Pats outshot Edmonton 13-6 in the second frame, but gave up the game’s first two goals and trailed 2-0 after two periods. The Oil Kings broke the game open with three goals in the first 7:27 of the third period to lead 5-0. Trey Fix-Wolansky led the visitors with four assists, while Brett Kemp scored two and added a helper. The Pats avoided the shutout when Jake Leschyshyn put home a rebound for his seventh of the year at 12:37 to make it 5-1 and that was the final score. The Pats outshot the Oil Kings 25-22 in the loss, the powerplay was oh for four, the penalty kill four for six and Max Paddock made 17 saves.

Pouteau Returns
Pats overage defenceman Brady Pouteau made his long-awaited season debut on Friday night at home to the Edmonton Oil Kings. The product of Oak Bluff, Manitoba missed the first 15 games of the year recovering from off-season shoulder surgery. Pouteau was named the Pats Rick Rypien Award winner in 2017-18 as the club’s un-sung hero. The 20-year-old was drafted in the fourth-round of the 2013 WHL Bantam Draft by the Pats. He was traded to Lethbridge in 2016, but returned to the Pats a year later for their Memorial Cup run. In 151 career games, Pouteau has scored four goals and has 32 points to go along with 67 penalty minutes.

Henry Extends Streak
Pats forward Nick Henry extended his point streak to six games with an assist on Friday against Edmonton. The fourth-round pick of the Colorado Avalanche has four goals and five assists in the streak. Henry has been kept pointless just once in his last 12 games, putting up six goals and 12 assists in that stretch. For the season, Henry leads the Pats with 21 points, which is tied for 12th in overall scoring in the Western Hockey League.

Four Straight for Leschyshyn
Pats captain Jake Leschyshyn also got his point streak extended to four games thanks to a third period goal on Friday. The 19-year-old has scored twice and has four assists in that stretch. A signed prospect of the Vegas Golden Knights, Leschyshyn is tied for the team lead in goals with seven and second overall in points with 17 in his 15 games played. Overall, Leschyshyn is tied for 28th in league scoring and his seven goals rank in a tie for 37th.