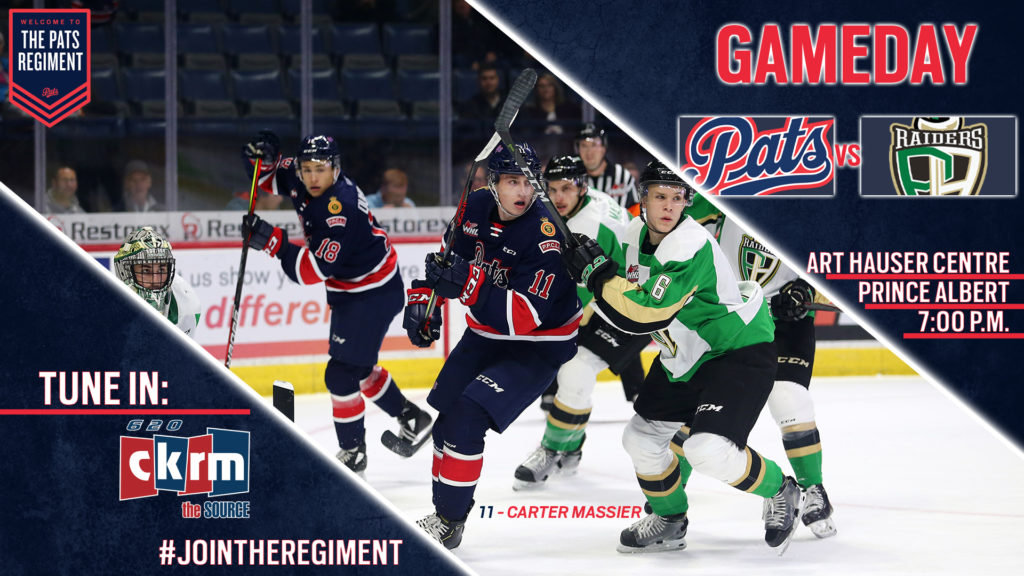 The Regina Pats (1-4-0-0) continue their three in three weekend on Saturday night on the road against the Prince Albert Raiders (3-0-2-0). Puck drop is at 7:00 p.m. at the Art Hauser Centre. The Pats kicked off their weekend with a 6-2 loss at home to the Medicine Hat Tigers on Friday, their fourth straight defeat. The Raiders were at home to the Saskatoon Blades on Friday, dropping a 2-1 decision in overtime. Saturday will mark the second of six meetings between Regina and Prince Albert in the 2019-20 season, the Raiders are 1-0-0-0 in the season series. Tonight’s game can be heard with Bennett Dunlop Ford Pats Hockey starting at 6:35 p.m. on 620 CKRM 2, via 620ckrm.com.

Quick Facts
-Saturday is the second of six meetings between the Pats and Raiders, Prince Albert is 1-0 in the season series. The Pats are 3-7-0-0 in the last 10 meetings between the two clubs.
-The Pats are 0-1-0-0 in their lone other road game so far this year.
-Max Paddock returned to the lineup on Friday, making 40 saves against Medicine Hat.
-Pats captain Austin Pratt was held pointless for the first time this season on Friday against the Tigers.
-Carter Massier picked up his first goal and first assist of the season on home ice on Friday.

Two Points Each
The Pats line of Carter Massier, Garrett Wright and Ty Kolle combined to score both Regina goals on Friday against the Medicine Hat Tigers. Massier scored his first of the year early in the first and then Ty Kolle scored just over eight minutes into the period to tie the game at two. Massier and Kolle each had assists on the first two goals and Garrett Wright had assists on both markers as well. For Wright, he is up to four points in five games to start the year. Last season he had 11 points in 63 games played. Ty Kolle is up to five points on the season, one back of the team lead held by Austin Pratt, his three goals are tied for the team lead with Riley Krane.

Paddock Returns
Pats starting netminder Max Paddock returned to the lineup on Friday after missing the previous two games. The 19-year-old was named the game’s third star, making 40 saves on 46 shots in the defeat. Paddock is 1-2-0-0 on the season, making 81 saves in those three starts. For his career, the product of Brandon, Manitoba is 5-3 against Prince Albert in eight starts.

Last Pats Game
The Regina Pats wrapped up their three-game homestand with a 6-2 loss to the Medicine Hat Tigers on Friday night at the Brandt Centre. The Pats got off to a fast start with a goal just over a minute in. Carter Massier picked up his first of the year from the left circle to make it 1-0. The Tigers responded with two quick powerplay goals, the first from Cole Sillinger and the second from Ryan Chyzowski, and it was 2-1. The Pats drew even a short time later when Ty Kolle finished off a pretty passing play with Carter Massier and Garrett Wright for his third of the season and it was 2-2 after an entertaining opening period. In the second, the Tigers scored three times at even strength and took a three-goal lead into the third. In the final frame, Cole Sillinger scored his second of the night for Medicine Hat to round out the scoring in what was a 6-2 final. The Pats were outshot 46-24, the powerplay went oh for four and the penalty kill was three for five. Carter Massier, Ty Kolle and Garrett Wright led the offence with two points each, while Max Paddock made 40 saves.

Last Pats Game Vs Prince Albert
September 27, 2019 – The Regina Pats got two first period goals from Riley Krane to lead the Raiders 2-0 after the opening period. Prince Albert struck for two in the second to take a 2-2 tie to the third. The final frame saw the Raiders score twice and add an empty netter to win 5-2. Danton Belluk made 24 saves in net for the Pats, Boston Bilous stopped 23 of 25 for Prince Albert. The Raiders got three-point nights from Ozzy Wiesblatt, Aliaksei Protas and Brayden Watts in the victory.