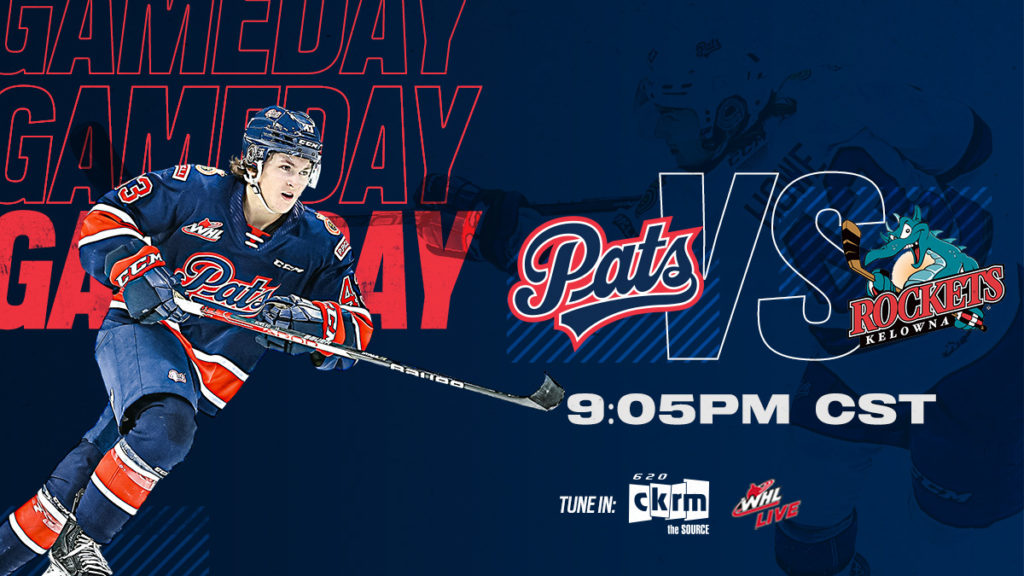 The Pats are 2-0 to begin their six game road trip, coming off a 9-5 win over the Victoria Royals on Saturday. Tanner Howe scored a career-high four goals and six points (4G-2A), while Connor Bedard captured his fourth career hat-trick in a four point outing (3G-1A). Luke Bateman also chipped in with a career-high three assists and Stanislav Svozil tied his career-high with four points (1G-3A). The final shots were 28-28. The Pats were 1-4 on the power play and 1-4 on the penalty kill, allowing four power play goal against for the first time this season.

Meanwhile, the Kelowna Rockets are coming off a 4-3 loss to the Moose Jaw Warriors at home on Saturday. The club has now dropped two of their last three games after they had won two in a row, now sitting with a 3-2 record over their last five contests (24GF-16GA). The Rockets are currently eighth in the Western Conference standings with 19 points, just one point behind the Tri-City Americans for seventh.

Last season, the Rockets finished with a 42-20-1-5 record with 90 points, which was good for eighth in the WHL and fifth in the Western Conference.

53: Number of points (22G-31A) in 24 games for Pats captain Connor Bedard leads the WHL, while his 22 goals are first, and his 31 assists are also first…the North Vancouver, BC product also leads the WHL in power play points (20) and is T-1st in power play assists (15).

28.6: Shooting percentage for Alexander Suzdalev this season is second in the WHL (12-for-42)…the Washington Capitals 2021 third-round pick had his nine game point-streak end on Saturday (6G-11A-17PTS)…his eight power play goals are tied for second in the WHL.

7: Goals for Borya Valis over his last nine contests, as he has scored in five of his last nine games with seven goals and five assists for 12 points during that time…on Nov. 9 vs. Edmonton, the Denver, Colorado product recorded a career-high four points, as well as his first career hat-trick.

4: Four game point-streak (2G-6A) for Stanislav Svozil heading into tonight’s action…the Columbus Blue Jackets 2021 third-round pick is tied for fifth amongst all WHL defencemen in points with 24 (4G-20A) while tied for second in power play assists with 13 and power play points with 15.

33: Total points this season for Tanner Howe is tied for ninth in WHL scoring, while his 15 goals are tied for seventh…he now has points in five of his last six contests (8G-6A-14PTS).

17: Power play goals for the Regina Pats over their last 12 contests, having scored at least one power play marker in 12 straight…during that time, the Pats man-advantage has gone 17-for-54, running at 31.4%…overall, the Pats power play is 10th in the WHL at 23.7%.