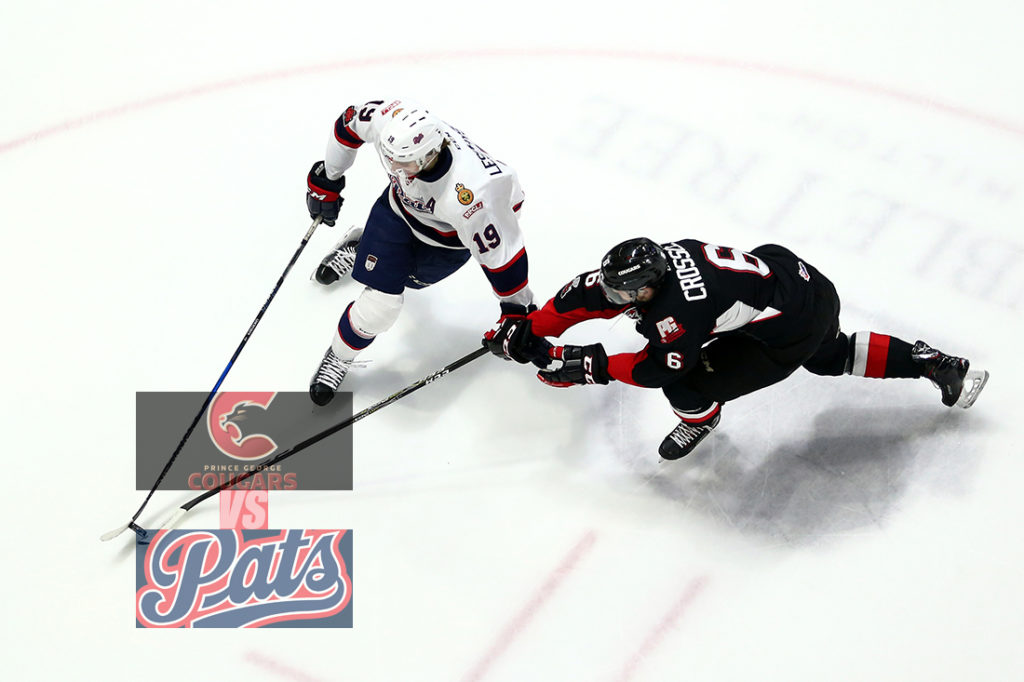 The Regina Pats (8-16-0-0) wrap up their six-game road trip on Friday night against the Prince George Cougars (9-10-1-2). Puck drop is at 9:00 p.m. Regina time at the CN Centre. The Pats are coming off a tight 3-2 loss to the Kelowna Rockets on Wednesday to fall to 1-4-0-0 on the road trip so far. The Cougars were last in action on Sunday when they lost at home to the Kamloops Blazers 7-3. Tonight is the first and only meeting of the 2018-19 season between the Pats and Cougars, Regina is 4-1-0-1 in the last six meetings between the two clubs. Tonight’s game can be heard with Bennett Dunlop Ford Pats Hockey starting at 8:35 p.m. on 620 CKRM.

The Lead Up: Pats drop a tight one in Kelowna Wednesday
The Regina Pats dropped a tight one, 3-2 in Kelowna to the Rockets on Wednesday night. The Rockets picked up the game’s first goal 2:15 into the opening period. Kyle Crosbie banged in his own rebound and it was 1-0 Kelowna after one. In the second, the Rockets got a powerplay goal from Nolan Foote to lead 2-0 eight minutes in. Regina got one back when Jake Leschyshyn streaked up the left wing and poked in his team leading 16th to cut the Kelowna lead in half. The Rockets got the two-goal lead back with another powerplay goal from Nolan Foote late in the second and it was 3-1 after two periods. In the final frame, it stayed 3-1 until the 19-minute mark when Aaron Hyman scored his fifth of the year on the powerplay and the Pats got to within a goal. The Rockets held on from there and picked up the two points in a 3-2 final. The Pats were outshot 31-25, the powerplay was one for four and the penalty kill went three for five. Nick Henry and Jake Leschyshyn led the offence with two points each, while Dean McNabb made 28 saves.

Leschyshyn Streak Hits 12
Pats captain Jake Leschyshyn scored a goal and added an assist on Wednesday in Kelowna to extend his point streak to 12 games. The 19-year-old has scored 11 goals and has 10 assists for 21 points in that stretch. The signed prospect of the Vegas Golden Knights was last kept off the scoresheet on October 21 against the Everett Silvertips at the Brandt Centre. Leschyshyn has points in 19 of his 23 games played this season, scoring a team leading 16 goals and sits second overall on the squad with 32 points. His 32 points are tied for 11th in overall scoring in the Western Hockey League and his 16 goals are tied for seventh. 10 of Leschyshyn’s goals this year have come on the powerplay which is in a three-way tie for first in the league with Brandon’s Stelio Mattheos and Portland’s Jake Gricius.

Hyman Top 5
Pats overage defenceman Aaron Hyman scored his career high, fifth goal of the season on Wednesday night in Kelowna. The product of Calgary, Alberta is up to 23 points in 24 games in the 2018-19 season, which is tied for fourth best among all WHL defencemen. Hyman’s 18 assists are fourth best in the league and his five goals are tied for ninth overall. Hyman has put up 11 assists on the powerplay, that is the third most among WHL defenceman.