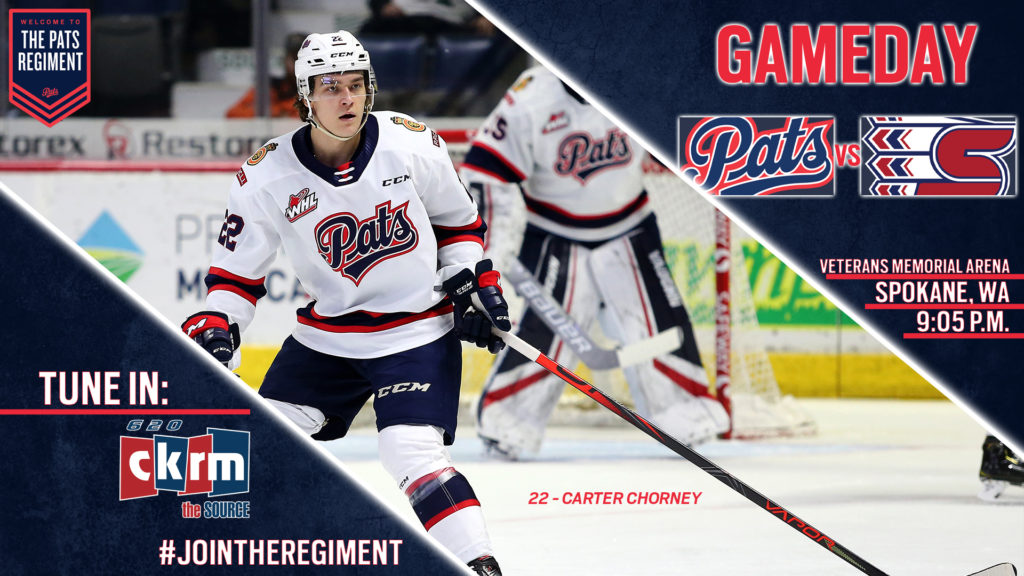 The Regina Pats (13-24-3-2) will play the fifth and final game of their U.S. Division road swing on Saturday night when they visit the Spokane Chiefs (22-15-2-1). Puck drop is at 9:00 p.m. Regina time at Veterans Memorial Arena. The Pats were last in action on Friday night when they dropped a 4-2 decision in Seattle to the Thunderbirds. The Chiefs hosted the Portland Winterhawks on Friday and fell 5-3. Tonight is the first and only meeting of the season between Regina and Spokane, the Pats lost the lone meeting last year at home, 4-0. The game can be heard with Bennett Dunlop Ford Pats Hockey starting at 8:35 p.m. on 620 CKRM.

Quick Facts
– The Pats are 4-4-1-1 in their last 10 meetings with Spokane, the Chiefs have taken the last two contests.
– The Pats are 1-3-0-0 so far on their road trip and 5-6-0-1 since the Christmas Break.
– Kyle Walker leads the Pats with two assists in 10 career games against Spokane.
– Josh Paulhus scored in his WHL debut on Friday night in Seattle.
– Cole Dubinsky has three assists in his last four games.
– The Pats have scored five powerplay goals in the first four games of their U.S. road trip.
– Zack Smith has points in three straight games, scoring two goals and adding an assist.

What a Debut
Dealing with a rash of injuries, the Pats re-called 17-year-old forward Josh Paulhus from the Humboldt Broncos of the SJHL on Thursday and he made his WHL debut on Friday night in Seattle. The Saskatoon product scored his first WHL goal in the second period, tipping in a Jan Cikhart shot, which at the time gave the Pats a 2-1 lead. Paulhus was signed during training camp in August and is playing in his first season of junior in Humboldt. He has four goals and 10 points in his rookie season with the Broncos.

Smith Producing
Pats forward Zack Smith extended his point streak to three games on Friday when he scored his eighth goal of the season in the second period in Seattle. The 18-year-old has two goals and an assist in his point streak and has scored three goals and an assist in his last five games. Smith is one off the rookie team lead in goals for the season, Drew Englot leads the way with nine goals. Smith and Englot are tied for the team lead in rookie points with 12. Zack will be taking on his older brother Ty in tonight’s game in Spokane.

Last Pats Game
The Regina Pats took a 2-1 lead to the third on Friday night in Seattle, but the Thunderbirds scored three times in the final frame to take a 4-2 victory. In the first, the game’s first goal came at 13:14 when Lucas Ciona banged in a loose puck to give Seattle a 1-0 lead and that was the score through 20 minutes. In the second, Zack Smith scored his eighth on a great feed in front from Cole Dubinsky to tie the game at one. Just over a minute later, Josh Paulhus tipped in his first career goal in his first career game to make it 2-1 Regina and that was the score after two periods. In the final frame, Kelti Jeri-Leon scored twice in the first half of the period to give Seattle a 3-2 lead. Simon Kubicek got another with less than six minutes left to make it 4-2 and that was the final score. The Pats were outshot 30-25, the powerplay was oh for three, the penalty kill four for four and Donovan Buskey made 26 saves.

Last Pats Game Vs Spokane
October 17, 2018 – Adam Beckman scored twice, Jack Finley and Riley Woods had two point nights as the Chiefs beat the Pats 4-0 in Regina. Spokane scored once in the first, once in the second and twice in the third en route to victory. Bailey Brkin stopped all 35 shots he faced for the shutout, Max Paddock stopped 39 of 43 for Regina.