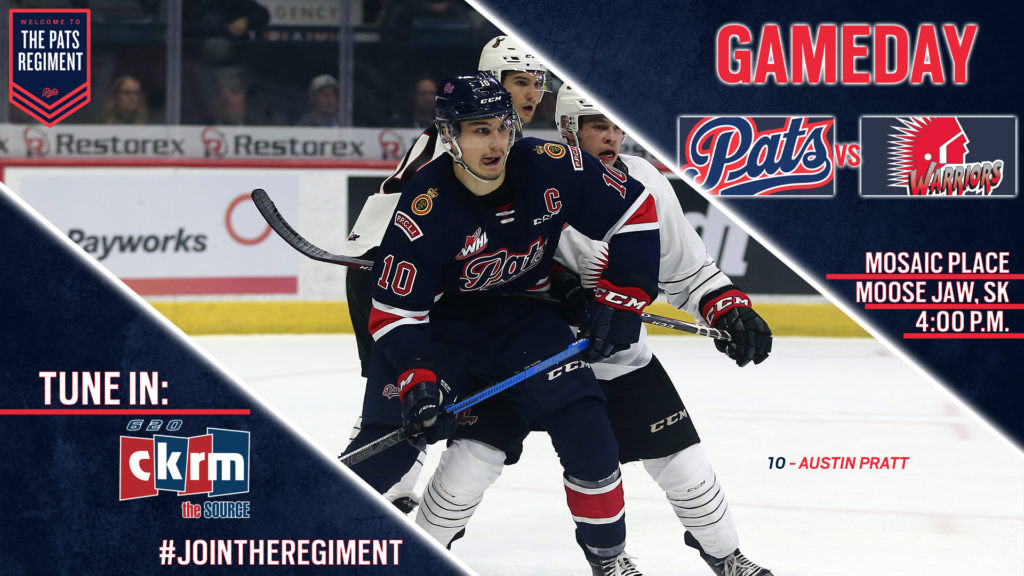 The Regina Pats (1-5-0-0) wrap up their three games in three days weekend on Sunday in Moose Jaw against the Warriors (3-1-0-0). Puck drop is at 4:00 p.m. at Mosaic Place. The Pats dropped a 6-0 decision in Prince Albert on Saturday night, their fifth straight defeat. The Warriors meanwhile have been off since last weekend when they beat the Brandon Wheat Kings 3-2 for a third consecutive victory. Saturday will mark the third of eight meetings between Regina and Moose Jaw in the 2019-20 season, the Pats are 1-1-0-0 in the season series. Today’s game can be heard with Bennett Dunlop Ford Pats Hockey starting at 3:35 p.m. on 620 CKRM.

Quick Facts
-The Pats are 1-1-0-0 against Moose Jaw this season, scoring six goals in the first two meetings and giving up seven. The home team has won both meetings so far this year.
-The Pats are 0-2-0-0 away from home this season.
-Regina is 2-8-0-0 in the last 10 meetings with Moose Jaw.
-Duncan Pierce returned to the Regina lineup on Saturday after missing the previous three games with injury.
-The Pats were shutout Friday for the first time since March 13, 2019 against the Swift Current Broncos.
-Max Paddock made 10 saves on 11 shots in a relief appearance on Saturday in Prince Albert.

Pierce Returns
Pats forward Duncan Pierce returned to the lineup on Saturday after missing the previous three games with an upper-body injury. The 19-year-old recorded a shot on goal in his return against the Raiders. Pierce has one assist in three games this season, he put up a career high eight goals and 20 points a year ago, playing in 50 games. Forward Sloan Stanick also came back on Saturday after missing Friday’s game with a minor ailment. Stanick has one goal so far in the first five games of his WHL career, the marker coming against the Moose Jaw Warriors in game two of the season.

Last Pats Game
The Regina Pats lost a 6-0 game in Prince Albert to the Raiders on Saturday night. In the first, the Raiders opened the scoring at 4:42 on a slap shot from the right point from Zack Hayes. The Pats fell behind 2-0 eight minutes later when Eric Pearce batted in a rebound and that was the score after the opening stanza. The Raiders would add four more in the second period and led 6-0 at the break. Max Paddock replaced Danton Belluk in goal after the 5-0 Raider marker. In the third, neither team would score, and Prince Albert took the two points in a 6-0 final score. The Pats were outshot 30-13, the powerplay was oh for five, the penalty kill two for three, while Danton Belluk and Max Paddock combined to make 24 saves.

Last Pats Game Vs Moose Jaw
September 21, 2019 – The Regina Pats fell behind 4-0 to the Moose Jaw Warriors on the road in their second game of the season. Sloan Stanick, Riley Krane and Robbie Holmes would score in the third to get the Pats to within a goal, but Moose Jaw scored into an empty net to seal the 5-3 victory. Ryder Korczak led the Warriors with three points and Bailey Brkin made 43 saves in goal. Max Paddock stopped 21 of 25 for Regina.