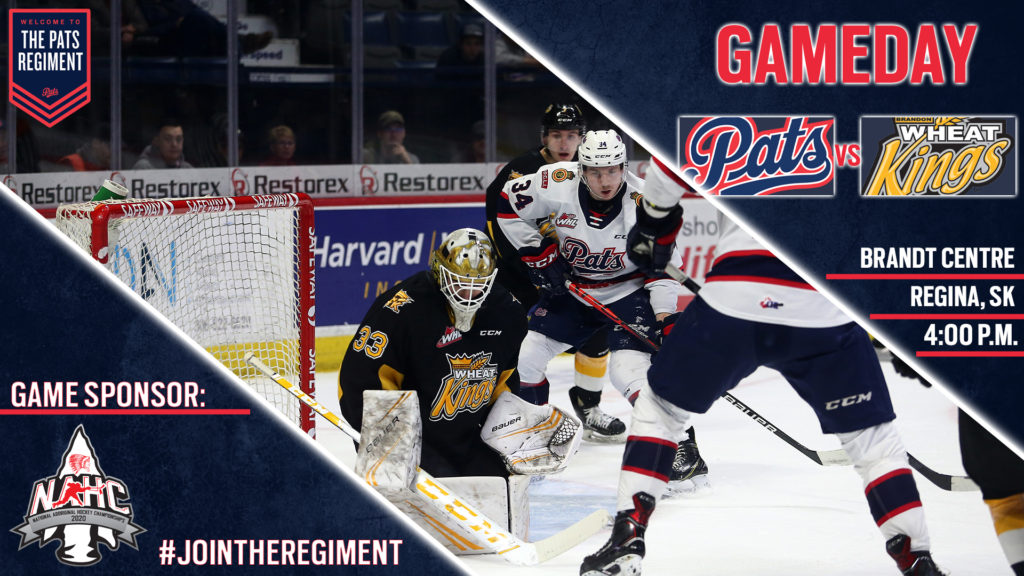 The Regina Pats (19-31-4-2) wrap up a week of five games in seven days on Sunday afternoon when they host the Brandon Wheat Kings (31-21-3-2). Puck drop is at 4:00 p.m. at the Brandt Centre. The Pats were last in action Saturday night when they grabbed a single point in a 2-1 overtime loss to the Edmonton Oil Kings. The Wheat Kings hosted Prince Albert on Saturday and dropped a 2-1 decision. Tonight is the fifth of six meetings between Regina and Brandon, the Pats are 1-3-0-0 so far in the season series. The game can be heard with Bennett Dunlop Ford Pats Hockey starting at 3:35 p.m. on 620 CKRM.

Quick Facts
– The Pats are 5-3-0-2 in their last 10 games against the Wheat Kings and 3-2-0-0 in their last five at home.
– Regina is 8-4-3 in their last 15 home games.
– Austin Pratt leads the Pats with 13 points in 27 career games against Brandon.
– The Pats are 4-5-1-0 in the month of February.
– Zach Wytinck picked up the 94th assist of his career on Saturday against Edmonton.
– Donovan Buskey stopped 27 of 28 in relief on Saturday to secure the Pats a point against the Oil Kings.
– Austin Pratt is riding a four-game point streak with two goals and three assists in that stretch.

Four Gamer
Pats Captain Austin Pratt extended his point streak to four games on Saturday night with a second period goal, his 18th of the year, which tied the game at one. The 20-year-old has two goals and three assists over the point streak and has re-taken the team lead in scoring with 49 points in 56 games. He is two points away from matching his career high season of 51 points, which he set last year in 68 games.

Wytinck Contributing
Pats defenceman Zach Wytinck picked up his 42nd point of the season on Saturday night against Edmonton. The 20-year-old is enjoying a strong second half to the season with 20 points, three of them goals, in 23 games. He enters Sunday tied for ninth among all WHL defencemen with 42 points and his 36 assists are alone in seventh.

Last Pats Game
The Regina Pats earned a point on home ice Saturday in a 2-1 overtime defeat at the hands of the Edmonton Oil Kings at the Brandt Centre. In the first, Edmonton outshot Regina 13-2, but Danton Belluk stood tall making 12 saves. The lone goal that got by him was on the powerplay from Jake Neighbours and it was 1-0 Oil Kings after one. Belluk was forced to leave the game after the first and so Donovan Buskey came into the game to start the second. The Pats found the tying goal at 17:23 of the period when Austin Pratt jammed in his 18th from the side of the net and it was 1-1 after 40 minutes. In the third, Donovan Buskey stopped all 12 shots he faced, securing a point for Regina in a game that went to overtime tied at one. In the extra frame, the Oil Kings got the winner from Josh Williams at 4:13 and they took the extra point in a 2-1 final. The Pats were outshot 41-16, the powerplay was oh for two, the penalty kill three for four, while Danton Belluk and Donovan Buskey combined to make 39 saves.

Last Pats Game Vs Brandon
February 17, 2020 – Drew Englot scored the lone Regina goal in a 2-1 home defeat to Brandon. The Wheat Kings got goals from Ben McCartney and Luka Burzan in the win. Donovan Buskey made 22 saves for the Pats, Ethan Kruger 25 saves for Brandon.