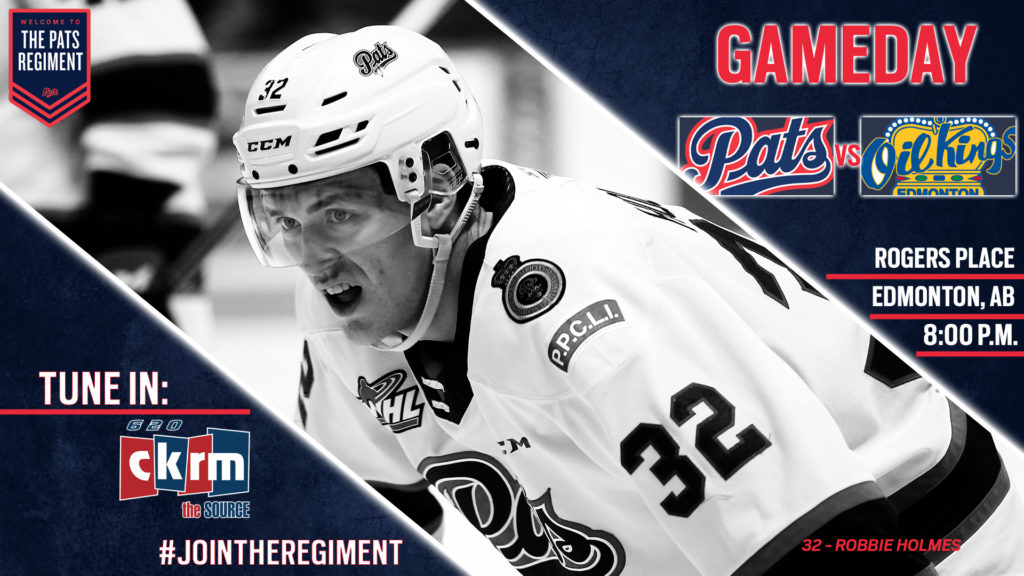 The Regina Pats (18-28-3-2) will wrap up their three game Central Division road trip on Friday night when they visit the Edmonton Oil Kings (38-8-6-3). Puck drop is at 8:00 p.m. Regina time at Rogers Place. The Pats are looking to bounce back from an 8-1 loss in Calgary to the Hitmen on Wednesday night. The Oil Kings last game was on Friday when they extended their win streak to four games with a 2-1 victory over the Red Deer Rebels. Tonight is the third of four meetings between Regina and Edmonton, the Pats are 0-2-0-0 so far in the season series. The game can be heard with Bennett Dunlop Ford Pats Hockey starting at 7:35 p.m. on 620 CKRM.

Quick Facts
– The Pats are 4-5-1-0 in their last 10 games against Edmonton and are 2-3-0-0 in their last five visits to Rogers Place.
– The Pats are 3-2-0-0 in the month of February, winning once at home and twice on the road.
– Austin Pratt leads Regina with 14 career points in 23 games against the Oil Kings.
– Regina is 10-10-1 in their 21 games since the Christmas Break.
– Carson Denomie recorded his team leading 20th powerplay point on Wednesday in Calgary and is now tied with Austin Pratt for the team lead in scoring with 44 points on the year.
– Zach Wytinck picked up his 16th powerplay assist on Wednesday, which leads the team.
– Cole Dubinsky has 10 of his 16 points this season in the 21 games since the Christmas break.

Powerplay Specialist
Pats forward Carson Denomie set up Cole Dubinsky for a powerplay goal on Wednesday in Calgary to reach 20 points on the man advantage this season. The 19-year-old has scored nine times on the powerplay and has 11 assists through 53 games this season. He has five powerplay goals and 15 points in 34 games since being traded to Regina, he put up four powerplay markers and five points on the man advantage with Moose Jaw to start the year. With the assist Wednesday, Denomie has tied Austin Pratt for the team lead in scoring with 44 points and he leads the club with 20 goals on the year. In the second half, he leads the Pats with 12 goals and 21 points in 21 games.

Dubinsky’s Second Half
Pats forward Cole Dubinsky is enjoying a good offensive stretch in the second half of the year. The 17-year-old scored his fourth goal of the campaign on Wednesday in Calgary and has put up three goals and 10 points in 21 games since Christmas. The product or Ardrossan, Alberta had one goal and five assists in his first 25 games.

Last Pats Game
The Regina Pats dropped an 8-1 decision in Calgary to the Hitmen on Wednesday night at Scotiabank Saddledome. In the first, Mark Kastelic scored a hat trick for Calgary and Kyle Olson added a single and it was 4-0 Hitmen after the opening frame. In the second, the Hitmen added three more to take a 7-0 lead, before the Pats broke through on the powerplay. Carson Denomie set up Cole Dubinsky who scored his fourth to make it 7-1. Calgary responded with another marker and took an 8-1 lead to the break. In the third, both teams fired seven shots on goal, but there were no goals and the Hitmen skated away with the 8-1 victory. The Pats were outshot 38-14, the powerplay was one for four, the penalty kill two for four, while Danton Belluk and Donovan Buskey combined to make 30 saves.

Last Pats Game Vs Edmonton
December 1, 2019 – Robbie Holmes scored the Pats lone goal in the second period on the powerplay in a 7-1 road loss to the Oil Kings. Edmonton was led by Vladimir Alistrov and Tyler Horstmann who each had a goal and two assists, while Dylan Guenther, Jalen Luypen and Josh Williams had two points in their victory. Donovan Buskey made 26 saves for Regina in the loss, Sebastian Cossa stopped 32 of 33 shots for Edmonton.