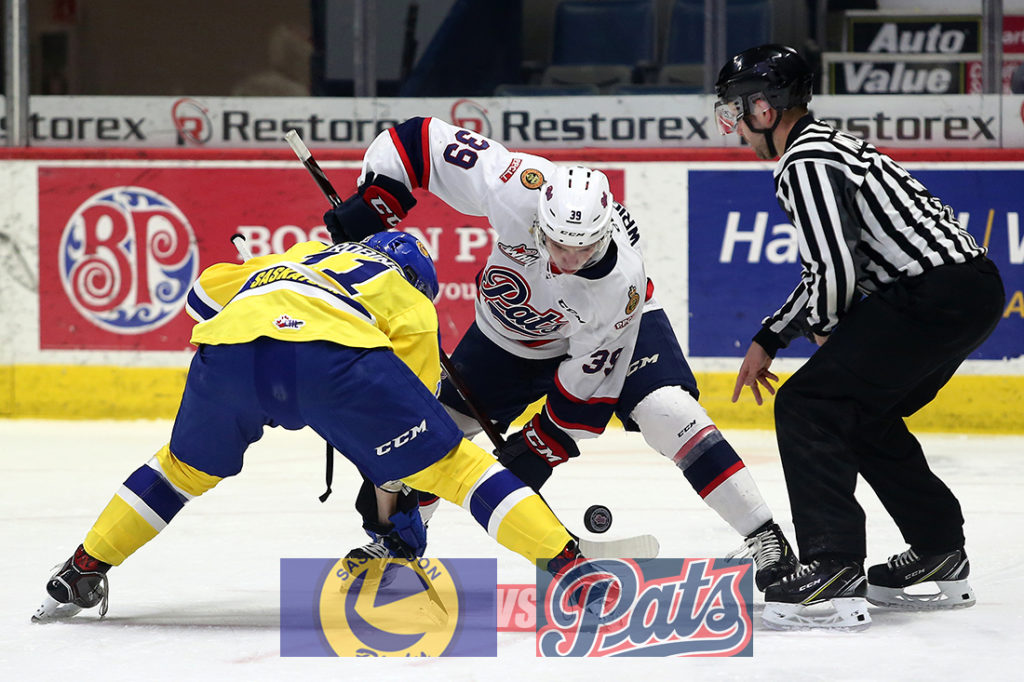 The Regina Pats (18-40-1-2) are on the road Friday night to wrap up their season series with the Saskatoon Blades (39-14-8-0). Puck drop is at 7:00 p.m. at the SaskTel Centre. The Pats were last in action on Wednesday, losing 5-2 at home to the Red Deer Rebels. The Blades last game was on Tuesday when they won at home against the Lethbridge Hurricanes 6-4. Tonight is the sixth and final meeting between Regina and Saskatoon in 2018-19, the Pats are 1-3-1-0 in the season series. Tonight’s game can be heard with Bennett Dunlop Ford Pats Hockey starting at 6:35 p.m. on 620 CKRM and the game will be broadcast on Access 7.

The Lead Up: Pats push in the third but fall 5-2 to Red Deer Wednesday
The Regina Pats pushed hard in the third but dropped a 5-2 decision at home to the Red Deer Rebels on Wednesday night at the Brandt Centre. In the first, the Rebels opened the scoring 10 minutes in thanks to Alexander Alexeyev. The Pats found a tying goal four minutes later, Cole Dubinsky stole a puck at centre, skated in one on one and scored his fourth of the year from the left circle to make it 1-1. The Rebels restored the lead with 40 seconds left in the frame and it was 2-1 after 20 minutes. In the second, Red Deer went up 3-1 early on a goal from Ethan Sakowich, and then at the six-minute mark, Brett Davis scored, and the Rebels led 4-1. That was the score through 40 minutes. In the third, the Pats struck on the powerplay with 3:15 left, Brady Pouteau scored his fifth from the left circle to cut the Red Deer lead to 4-2. The Rebels sealed the victory with an empty net goal late, taking the two points in a 5-2 final. The Pats outshot the Rebels 34-27, the powerplay was one for five, the penalty kill went two for two, while Max Paddock made 22 saves.

Best Month
The Pats enjoyed their most successful month of the season in February, going 5-6-0-0, including a stretch where they won five of eight games from February 5-22. The Pats had three times won four games in a month (October, November and December) but played their best hockey over the last 28 days. Regina averaged 2.91 goals for per-game in the month, up from their season average of 2.64 goals per game. Conversely, the Pats gave up an average of 3.27 goals in February, down from the season average of 3.98 goals against. The Pats penalty kill allowed just five goals on 44 shorthanded situations in February (88.6%), scoring three shorthanded goals. The powerplay was seven for 42 in the month (16.6 %). Austin Pratt led the club with four goals and nine points in the 11 games, Ty Kolle and Brady Pouteau each had six points. Max Paddock and Dean McNabb combined to put up a .917 save percentage in February.

Pouteau Rolling
Pats defenceman Brady Pouteau continued his offensive output on Wednesday with a third period goal. The 20-year-old has scored three times and has two assists for five points in his last five games. Six of the overager’s 13 points on the season have come in his last eight games. He is second on the team in defence scoring, three points back of Nikita Sedov who has put up 16 points on the year. The product of Oak Bluff, Manitoba is playing his 195th Western Hockey League game in Saskatoon Friday, he has nine goals and 45 points in his career.