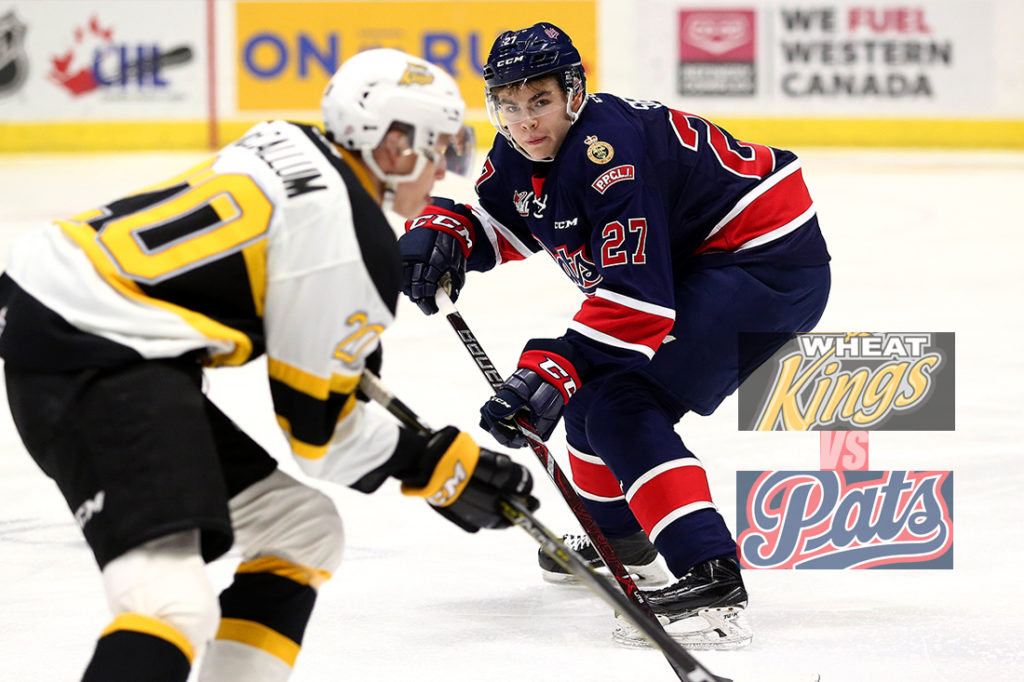 The Regina Pats (8-17-0-0) wrap up a stretch of seven straight road games on Friday night when they visit the Brandon Wheat Kings (11-7-3-3). Puck drop is at 7:30 p.m. at Westoba Place. The Pats are coming off a 5-3 loss in Prince George last Friday to wrap up their West coast road trip. The Wheat Kings were in Swift Current on Wednesday and picked up a 5-1 win. Tonight is the second of eight meetings between Regina and Brandon, the Wheat Kings are 1-0-0-0 in the season series. Tonight’s game can be heard with Bennett Dunlop Ford Pats Hockey starting at 7:05 p.m. on 620 CKRM.

The Lead Up: Pats finish West coast swing with loss in Prince George
The Regina Pats closed out their west coast road trip with a 5-3 loss in Prince George to the Cougars on Friday night. In the first, the Cougars opened the scoring while shorthanded at 5:58 thanks to Jackson Leppard to make it 1-0. Prince George added another at 11:40 from Joel Lakusta and it was 2-0 Prince George after one. In the second, Nick Henry scored a hat trick in the span of 6:59 in the second. His 13th, 14th and 15th goals of the year. The Cougars got one in there as well and it was a 3-3 game. Regina got into some penalty trouble after that and the Cougars scored on a 5 on 3 powerplay to lead 4-3 after two periods. In the third, the Pats threw everything at the Cougars, hit two posts, but could not find the tying marker. Prince George would score into an empty net late and take the game 5-3.

Pats acquire Clayton and Pick from Tri-City
The Regina Pats acquired 20-year-old forward Brett Clayton and a third-round pick in 2019 from the Tri-City Americans in exchange for 20-year-old defenceman Aaron Hyman on Monday. Clayton has played 163 games in the Western Hockey League between the Portland Winterhawks and Tri-City Americans. The product of Abbotsford, B.C. has nine goals and 21 assists in his career. Hyman was acquired by the Pats in January of 2018. The 20-year-old is enjoying a career year with five goals and 24 points in 25 games this season.

Streu to Germany for World Junior Qualifier
Pats forward Sebastian Streu has left to play for Team Germany at the 2019 Division 1, Group A World Juniors that begin December 9 in Fussen, Germany. It is the qualifying tournament and Streu will be looking to help his country earn a spot in the World Junior Hockey Championships in 2020 after being relegated last year.