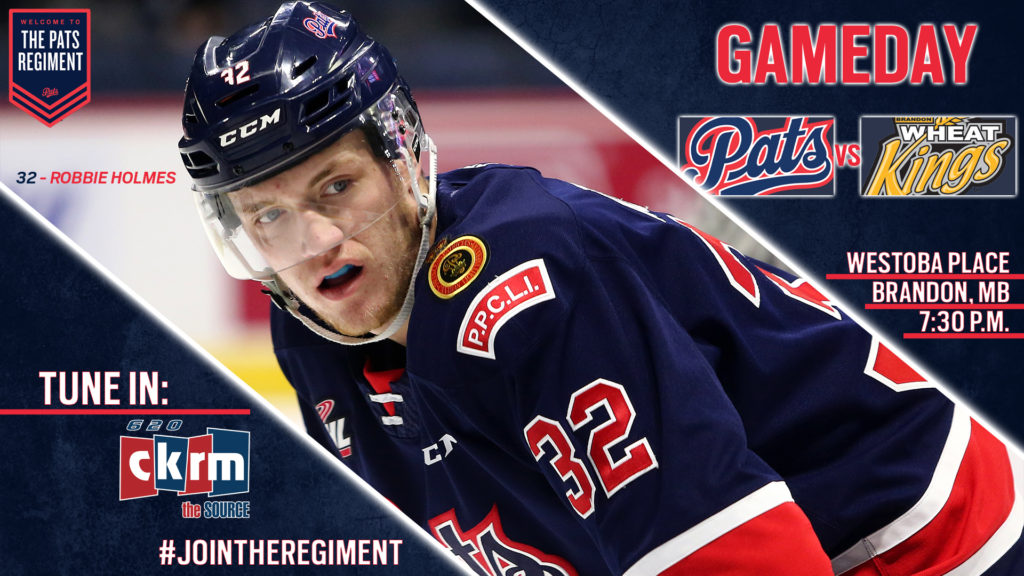 The Regina Pats (4-14-2-0) conclude a stretch of four games in five nights on Saturday when they visit the Brandon Wheat Kings (11-13-1-0). Puck drop is at 7:30 p.m. at Westoba Place. The Pats were last at it on Friday night when they picked up a 6-0 win in Swift Current over the Broncos. The Wheat Kings hosted the Calgary Hitmen on Friday and fell 4-3 in overtime. Tonight is the first of six meetings between Regina and Brandon, the Pats went 4-2-0-2 in the season series in 2018-19. The game can be heard with Bennett Dunlop Ford Pats Hockey starting at 7:05 p.m. on 620 CKRM.

Quick Facts
– The Pats and Wheat Kings will meet for the first time this season, Regina won four times last year against Brandon and picked up four of eight possible points on the road.
– The Pats are 3-4-2-0 in their last nine games.
– Robbie Holmes scored his first career WHL hat trick on Friday night in Swift Current.
– Carson Denomie picked up his first two assists in a Pats uniform against the Broncos.
– Drew Englot recorded two assists Friday, the first two helpers of his WHL career.
-Max Paddock made 25 saves for his third career shutout Friday against the Broncos.
-The Pats snapped an 0-16 stretch on the powerplay with three goals in Swift Current.

Holmes Big Night
Pats forward Robbie Holmes picked up the first hat trick of his WHL career on Friday night in Swift Current. The 20-year-old scored twice in the first period and once in the second to complete the feat. Holmes had scored twice in a game, three times previously in his career. He is up to eight goals on the season, which is tied for second on the team.

Firsts
Forward Carson Denomie picked up the first two points of his Pats career on Friday with a pair of first period assists on the powerplay. The 19-year-old is up to 15 points in 22 games this season, split between Moose Jaw and Regina. Forward Drew Englot also had two assists Friday, the first two helpers of his WHL career. The 17-year-old has two goals and four points in his rookie campaign.

Last Pats Game
Robbie Holmes recorded his first career hat trick and Max Paddock did the rest making 25 saves as the Pats shutout the Broncos 6-0 in Swift Current on Friday night. In the first, the Pats opened the scoring just prior to the 10-minute mark when Riley Krane picked up his fourth. Robbie Holmes added to the lead with two powerplay goals, his sixth and seventh of the season and Regina lead 3-0. In the second, the powerplay struck again, Nikita Sedov tapped in his second of the year to make it 4-0. Robbie Holmes completed his first career hat trick late in the second, his eighth of the campaign, and the Pats took a 5-0 lead to the second intermission. In the third, Zack Smith picked up his third of the season off a rebound and that concluded the scoring in a 6-0 Pats win. The Pats outshot the Broncos 55-25, the powerplay was three for five and the penalty kill went five for five. Robbie Holmes led the offence with three goals, while Max Paddock made 25 saves for his third career shutout.

Last Pats Game Vs Brandon
March 16, 2019 – Ty Kolle scored twice and added an assist, while Ryker Evans and Sebastian Streu had two-point games for the Pats in a 5-4 shootout loss in Brandon. The Wheat Kings were led by Connor Gutenberg who had a goal and four points. Max Paddock made 38 saves for Regina, Ethan Kruger 34 for Brandon.