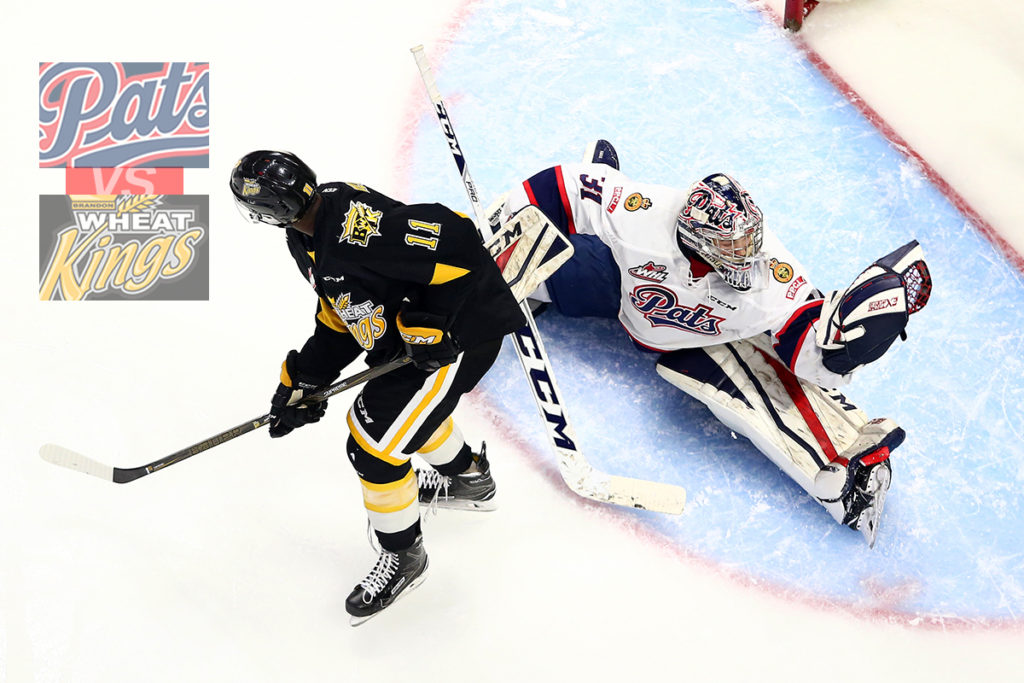 The Regina Pats (51-12-7-1) wrap up the 2016-17 regular season tonight on the road against the Brandon Wheat Kings (31-30-7-3). Puck drop is 7 p.m. at the Brandt Centre. The Pats beat the Wheat Kings in the front half of their home and home set on Friday night, 7-1, for a seventh straight win. The Pats carry a 5-1-0-1 record against Brandon into tonight’s eighth and final meeting on the season. The game can be heard on 620 CKRM with Bennett Dunlop Ford Pats Hockey beginning at 6:05 p.m.

Lead Up: Pats Win 7th in a Row Friday
The Regina Pats closed out their home regular season schedule with a 7-1 win over the Brandon Wheat Kings on Friday night. The Pats scored twice in the first, four times in the second and once in the third in the win. Sam Steel scored his 50th of the season while Adam Brooks had two goals and two assists to lead the Regina offence. Austin Wagner chipped in with a goal and two assists. Goaltender Tyler Brown made 21 saves for his 33rd victory and the Pats improved to 51-12-7-1 on the season. Regina outshot Brandon 36-22, the powerplay was two for four and the penalty kill four for four with a shorthanded goal. The Pats also learned their first round playoff opponent will be the Calgary Hitmen on Friday.

Head to Head
The Pats are 5-1-0-1 against Brandon this season with four wins coming at the Brandt Centre, one win and two losses in Brandon. The Pats have scored 32 goals to the Wheat Kings 18 in the first seven matchups. The Pats have outshot Brandon 296-210 in the seven games, the powerplay has gone 12 for 34 and the penalty kill 31 for 36. Adam Brooks leads the way with seven goals and 16 points against the Wheat Kings. Sam Steel is next with 13 points while Connor Hobbs has 11 and Dawson Leedahl and Austin Wagner have seven in the season series. Goaltender Tyler Brown is 4-0-0-1 in five starts and holds a 1.97 goals against average and a .933 save percentage. Tyler Coulter leads the Wheat Kings with five goals and two assists against Regina. Stelio Mattheos and Connor Gutenberg each have six points.

50 Goals
Pats forward Sam Steel became the first Pats player to reach the 50 goal mark since Jordan Eberle in 2009-10. Steel reached the milestone on Friday night with a powerplay goal in the first period. Steel enters the final game of the season leading the WHL with 131 points in 65 games. Four ahead of teammate Adam Brooks who has 127 points.

Playoff Opponent
Friday night, the Calgary Hitmen beat the Kootenay ICE to clinch the final playoff spot in the Eastern Conference. The Pats will take on the Hitmen in round one of the post-season starting on Friday March 24. The Pats will host game two on the 25th before the series shifts to Calgary for games three and four on the 28th and 30th of March. The Pats were 3-1-0-0 in the regular season series with the Hitmen this year.