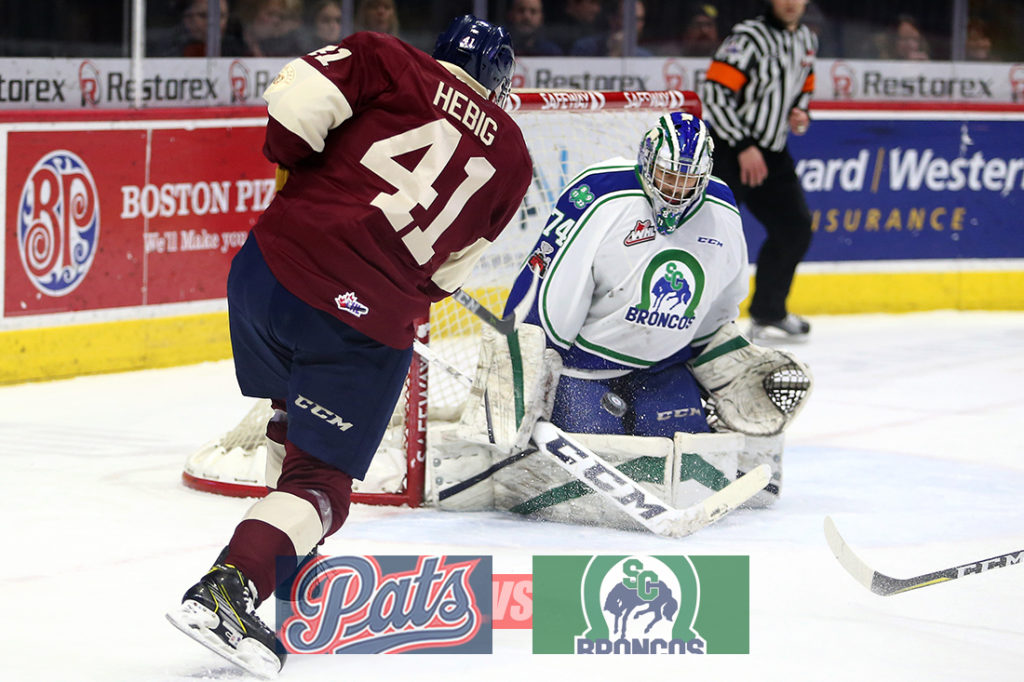 The Regina Pats (39-25-5-1) host their final home game of the regular season on Friday night against the Swift Current Broncos (47-17-4-2). Puck drop is at 7 p.m. at the Brandt Centre. The Pats are riding a six game win streak entering Friday night, most recently beating the Prince Albert Raiders 3-2 in a shootout Wednesday. The Broncos meanwhile dropped a 5-2 decision to Saskatoon on Wednesday and have lost three straight. Tonight is the fifth of six meetings on the season between the Pats and Broncos, Regina holds a 0-4-0-0 record in the season series. The game can be heard starting at 6:35 with Bennett Dunlop Ford Pats Hockey on 620 CKRM and will be broadcast on Access 7.

The Lead Up: Pats down Raiders in shootout for sixth straight win
The Regina Pats earned a sixth straight win, 3-2 in a shootout over the Prince Albert Raiders on Wednesday night at the Brandt Centre. Prince Albert led 1-0 after 20 minutes, but Sam Steel tied it up in the second with his 32nd of the year. That point pushed him past Adam Brooks into solo 10th on the Pats franchise scoring list with 336 points. The Raiders got that goal back however later on in the second and led 2-1 heading to the third. In the final frame, Sam Steel set up Cameron Hebig for his 41st of the season, it came shorthanded and the game needed overtime in a 2-2 tie. The extra frame solved nothing and in the shootout Jesse Gabrielle scored the lone marker to give the Pats the 3-2 win.

Head to Head
Tonight is the fifth of six meetings between the Pats and Broncos, Regina holds a 0-4-0-0 record so far in the season series. The Broncos have outscored the Pats 16-7 through the first four games. Cameron Hebig has 12 points against Swift Current this year, 11 of those as a member of the Saskatoon Blades. Cale Fleury and Matt Bradley are next with four points. The Broncos Aleksi Heponiemi has eight points against Regina and Glenn Gawdin has seven points.

Alone in 10th
Thanks to his two point performance on Wednesday, Pats captain Sam Steel sits alone in 10th on the franchise all-time scoring list with 337 points. The signed Anaheim Ducks prospect needed just 257 games to reach the milestone. Steel is five points back of Louis Dumont (342 points) for ninth on the Pats franchise scoring list. The 19-year-old’s 215 career assists ranks sixth all-time in Pats history. He enters Friday on a 12 game point streak with 11 goals and 10 assists.