PREVIEW: Pats back on home ice Tuesday to take on Moose Jaw 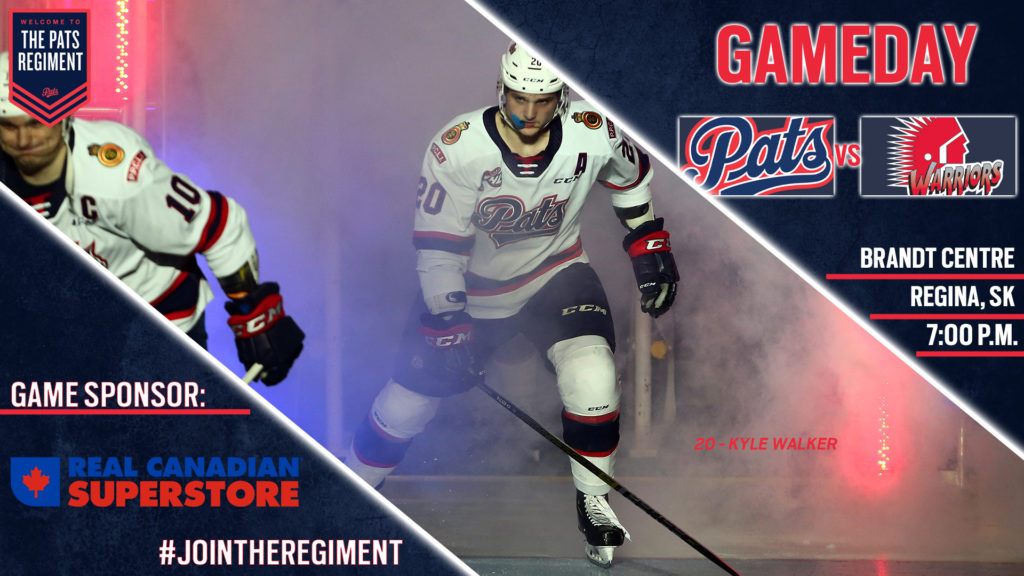 The Regina Pats (20-33-4-2) are back on home ice on Tuesday night for a matchup with division rival Moose Jaw Warriors (14-40-4-0). Puck drop is at 7:00 p.m. at the Brandt Centre. The Pats were last in action on Saturday when they lost a 2-0 decision in Medicine Hat to the Tigers. The Warriors last game was Sunday, a 3-2 defeat at home to the Prince Albert Raiders. Tonight is the sixth of eight meetings on the year between Regina and Moose Jaw, the Pats are 3-2-0-0 so far in the season series. The game can be heard with Bennett Dunlop Ford Pats Hockey starting at 6:35 p.m. on 620 CKRM and will be broadcast on Access 7.

Quick Facts
– The Pats are 3-7-0-0 in their last 10 meetings with Moose Jaw, but Regina has won three of the last five.
– Regina finished the month of February with a 5-7-1-0 record.
– Austin Pratt and Robbie Holmes lead the Pats with 10 career points against Moose Jaw.
– Donovan Buskey is 8-10-1-0 in his 19 starts since the WHL Trade Deadline.
– The Pats have re-called 17-year-old goaltender Spencer Welke for the remainder of the season. .

Head to Head
The Pats are 3-2-0-0 against Moose Jaw this year, winning twice at home and once on the road in the season series. The Pats have scored 16 goals in the first five games and given up 12. Regina has gone two for 12 on the powerplay in the first five meetings and killed 27 of 31 shorthanded situations. The Pats have outshot Moose Jaw 171-133 so far this year. Austin Pratt has put up two goals and four assists against the Warriors, Riley Krane has two goals and two assists while Zach Wytinck and Robbie Holmes both have four points. The Warriors are led by Ryder Korczak who has a goal and five points in the five games, Daemon Hunt has three points and Chase Hartje has two.

Month by Month
The Pats picked up another five wins in the Month of February to reach the 20-win mark for the season, one more victory then they had all of 2018-19. The Pats have won 12 games since the Christmas break, winning five in January and two to end December. Since the team’s 1-10-0-0 start, the club has gone 19-23-4-2 to puck up 44 points in the standings.

Last Pats Game
Donovan Buskey made 40 saves in the Regina Pats 2-0 loss in Medicine Hat to the Tigers on Saturday night. In the first, the Pats were outshot 15-9 and Donovan Buskey was stellar in goal. The 19-year-old made some big saves late in the frame when the Tigers had a five on three powerplay and it was scoreless after 20 minutes. In the second, Buskey continued his stellar play making 17 saves in the frame. However, Medicine Hat found the game’s first goal at 16:51 off the stick of Lukas Svejkovsky and it was 1-0 after two periods. In the third, Medicine Hat went up 2-0 in the early going on a goal from Corson Hopwo. The Pats put nine shots on goal in the third but couldn’t break through and the Tigers took the game, 2-0 the final score. The Pats were outshot 42-18, the powerplay was oh for one, the penalty kill six for six and Donovan Buskey made 40 saves in a first star effort.

Last Pats Game Vs Moose Jaw
December 28, 2019 – Max Paddock stopped all 30 shots he faced in the Pats 5-0 shutout win over Moose Jaw at the Brandt Centre. Austin Pratt, Logan Nijhoff, Ryker Evans and Zach Wytinck each had two points in the victory.