PREVIEW: Pats back on home ice to take on Red Deer Sunday 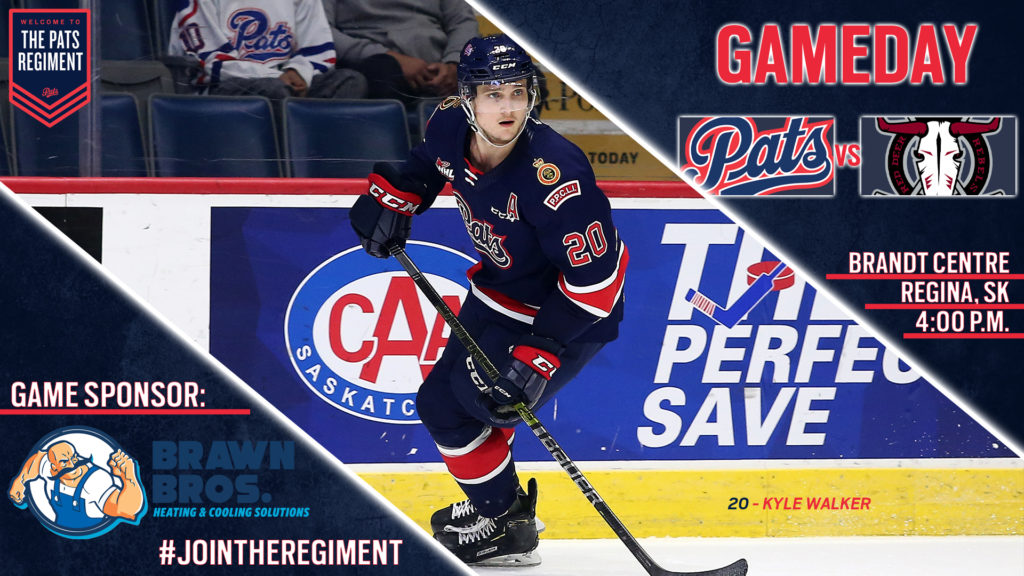 The Regina Pats (2-11-1-0) will wrap up a two-game weekend on Sunday when they host the Red Deer Rebels (4-8-0-2). Puck drop is at 4:00 p.m. at the Brandt Centre. The Pats last game was on Friday night in Prince Albert when they took a 2-1 lead to the third but fell 6-3 to the Raiders. The Rebels were in Moose Jaw on Friday and dropped a 5-2 decision to the Warriors. Tonight is the second of four meetings between Regina and Red Deer, the Pats are 1-0-0-0 in the season series. The game can be heard with Bennett Dunlop Ford Pats Hockey starting at 3:35 p.m. on 620 CKRM.

Quick Facts
-The Pats are 6-2-1-1 in their last 10 meetings with the Red Deer Rebels, including 1-0-0-0 this season.
-Five of the last 10 matchups between the Pats and Rebels have gone to overtime or a shootout.
-The Pats are 1-4-1-0 against Central Division opponents so far in 2019-20.
-Drew Englot scored his first career WHL goal on Friday in Prince Albert.
-Zack Smith picked up his first career WHL point with an assist against the Raiders Friday.
-Caiden Daley picked up an assist in his Pats debut Friday in P.A.
-Logan Nijhoff is riding a career high five game point streak, he has scored four goals and two assists in that stretch.
-Max Paddock has made 78 saves in the last two games since returning from an upper-body injury.
-The Pats are 1-6-1-0 on home ice this season.
-Regina will play four of their next five games on home ice.

A Night of Firsts
The Regina Pats saw several milestones reached on Friday against the Prince Albert Raiders. In the second period, Drew Englot scored his first career WHL goal, which tied the game at one. Zack Smith, who was playing in his second WHL game, picked up an assist on the Englot goal for his first career point. Still in the second, Caiden Daley assisted on Logan Nijhoff’s third of the season for his first point in his first game with the Pats.

Nijhoff’s Career High
Pats 18-year-old forward Logan Nijhoff recorded his first career multi-goal game in the WHL on Friday, scoring once in the second and adding another in the third for a two-goal game. Nijhoff has points in five straight games entering Sunday afternoon, he has scored four times and has two assists for six points in the streak. Nijhoff is up to four goals and seven points in 13 games on the season. His career high in goals and points was set last year when he tallied seven goals and 17 points in 59 games.

Last Pats Game
The Regina Pats took a 2-1 lead to the third in Prince Albert on Friday, but fell 6-3 to the Raiders at the Art Hauser Centre. In the first, the Pats were outshot 13-12 but the game was scoreless after the opening stanza. The Raiders took a 1-0 lead early in the second thanks to Spencer Moe, but five minutes later Drew Englot scored his first goal of his WHL career to tie the game for Regina. It stayed 1-1 until late in the frame, when Logan Nijhoff scored his third of the year and the Pats took a 2-1 lead into the second intermission. In the third, the Raiders scored twice on the powerplay and added two more even strength to take a 5-2 lead. The Pats got one back from Logan Nijhoff, his second of the night and fourth of the season, with 2:27 left to play and it was 5-3. The Raiders would seal the victory with an empty netter in what was a 6-3 final. The Pats were outshot 41-26, the powerplay was oh for three, the penalty kill was two for four, Logan Nijhoff led the offence with two goals and Max Paddock made 35 saves.

Last Pats Game Vs Red Deer
October 19, 2019 – Zach Wytinck recorded a career high four assists and scored the shootout winner to lead the Pats to a come from behind 6-5 shootout win in Red Deer. The Rebels led 4-1 in the second period, but the Past battled back and picked up the two points. Austin Pratt, Robbie Holmes and Ty Kolle each had two-point nights for Regina. The Rebels were led by Cameron Hausinger and Mason Ward who each put up two points.