PREVIEW: Pats back in action Wednesday night in Swift Current 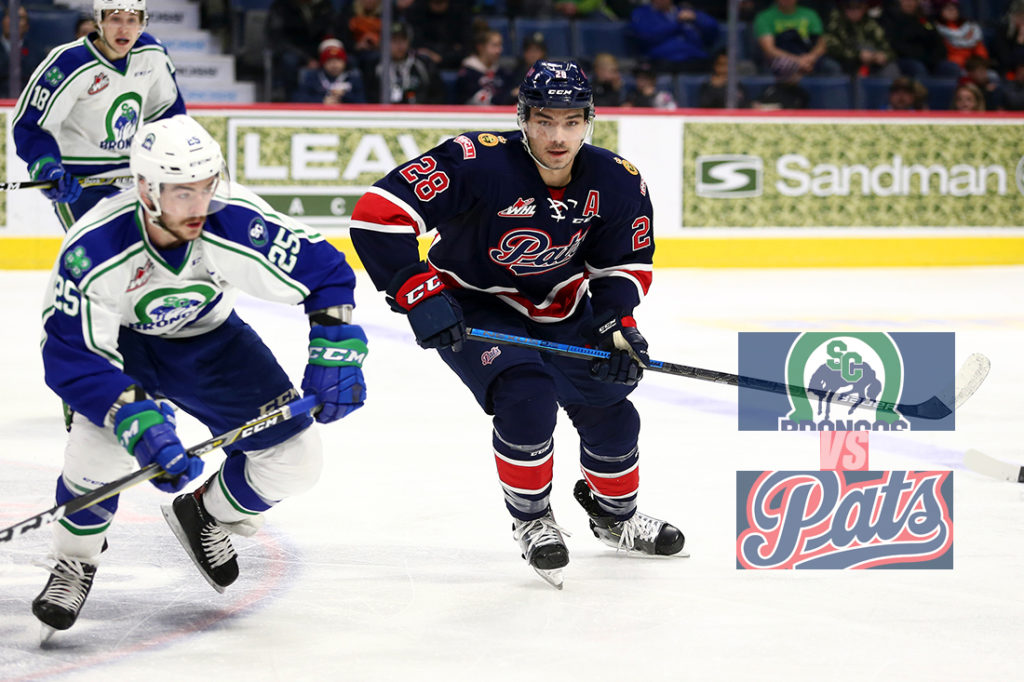 The Regina Pats (8-22-0-1) play a fourth straight road game on Wednesday night against the Swift Current Broncos (5-23-1-1). Puck drop is at 7:00 p.m. at the Innovation Credit Union Iplex. The Pats were last in action on Saturday in Medicine Hat and fell 4-2 to the Tigers. The Broncos last game was a 6-2 loss in Red Deer to the Rebels on Saturday night. Tonight is the fourth of six meetings between Regina and Swift Current, the Pats are 3-0-0-0 so far in the season series. Tonight’s game can be heard with Bennett Dunlop Ford Pats Hockey starting at 6:35 p.m. on 620 CKRM, the game will also be broadcast on Access 7.

The Lead Up: Dean McNabb solid in Pats 4-2 loss Saturday
The Regina Pats got 42 saves from Dean McNabb but fell 4-2 in Medicine Hat on Saturday night. In the first, the Tigers outshot the Pats 15-7, but Dean McNabb was solid in the Regina goal to keep the game scoreless after 20 minutes. Early in the second, the Pats top line combined to get the game’s first goal. Jadon Joseph finished off his 12th from Ty Kolle and Austin Pratt and it was 1-0. McNabb continued to stand tall to keep the 1-0 lead, but the Tigers finally broke through on their 34th shot of the game, a shorthanded breakaway with 50 seconds left and it was 1-1 after two. In the third, Medicine Hat took their first lead 1:50 in. The Pats got it back seven minutes later when Sergei Alkhimov buried his seventh from the slot to make it 2-2. The Tigers responded five minutes after that to make it 3-2 and added another 1:16 later to go up 4-2, that was the final score. The Pats were outshot 46-25, the powerplay was oh for two, the penalty kill two for two and Dean McNabb made 42 saves.

Alkhimov Rolling
Pats rookie forward Sergei Alkhimov is coming off a successful weekend where he scored in consecutive games. The 17-year-old scored the Pats first goal in Red Deer on Friday and then picked up Regina’s second goal of the game in Medicine Hat on Saturday. The product of Moscow, Russia has three goals in his last four games, which snapped a stretch of 12 in a row without a goal. Alkhimov is up to seven goals and 12 points in 30 games. His seven goals are tied for fifth most among WHL rookies and his 12 points are tied for 19th overall.

Top Line Working
The Pats top line of Austin Pratt, Jadon Joseph and Ty Kolle are finding a way to contribute on a nightly basis. The trio has combined to score five goals and seven assists for 12 points in six games since they were put together. Pratt has two goals and two assists in that stretch, Joseph two goals and two helpers, while Kolle has a goal and three assists. The three lead the Pats in scoring, Pratt with 27 points, Joseph with 23 and Kolle with 16 points.

Secondary Scoring
Pats forwards Scott Mahovlich and Logan Nijhoff found their way onto the scoresheet over the weekend. Mahovlich had a goal and an assist in two games against Red Deer and Medicine Hat, while Nijhoff put up an assist in both games. Nijhoff is up to seven assists and eight points on the year, Mahovlich has four goals and six points.