PREVIEW: Pats back in action Tuesday night in Kamloops 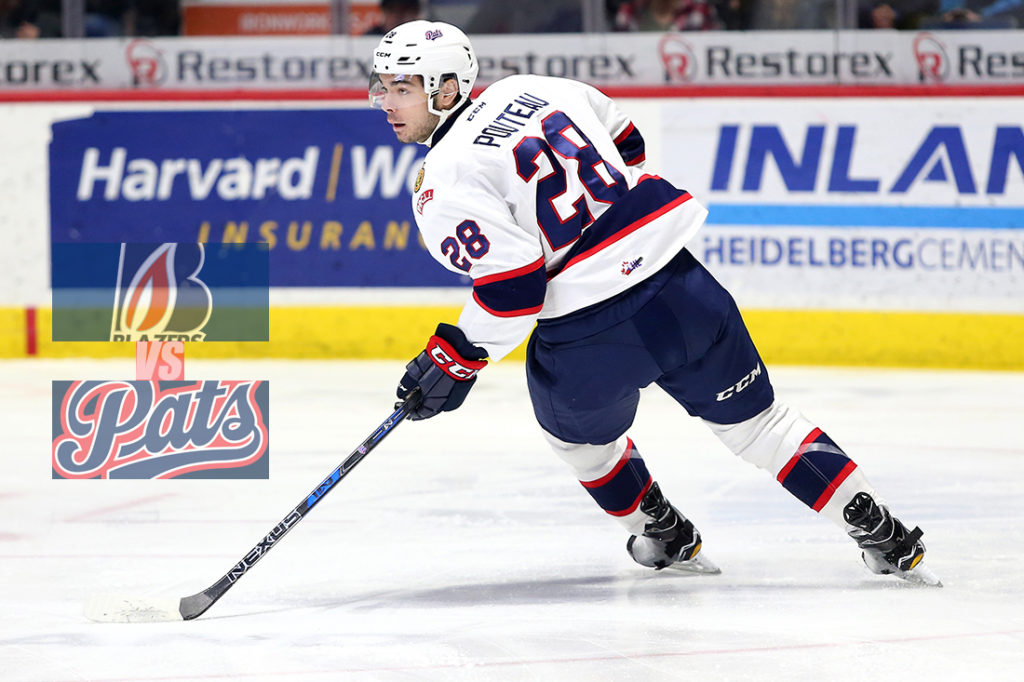 The Regina Pats (7-15-0-0) continue their B.C. Division road trip on Tuesday night against the Kamloops Blazers (8-9-1-1). Puck drop is at 9:00 p.m. Regina time at the Sandman Centre. The Pats are coming off a 2-1 loss in Victoria to the Royals on Saturday night. The Blazers were last in action on Sunday when they beat the Cougars in Prince George 7-3. Tonight is the first and only meeting of the 2018-19 season between the Pats and Blazers. Tonight’s game can be heard with Bennett Dunlop Ford Pats Hockey starting at 8:35 p.m. on 620 CKRM.

The Lead Up: Pats lose on late goal in Victoria Saturday
The Regina Pats gave up a game winning goal late in the third in a 2-1 defeat at the hands of the Victoria Royals on Saturday night. The Pats opened the scoring at 12:57 of the first, when Jake Leschyshyn tipped home his team leading 15th of the season. The Royals powerplay got the game tied at 17:19 of the first, thanks to Kaid Oliver and it was 1-1 after one. The two clubs put six shots on goal apiece in the second and the game remained tied at the break. In the third, it was 1-1 until late when Tanner Sidaway buried his second of the season into the top corner with 2:45 remaining and the Royals took the 2-1 lead. They held on from there for the two points. The Pats were outshot 27-18, the powerplay was oh for three and the penalty kill was six for seven. Max Paddock was named the games second star making 25 saves on 27 shots.

Leschyshyn Streaking
Pats captain Jake Leschyshyn scored the Pats lone goal on Saturday in Victoria and extended his point streak to 10 games in the process. The 19-year-old has 10 goals and eight assists for 18 points in that streak. The signed second round pick of the Vegas Golden Knights enters Tuesday night with 29 points in 21 games this year, which is tied for 14th in overall scoring in the WHL. Leschyshyn leads the Pats with 15 goals, nine of which have come on the man advantage, which is tied for second most in the league. The product of Saskatoon leads the WHL in faceoff percentage at 65.2 percent, for players who have taken more than 60 draws. Leschyshyn is three goals away from matching his previous career high of 18 and is 11 points away from his previous high in points totals of 40.

Pratt Keeps it Going
Pats forward Austin Pratt recorded an assist in Victoria on Saturday and enters Tuesday night riding a six-game point streak. The left winger on the Pats top line has scored three goals and has five assists in that stretch. Pratt, who hails from Lakeville, Minnesota, has 10 goals and 21 points on the year, that is fourth on the team behind Nick Henry (33 points), Jake Lechyshyn (29 points) and Aaron Hyman (22 points). Pratt has fired 76 shots on goal in his first 22 games and owns a shooting percentage of 13.2 per cent. That is second on the team behind Jake Leschyshyn who has scored on 16.1 per cent of his team leading 93 shots on goal.

Mahovlich Returns
Pats forward Scott Mahovlich will make his return to Kamloops for the first time since being traded to Regina during the 2017-18 season. The 19-year-old played 62 games in the Blazer uniform, scoring one goal and five assists to go along with 44 penalty minutes. Mahovlich is off to the best start of a season in his WHL career, already setting a career high in goals with three and is one off his career high in total points. Mahovlich leads the team in fighting majors with three so far this year.