PREVIEW: Pats back in action Friday night at home to the Calgary Hitmen 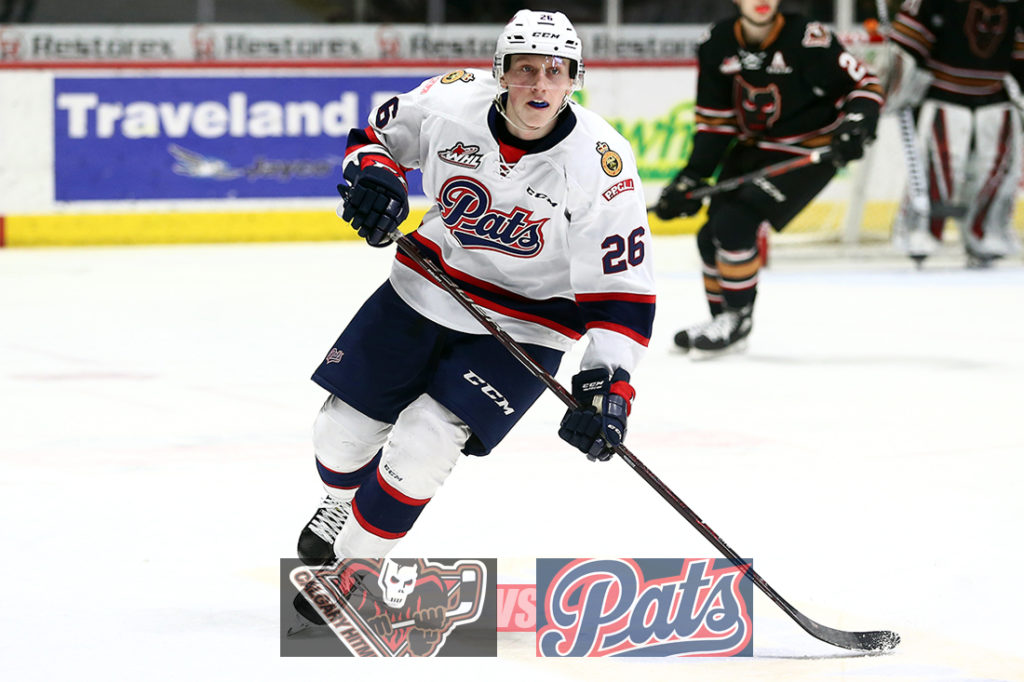 The Regina Pats (17-38-1-2) are back in action at home on Friday night against the Calgary Hitmen (30-22-4-1). Puck drop is at 7:00 p.m. at the Brandt Centre. The Pats are coming off an incredible four goal comeback win over the Kootenay ICE, 5-4 in a shootout on Wednesday. The Hitmen were last in action on Wednesday as well, losing 5-1 in Brandon to the Wheat Kings. Tonight is the fourth and final meeting between Regina and Calgary in 2018-19, the Pats are 1-2-0-0 in the season series. Tonight’s game can be heard with Bennett Dunlop Ford Pats Hockey starting at 6:35 p.m. on 620 CKRM.

The Lead Up: Dean McNabb sparks Pats to four goal comeback win over Kootenay Wednesday
Dean McNabb made 13 saves in a relief appearance and the Regina Pats completed an incredible four goal comeback win, 5-4 in a shootout over the Kootenay ICE Wednesday at the Brandt Centre. The ICE scored the game’s first four goals and led 4-0 with seven minutes left in the second, Dean McNabb came into the game in the Regina net at that point. The Pats got one back with under five minutes left when Brady Pouteau hammered a slap shot from the top of the right circle for his third and it was 4-1 ICE after two periods. In the third, the Pats got to within two on a goal from Brett Clayton, his fourth of the year, eight minutes into the period. Two minutes later, Carter Massier banked in his third of the season and Regina was within a goal with half a period to play. Then, shorthanded with just over three minutes left, Logan Nijhoff stole a puck in the offensive zone and tied the game with his sixth of the year, the game was 4-4 and needed overtime. In the extra frame, Dean McNabb was sensational, stopping all four shots he faced, and the game went to a shootout. In round five, Garrett Wright scored for Regina and Dean McNabb stopped Chase Hartje as the Pats completed an incredible comeback, 5-4 the final.

Schioler’s Big Night
Pats defenceman Liam Schioler picked up two assists on Wednesday against Kootenay. It was just the second time in his WHL career the Winnipeg product has put up two points in a game. The first time he did it, was in his second WHL game against the Moose Jaw Warriors on December 19, 2015. The former second round pick assisted on two third period goals as part of the comeback for Regina and has reached seven points in 56 games on the season.

Pouteau Finding his Touch
Pats overage defenceman Brady Pouteau picked up a goal and an assist on Wednesday for his second multi-point game of the year. He has scored three goals and six assists in 23 games since Christmas, prior to the break he had just two assists in his first 18 games. He missed the first 17 games of the year because of off-season shoulder surgery, but has found his game here in the second half.