PREVIEW: Pats back in action Friday in Swift Current 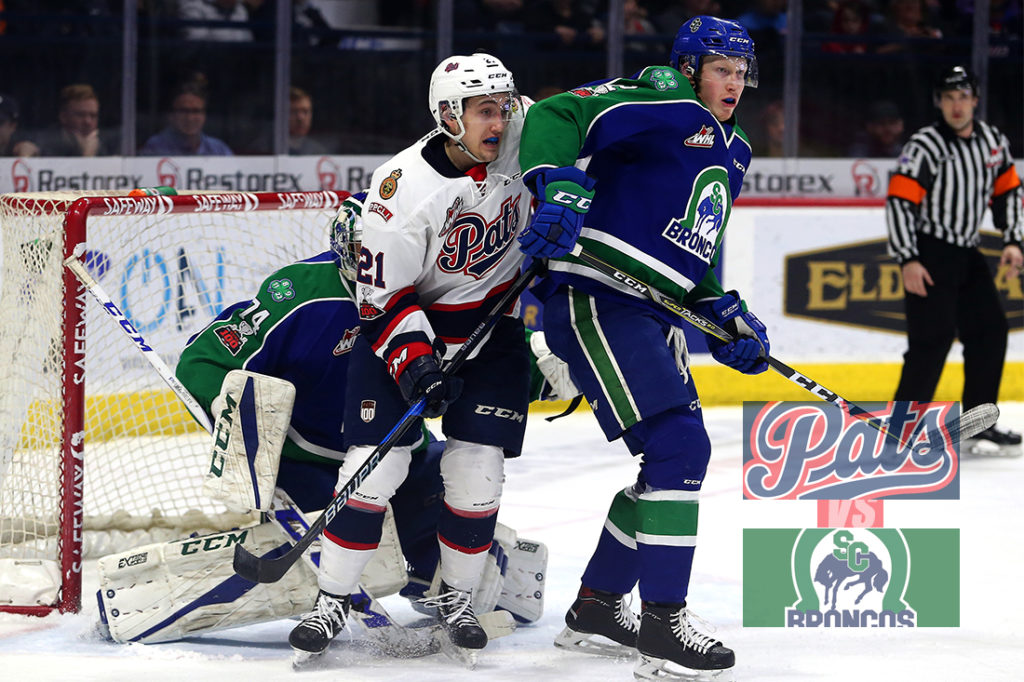 The Regina Pats (0-4-0-0) hit the road on Friday night to take on the Swift Current Broncos (0-4-0-0). Puck drop is at 7 p.m. at the Innovation Credit Union Iplex. The Pats are coming off a 2-1 defeat at the hands of the Moose Jaw Warriors on Sunday. The Broncos were last in action on Saturday in Red Deer and fell 5-2. Tonight is the first of six meetings between the Pats and Broncos in 2018-19. Tonight’s game can be heard with Bennett Dunlop Ford Pats Hockey starting at 6:35 p.m. on 620 CKRM, the game will also be broadcast on Access 7.

The Lead Up: Pats drop tight one to Moose Jaw Sunday
The Regina Pats dropped a tight one, 2-1 at the hands of the Moose Jaw Warriors on Sunday at the Brandt Centre. The Warriors opened the scoring eight minutes in when Tristin Langan banked in his first of the season from the right goal line to make it 1-0. Langan would add another goal in the first on a five-on-three powerplay for Moose Jaw and it was 2-0 at the break. In the second, the Pats drew to within one when Koby Morrisseau buried his first of the year from the left circle and it was a 2-1 game heading to the third. Regina outshot the Warriors 15-7 in the final frame but could not find the tying goal and lost 2-1. The Pats went oh for two on the powerplay, the penalty kill was two for three and Max Paddock was named the game’s second star making 31 saves.

Morrisseau and Sedov get NHL Central Scouting Recognition
Two members of the Regina Pats were among the 110 CHL players ranked by the NHL’s Central Scouting Service for the 2019 NHL Draft. Forward Koby Morrisseau and defenceman Nikita Sedov both came in as ‘C’ skaters as potential fourth to sixth round picks. Morrisseau is a late birthday so this is his first year of eligibility for the NHL draft. The product of Grandview, Manitoba has one goal in three games this year. Sedov was drafted in the second round of the 2018 CHL Import Draft by the Pats and led the team in preseason scoring with seven points in five games.

Zonneveld’s First
Pats rookie defenceman Steven Zonneveld recorded his first career assist in his first Western Hockey League game on Sunday against Moose Jaw. The 17-year-old was listed and signed during the Pats training camp this fall. A product of Calgary, Alberta, Zonneveld kept a puck in at the blueline in the second period on Sunday which led to Koby Morrisseau’s first goal of the season. Last year with the Calgary Flames Midget AAA, Zonneveld scored seven goals and had 11 assists in 35 games.

Faceoff Dominance
Pats captain Jake Leschyshyn has been nearly perfect in the faceoff circle over his last three games. The signed prospect of the Vegas Golden Knights has won 72 per cent of his draws in that stretch (63 of 88). After struggling on opening night with just eight faceoff wins on 23 tries, Leschyshyn has bounced back to to 20 for 29, 20 for 28 and 23 for 28 in his last three contests. Only three players in the WHL have taken more faceoffs than Leschyshyn (108) and his 65.7 per cent success rate for the season is number one among all centremen who have taken more than 20 faceoffs.