PREVIEW: Pats back in action at home to Portland Wednesday 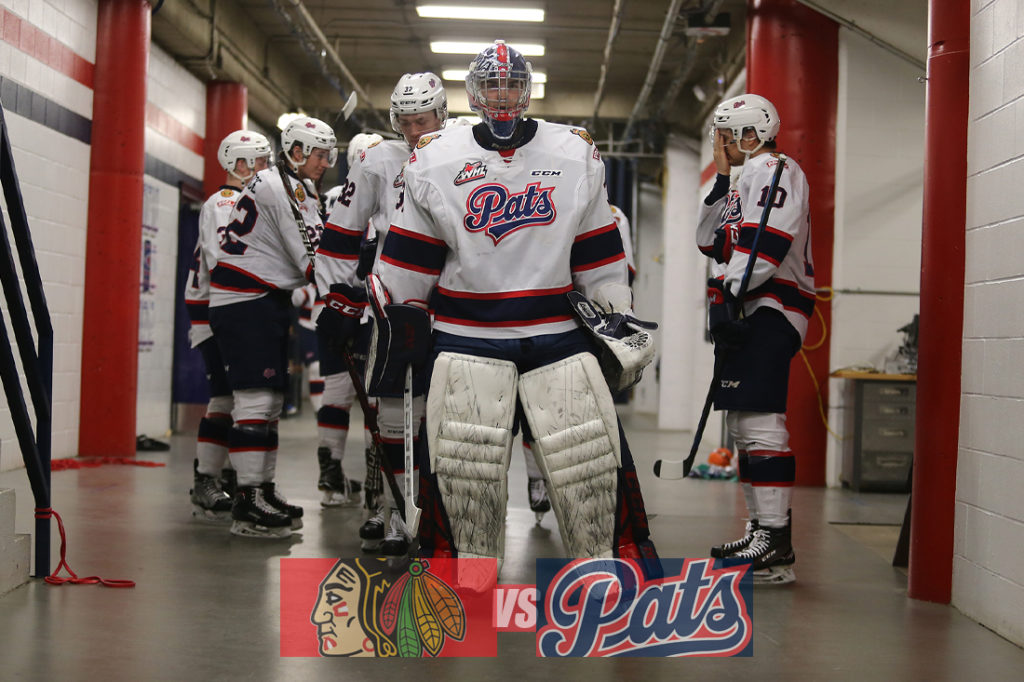 The Regina Pats (12-27-1-1) return to action on home ice on Wednesday against the Portland Winterhawks (24-11-3-2). Puck drop is at 7:00 p.m. at the Brandt Centre. The Pats were last in action at home on Sunday and wrapped up a stretch of three games in three days with a 6-3 loss to the Seattle Thunderbirds. The Winterhawks were in Brandon last night and won a fifth straight game, 4-3 over the Wheat Kings. Tonight is the first and only meeting between the Pats and Winterhawks during the 2018-19 season. Tonight’s game can be heard with Bennett Dunlop Ford Pats Hockey starting at 6:35 p.m. on 620 CKRM.

The Lead Up: Tough third sinks Pats against Thunderbirds Sunday
The Regina Pats dropped a 6-3 decision on home ice to the Seattle Thunderbirds on Sunday. After a scoreless first, the Thunderbirds opened the scoring 7:34 into the second. The Pats tied it 1-1 with a powerplay goal from Robbie Holmes, his ninth, nine minutes into the period. Seattle took the lead once more, but the Regina powerplay struck with 1:30 left in the second thanks to Sebastian Streu, his second of the season and it was a 2-2 game after 40 minutes. In the third, Seattle went up 3-2 early, the Pats got it even with yet another powerplay goal at 4:16. Riley Krane banged home a rebound for his eighth and it was 3-3. However, the Thunderbirds came back with two powerplay goals of their own and added another late to take the two points in a 6-3 final. The Pats were outshot 47-22, the powerplay was three for six and the penalty kill three for five. Riley Krane, Robbie Holmes, Kyle Walker and Sebastian Streu led the offence with two points apiece, while Dean McNabb made 41 saves.

Krane Finding His Way
Pats rookie forward Riley Krane is finding a way to contribute offensively on a regular basis over the last month. In the last 10 games, the 18-year-old has scored four goals and added three assists for seven points. Krane was drafted by the Pats in the eighth round of the 2015 WHL Bantam Draft and enters Wednesday fifth in team scoring with 14 points. His eight goals are the fourth most on the team, behind Robbie Holmes and Sergei Alkhimov who have nine and Austin Pratt who leads the club with 15 goals.

Holmes Keeps Rolling
Pats forward Robbie Holmes continued his strong offensive output with a goal and an assist against the Seattle Thunderbirds on Sunday. The 19-year-old is operating at a point per-game since returning from a lower body injury that kept him out of 17 games. The product of Sherwood Park, Alberta has scored five goals and four assists for nine points in nine games. For the season, Holmes has nine goals and 15 points in 23 games, which is second most on the team.

Two Point Night
Pats forward Sebastian Streu had his first two-point night since joining the Regina Pats midway through the season. The 19-year-old scored on the powerplay and added a powerplay assist against Seattle on Sunday. In 13 games with the Pats, Streu has scored twice and added six assists for eight points. Five of those points have come in the last seven games. Streu was signed by the Pats in November and is on pace to surpass his previous career high in points of 12 set last year with the Kootenay ICE. He is on pace to put up 25 points and has 22 shots on goal in 13 games this season.