PREVIEW: Pats back home to take on Lethbridge Friday 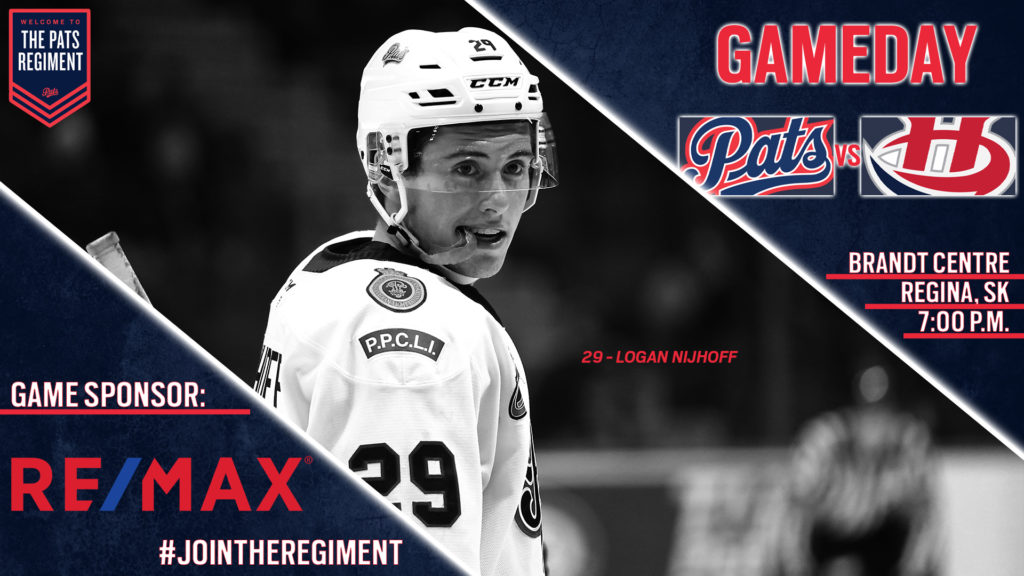 The Regina Pats (13-25-3-2) return to home ice on Friday for the first time since January 8 when they host the Lethbridge Hurricanes (27-11-2-5). Puck drop is at 7:00 p.m. at the Brandt Centre. The Pats were last in action on Saturday when they finished their U.S. Division road trip with a 6-2 loss in Spokane. The Hurricanes were in Moose Jaw on Wednesday where they beat the Warriors 7-1. Tonight is the fourth and final meeting of the season between Regina and Lethbridge, the Pats are 0-3-0-0 in the season series. The game can be heard with Bennett Dunlop Ford Pats Hockey starting at 6:35 p.m. on 620 CKRM and will be broadcast on Access 7.

Quick Facts
– The Pats are 3-7-0-0 in their last 10 meetings with Lethbridge, going 0-3-0-0 so far this season.
– The Pats are 4-1-0-2 in their last seven home games.
– Robbie Holmes and Zach Wytinck lead the Pats with seven career points against the Hurricanes.
– The Pats have re-called 16-year-old forward Easton Armstrong and defenceman Parker Berge for Friday’s game.
– Zack Smith is riding a four-game point streak, scoring three goals and an assist in that stretch.
– Zach Wytinck has one assist in three straight games and sits sixth among WHL defencemen with 35 points.
– The Pats have scored six powerplay goals in their last five games.
– Carson Denomie is tied for seventh in the league with nine powerplay goals and has 19 powerplay points this year.

Roster Moves
Dealing with a rash of injuries, the Pats made a number of roster moves this week. The club has re-called 16-year-old forward Easton Armstrong from the L.A. Jr. Kings of the T1EHL and 16-year-old defenceman Parker Berge from the Northern Alberta Extreme of the CSSHL. Armstrong has put up 17 goals and 28 points in 20 games this season. Berge has six goals and 18 points in 24 games this year. The club also re-assigned 15-year-old defenceman Layton Feist to the Okanagan Hockey Academy and 15-year-old goalie Matthew Keiper to the Winnipeg Bruins.

Career Year
Pats forward Logan Nijhoff has already set career highs in the WHL with nine goals and 22 points in 42 games this year. The 18-year-old has enjoyed a consistent offensive stretch since the beginning of the second half of the season. He has put up four goals and seven assists for 11 points in 12 games since the break and sits fifth in team scoring. He has had multi-point night’s four times this season, he had one two-point game in 2018-19 and another in 2017-18. His previous career high in goals was seven and points was 17, set last year in 59 games.

Last Pats Game
The Regina Pats concluded their U.S. Division road trip with a 6-2 loss in Spokane to the Chiefs on Saturday night. In the first, the Chiefs scored first at the 2:49 mark thanks to Erik Atchison to lead 1-0. The Pats outshot Spokane 7-3 for the rest of the period, but it remained 1-0 after the first. In the second, the Chiefs extended the lead to 2-0, 12 minutes into the period on a goal from Reed Jacobson. Less than two minutes later, Carson Denomie set up Logan Nijhoff back door on the powerplay for his ninth to cut the lead to 2-1 and that was the score after 40 minutes. In the third, the Chiefs scored three times in a span of 1:18 to open up a 5-1 lead. They added another with less than six minutes to play and it was 6-1. Zack Smith got one back for the Pats with 3:25 left, his ninth to make it 6-2 and that was the final score. The Pats were outshot 40-35, the powerplay was one for seven, the penalty kill six for seven, while Donovan Buskey and Danton Belluk combined to make 34 saves.

Last Pats Game Vs Lethbridge
November 27, 2019 – Zack Smith scored the lone goal for Regina in a 4-1 loss in Lethbridge to the Hurricanes. The Hurricanes were led by Dylan Cozens who put up three points in the win for Lethbridge. Max Paddock stopped 38 of 41 shots for Regina, Carl Tetachuk made 25 saves for the Hurricanes.