PREVIEW: Pats back at it Saturday night in Red Deer 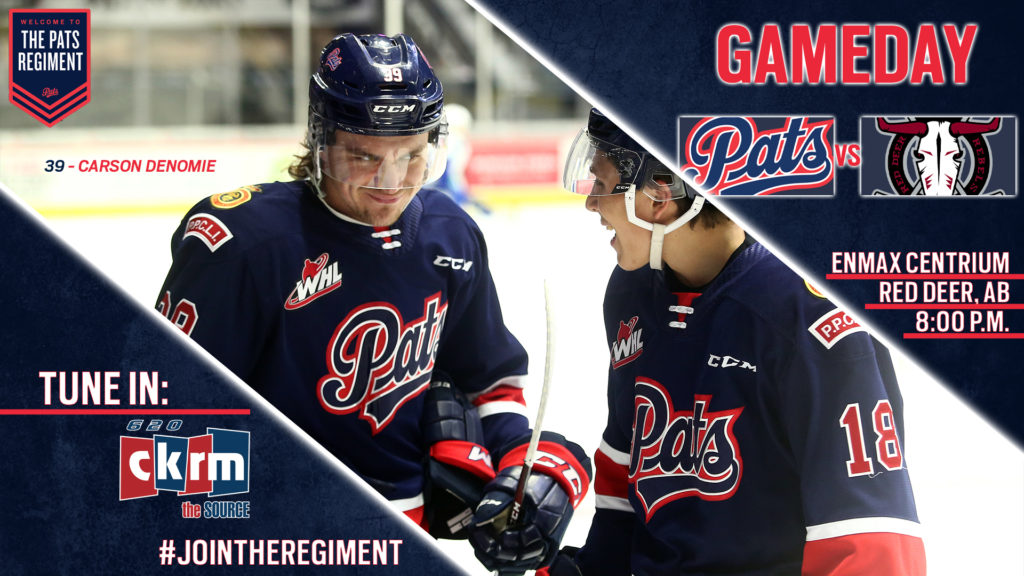 The Regina Pats (5-16-2-0) are back in action on Saturday night when they visit the Red Deer Rebels (7-14-0-3). Puck drop is at 8:00 p.m. Regina time at the Enmax Centrium. The Pats were in Calgary on Friday night and got 42 saves from Max Paddock in a 4-1 loss to the Hitmen. The Rebels were last in action on Tuesday when they lost a 6-4 decision in Swift Current against the Broncos. Tonight is the third of four meetings between Regina and Red Deer, the Pats are 1-0-1-0 in the season series. The game can be heard with Bennett Dunlop Ford Pats Hockey starting at 7:35 p.m. on 620 CKRM.

Quick Facts
– The Pats will meet the Rebels for the third time this season, the Pats won the first meeting in Red Deer in a shootout, lost at home in overtime in the second meeting.
– The Pats are 4-6-2-0 in their last 12 games.
– The Pats and Rebels have played an overtime or shootout game in five of the last six meetings in Red Deer.
– Max Paddock has made 105 saves in his last three starts, 80 of them coming in the last two games.
– Austin Pratt has two final minute tying goals against Red Deer this season.
– Pratt scored his team leading 10th goal and 20th point of the season on Friday night in Calgary.
-Zach Wytinck picked up his team leading 14th assist on Friday in Calgary.
– The Regina powerplay is seven for 18 in their last four games.

Paddock Rolling
Despite two losses to start his Central Division road trip, goaltender Max Paddock has put up 80 saves between Wednesday night in Lethbridge and Friday in Calgary. Against the Hurricanes, Paddock stopped 38 of 41 in the Pats 4-1 loss and then added 42 saves on Friday against the Hitmen in another 4-1 defeat. The 19-year-old stopped 25 of 25 for his third career shutout in his previous start in Swift Current and is 1-2-0-0 in his last three with a .933 save percentage.

Powerplay Success
The Pats powerplay has found its stride over the last four games, picking up seven goals on 18 opportunities for a 38.8 per cent success rate in that stretch. Conversely, the Pats went eight for 82 in their first 19 games for a 9.7 per cent efficiency. Austin Pratt, Robbie Holmes and Ty Kolle lead the team with three powerplay goals on the year, Carson Denomie has five powerplay markers, four with Moose Jaw and one as a member of the Pats. The Regina powerplay enters Saturday night ranked 19th in the WHL at 15 per cent, going 15 for 100 in their first 23 games of the season.

Last Pats Game
The Regina Pats got 42 saves from Max Paddock in a 4-1 road loss in Calgary on Friday night. In the first, the Pats weathered an early storm, outshot 7-0 in the opening minutes, but Max Paddock stopped them all. Regina battled back and outshot the Hitmen 10-6 the rest of the way and got the game’s first goal on the powerplay. Austin Pratt tipped in a Carson Denomie shot for his 10th and Regina led 1-0 after one. In the second, the Hitmen outshot the Pats 20-8 and got a shorthanded goal from Hunter Campbell and an even strength marker from Riley Stotts to lead 2-1 after 40 minutes. In the third, Calgary extended their lead to 3-1, just over three minutes in on a goal from Jonas Peterek. The Hitmen added another on a five on three powerplay to lead 4-1 and that was the final. The Pats were outshot 46-25, the powerplay went one for three, the penalty kill two for three, while Max Paddock was sensational, making 42 saves.

Last Pats Game Vs Calgary
November 3, 2019 – The Red Deer Rebels picked up a 3-2 overtime win at the Brandt Centre thanks to an Arshdeep Bains game winner. The Pats got a second period goal from Zack Smith but trailed 2-1 until Austin Pratt scored in the final minute to force overtime. Max Paddock made 24 saves for Regina, Byron Fancy 25 for the Rebels.