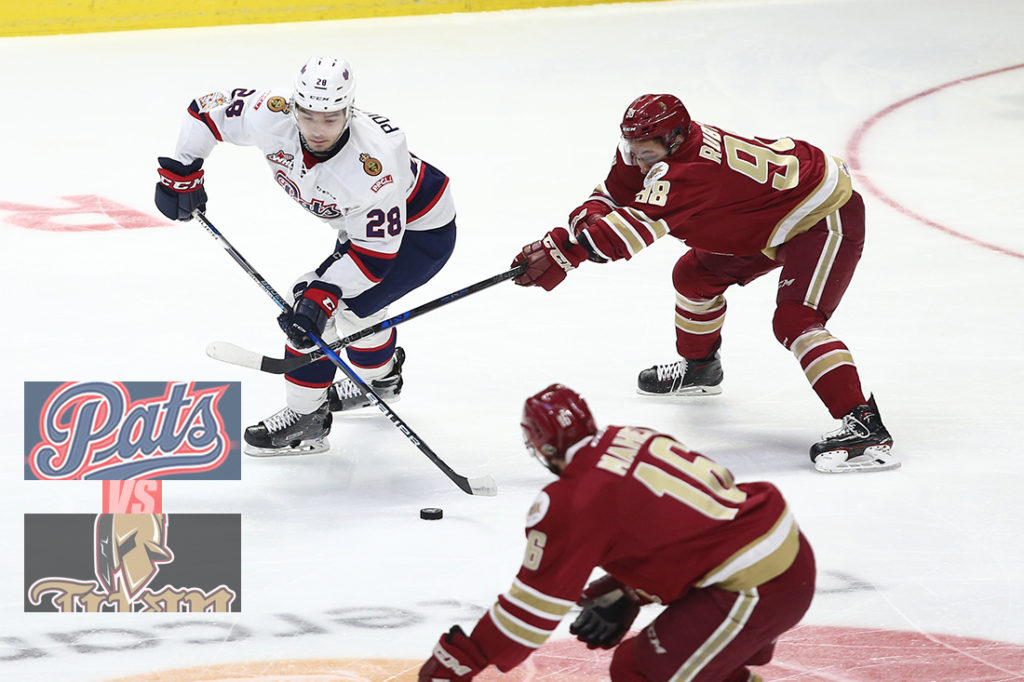 The Regina Pats (3-1) will play in the 2018 Mastercard Memorial Cup Final tonight against the QMJHL Champion Acadie-Bathurst Titan (2-1). Puck drop is at 5 p.m. at the Brandt Centre. The Pats are coming off a 4-2 win in the semi-final on Friday over the Hamilton Bulldogs. The Titan have been off since Tuesday when they wrapped up the round robin with a 3-2 loss to the Bulldogs. The game can be heard starting at 4:05 with the Safeway Sobeys pre-game show followed by Bennett Dunlop Ford Pats Hockey on 104.9 The Wolf. The game will also be broadcast on Sportsnet.

The Lead Up: Pats down Bulldogs to advance to Memorial Cup Final
The Regina Pats have advanced to the Championship Final at the 2018 Mastercard Memorial Cup thanks to a 4-2 win over the OHL Champion Hamilton Bulldogs on Friday night. Regina opened the scoring in the first when Austin Pratt banged home a rebound for his first at 5:22 and it was 1-0 after one. The Bulldogs tied it at the 7:35 of the second period but Regina reinstated the lead when Cameron Hebig ripped one from the slot for his fourth and it was 2-1 after 40 minutes. In the third, Sam Steel gave the Pats some insurance with his second at the 14:05 mark, but 1:13 later Will Bitten drew Hamilton to within a goal at 3-2. The Pats held on and Jake Leschyshyn scored an empty netter with five seconds left to win 4-2. Sam Steel led the offence with a goal and an assist while Max Paddock made 44 saves.

Head to Head
The Pats and Titan met last Sunday in both teams second game of the round robin at the Memorial Cup. Acadie-Bathurst took a 7-2 lead early in the third, only to see the Pats climb to within a goal at 7-6. The Titan would ice it with an empty netter with less than a second left in an 8-6 final. Regina has scored 19 goals through four games in the tournament and given up 17, the Titan meanwhile have scored 14 times in three games and given up 12 goals. The Pats powerplay has gone five for 15 (33.3%) while Acadie-Bathurst is one for 10 (10%). Pats captain Sam Steel leads the tournament in scoring with 13 points while Titan captain Jefferey Viel is second with nine points. Regina’s Josh Mahura and Acadie-Bathurst’s Noah Dobson are tied for the tournament lead in defence scoring with seven points each.

What A Time for a First
Pats forward Austin Pratt saved his first goal in a Pats uniform for the 2018 Mastercard Memorial Cup semi-final. The 18-year-old from Lakeville, Minnesota gave the Pats a 1-0 lead in the first period on Friday when he deposited a rebound into the back of the net. Pratt was acquired by the Pats just after the Christmas break from the Red Deer Rebels and had four assists in the second half of the season. Pratt scored 16 goals and had 34 points last year as a 17-year-old with Red Deer.

On A Tear
Pats forward Cameron Hebig is on a goal scoring tear at the Memorial Cup. The overager was kept off the score sheet in the club’s opening game of the tournament but has goals in three straight games since. The Edmonton Oilers prospect scored twice and had an assist against Acadie-Bathurst on Sunday, a goal and an assist against Swift Current Wednesday and followed that up with a goal against Hamilton on Friday. Hebig’s four goals is second in the tournament, behind teammate Nick Henry who has five, and his six points is tied for sixth.