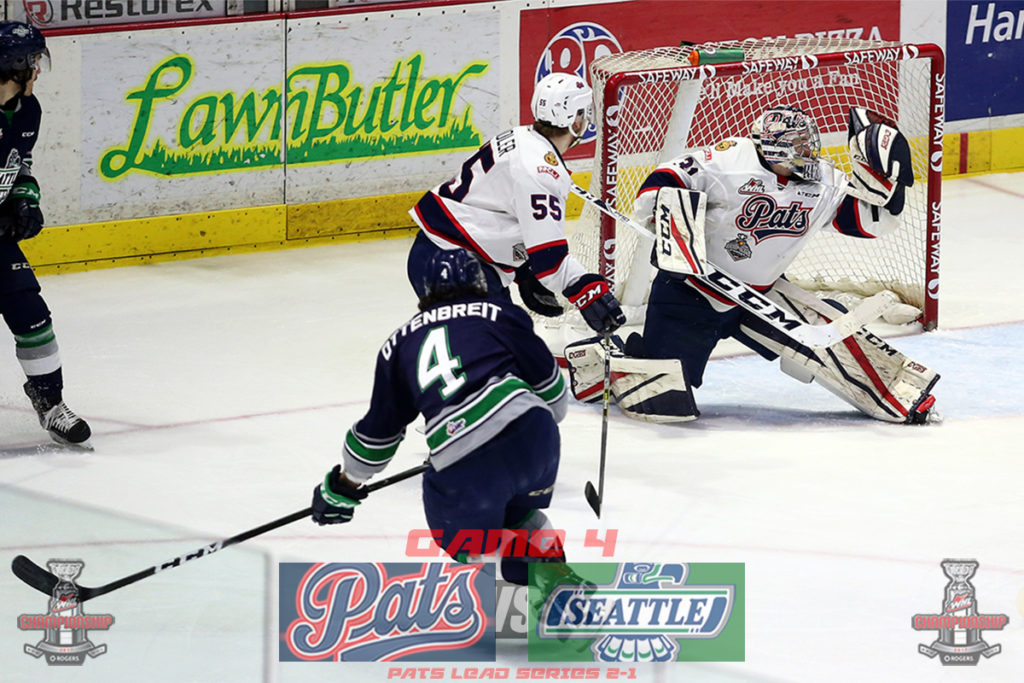 The Regina Pats (14-6) are on the road tonight for game four of the WHL Championship Series, presented by Rogers, in Seattle against the Thunderbirds (13-4). Puck drop at the ShoWare Center is 8 p.m. Regina time. The Pats picked up a 3-2 win in game three on Tuesday night to take a 2-1 lead in the best-of-seven series. The game can be heard on 620 CKRM with Bennett Dunlop Ford Pats Hockey beginning at 7:35 p.m. It will also be broadcast on the WHL on Shaw and Access 7.

Lead Up: Tyler Brown Leads Pats to Game Three Victory
Tyler Brown made 36 saves to lead the Pats to a 3-2 victory in game three of the WHL Championship over the Seattle Thunderbirds. With the win, the Pats take a 2-1 series lead. Regina got on the board first on the powerplay when Connor Hobbs hammered a slap shot from the blue line for his sixth. The Seattle powerplay tied it up four minutes later but the Pats took the lead back on another powerplay. Chase Harrison scored his first career playoff goal from the blueline to make it 2-1. Seattle bounced back again, two minutes later and it was 2-2 after one. In the second, Robbie Holmes buried his third of the playoffs into the top corner, five minutes in to give Regina the 3-2 lead. The Pats held on from there, including 1:27 down six on four to end the third, to take game three and a 2-1 series lead. The Thunderbirds outshot the Pats 38-28 in the defeat, Tyler Brown made 36 saves for the Pats, Carl Stankowski 25 for Seattle.

Series At A Glance
The Pats and Thunderbirds split the first two games of the WHL Championship Series at the Brandt Centre and then Regina won game three on Tuesday night to lead 2-1. The Pats have scored eight goals while the Thunderbirds have seven through the first three games. The Pats have been outshot by the Thunderbirds 94-86. The Regina powerplay has gone five for 14 and the penalty kill eight for 11. Sam Steel leads the Pats with a goal and three assists through three games. Josh Mahura and Dawson Leedahl each have three points while Connor Hobbs and Filip Ahl have two. Tyler Brown is 2-1 with a 2.26 GAA and a .925 SV%. Seattle is led by Mathew Barzal and Ethan Bear who have four points each while Alexander True has three. Carl Stankowski is 1-2 with a 2.61 GAA and a .907 SV%.

Brown Shines Tuesday
A day after being named the WHL Goaltender of the Week, Pats goaltender Tyler Brown made 36 saves to lead the Pats to a game three win over Seattle on Tuesday. The Thunderbirds scored twice in the first 14:42 of the first period but Brown shut the door from there, including 19 saves in the third period to pick up his 14th win of the post-season. Brown enters Wednesday night with a 14-6 record, the second best goals against average in the playoffs at 2.15 and the third best save percentage at .925.

Powerplay Rolling
The Pats powerplay has scored five goals on 14 opportunities through the first three games of the WHL Championship. Regina scored one powerplay goal in game one, two in game two and twice more in game three. For the series, the Pats are operating at 35.7%. For the playoffs, Regina is 20 for 73, 27.4%, in 20 games.