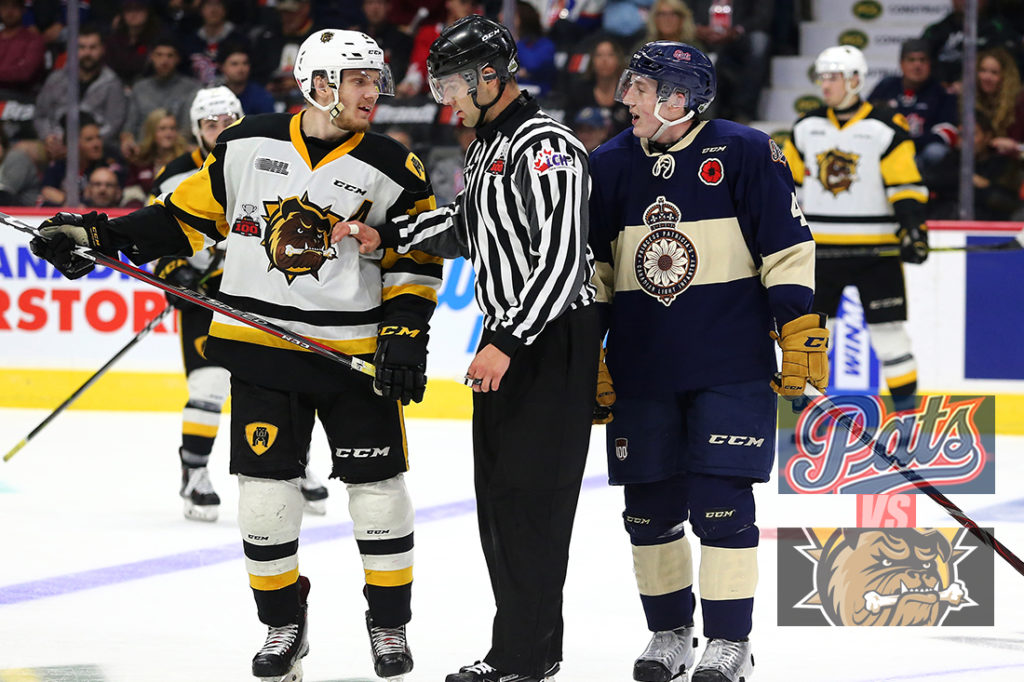 The Regina Pats (2-1) will play in the 2018 Mastercard Memorial Cup semi-final tonight against the OHL Champion Hamilton Bulldgos (2-1). Puck drop is at 8 p.m. at the Brandt Centre. The Pats are coming off a 6-5 win over the Swift Current Broncos on Wednesday to advance to tonight’s game. The Bulldogs have been off since Tuesday when they beat the Acadie-Bathurst Titan 3-2. The game can be heard starting at 7:05 with the Safeway Sobeys pre-game show followed by Bennett Dunlop Ford Pats Hockey on 620 CKRM. The game will also be broadcast on Sportsnet.

The Lead Up: Pats hold of Broncos to close our round robin Wednesday
The Regina Pats outlasted the Swift Current Broncos 6-5 on Wednesday night to advance to the semi-final at the Mastercard Memorial Cup. Regina opened the scoring with a powerplay goal from Nick Henry in the first, his third of the tournament and it was 1-0 after one. In the second, Cameron Hebig extended the lead to 2-0 with his third, but Swift Current responded thanks to Glenn Gawdin to cut the lead in half. The Pats restored the two goal lead with a shorthanded goal from Nick Henry, his second of the night to make it 3-1. Swift Current got it back on the same powerplay, however Nick Henry would complete his hattrick late in the period and it was 4-2 Regina heading to the third. The Pats got it to a 5-2 lead when Bryce Platt finished off a nice move in front for his first before the Broncos scored two straight to get within a goal. Libor Hajek made it 6-4 Regina with his first, a powerplay goal with 1:37 remaining but again the Broncos came back with a powerplay goal to close the gap to 6-5. The Pats held on from there and advance to Friday’s semi-final against the Hamilton Bulldogs.

Record Night
Pats captain Sam Steel tied a Mastercard Memorial Cup record on Wednesday with five assists in one game. Only two other players have accomplished that feat at the Memorial Cup, Dan Hodgson did it in 1985 with the Prince Albert Raiders, as did Jonathan Drouin with the Halifax Mooseheads in 2013 in Saskatoon. Steel enters the semi-final leading the tournament in scoring with 11 points in three games, two ahead of Jefferey Viel of the Acadie-Bathurst Titan. His 10 assists are three off the tournament record of 13, set by Hodgson in 1958. The record for points in a tournament is 16, set by Jeff Larmer of the Kitchener Rangers in 1982 and Guy Rouleau of the Hull Olympiques in 1986.

Henry Rolling
Pats forward Nick Henry has found his scoring touch in the 2018 Mastercard Memorial Cup. The fourth round pick of the Colorado Avalanche started the tournament with the game winning goal against Hamilton last Friday. Then scored in Regina’s loss to Acadie-Bathurst before adding a hattrick against Swift Current on Wednesday. The product of Portage la Prairie, MB leads the tournament with five goals in three games and his seven points are tied for third overall.