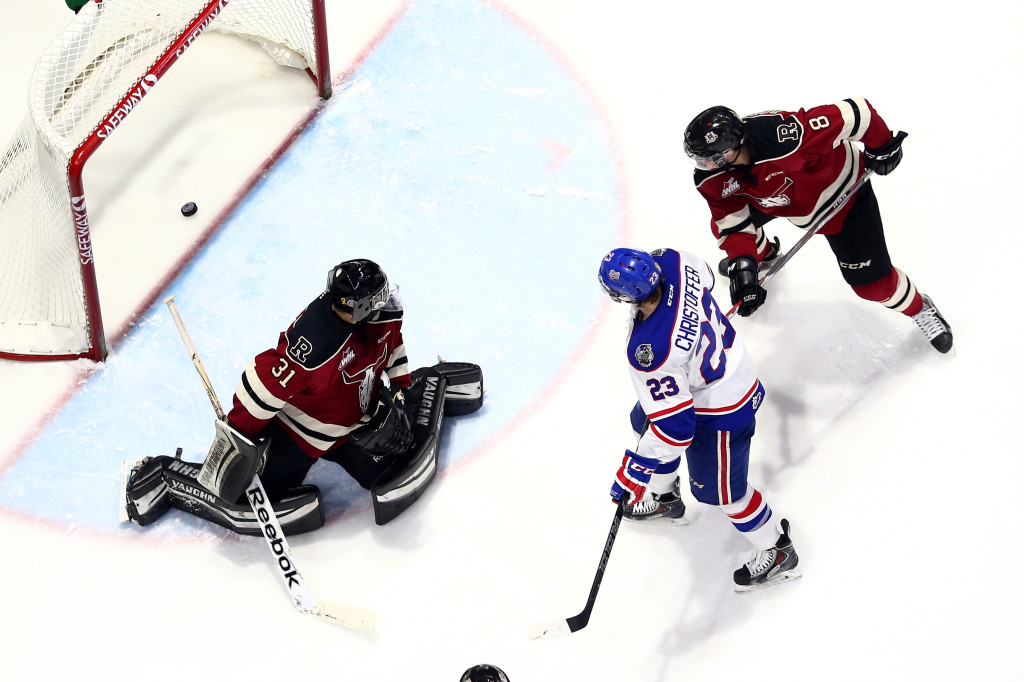 The Rebels survived an early penalty kill with the help of their starting goaltender, Rylan Toth. Neither team really sustained any pressure throughout the initial fifteen minutes of the opening stanza. The Pats had an opportunity to strike first when Josh Mahura sat for tripping. Just as Mahura’s minor expired, Adam Brooks let a shot go from the top of the offensive zone circle. His shot hit the back boards and deflected right onto the tape of Jesse Gabrielle. The forward pulled the trigger and put the Pats on the board. Gabrielle’s 19th of the year was the lone goal in the frame as the Blue and White went into the first intermission with the lead on the scoreboard, and with the upper hand on the shot clock, 15-7.

In the second, the Pats added some insurance when Braden Christoffer tipped in Colby Williams’ point shot on the powerplay to go ahead, 2-0. The Blue and White continued to capitalize on the man advantage when Adam Brooks added his second goal in as many games to make it a 3-0 cushion over the Rebels. At the television timeout, the Pats were two-for-six on the powerplay, while the visitors were oh-for-one. Once play resumed, the Queen City Kids continued to inflict damage while five-on-four. With Jeff de Wit in the sin bin, Connor Hobbs spotted Williams far-side and the veteran defenseman wired the biscuit top shelf to make it 4-0. The Pats held on to their four goal lead heading into the third period. At the end of 40 minutes, the shots were 28-13 in favour of the home team.

Two seconds after Rykr Cole stepped out of the box for a hooking minor at the buzzer in the second, Haydn Fleury broke Tyler Brown’s shutout bid. Nearing the final five minutes of the contest, Gabrielle and the Rebels’ Wyatt Johnson were ejected for off-setting 10-minute misconducts. The rough stuff escalated minutes later with Brooks and Fleury getting the gate for jousting after Austin Wagner was called for boarding. The Rebels’ powerplay was negated, though, when Nelson Nogier sat two for slashing. Nogier returned to the ice with his team still trailing by three. The Blue and White ultimately closed out the game on the man advantage, cruising to a 4-1 win over the squad from Red Deer.

The Pats travel to Saskatoon and face the Blades on Monday, February 23rd in an 11:30 a.m. puck drop. Tune in with Home Depot Pats Hockey on 620 CKRM or WHL Live Web TV.