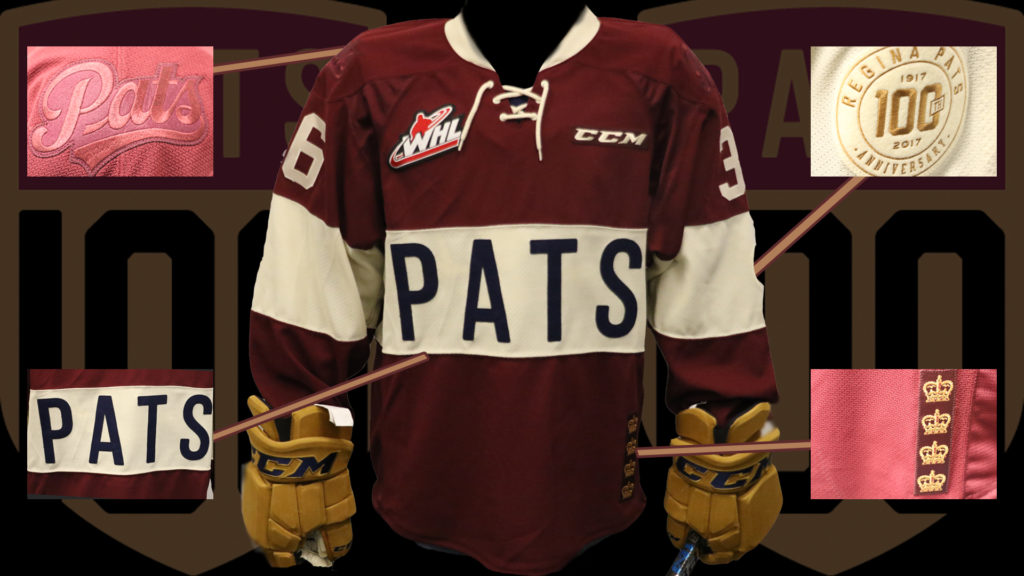 The Regina Pats Hockey Club unveiled their 100th Anniversary Season jerseys at their home opener on Saturday night at the Brandt Centre.

The special edition commemorative jersey design for the Regina Pats 100th anniversary season is a tribute to the proud history of Canada’s oldest junior hockey franchise. The simple, classic styling, with its prominent colour band across the chest and arms, emblazoned with authentic Pats lettering, pays respect to the original uniform, first worn a century ago.

“The Pats would like to thank the design team at the Brandt Group of Companies for making this all possible,” said Pats COO Stacey Cattell. “The entire organization is excited to showcase the jersey on numerous 100th Anniversary themed nights throughout the 2017-18 season.”

The traditional colour palette also harkens back to a century ago, when a hockey sweater really WAS a sweater. The four embroidered crowns, mirroring the crown on the Regina city flag, signify the four Memorial Cup titles won by the team in its century of existence and the new centennial season crest on the left shoulder brings the jersey design full-circle, demonstrating that Regina Pats pride is alive and still growing stronger in 2017.

“We are honoured to have been entrusted with the privilege of recognizing Canada’s oldest hockey brand in its centennial year,” says Brandt Group of Companies Design Director, Chris Kroeker. “We look forward to seeing these 100th anniversary uniforms out there all season long, as the Pats make their way to the Memorial Cup!”