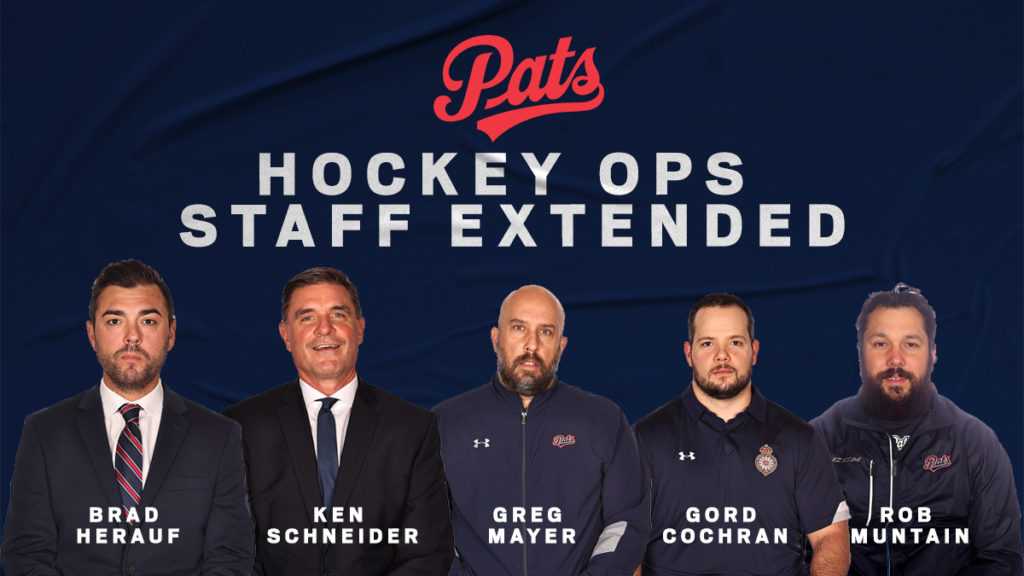 Herauf, who hails from Regina, Sask. returns for his eighth season with the Pats, as he joined the organization prior to the 2015-2016 season after previously being the Head Coach of the Regina Pat Canadians from 2012-2015. He also served as an assistant coach for Canada White at Hockey Canada’s U17 tournament in Ottawa, Ont. this past fall. Prior to coaching, Herauf played four seasons in the Saskatchewan Junior Hockey League with the Estevan Bruins and Battlefords North Stars before embarking on an eight year professional hockey career split between the CHL, ECHL and AHL.

Schneider, begins his second season with the Pats after joining the team prior to last season. The former Brandon Wheat Kings U18 AAA Head Coach from Colfax, Sask. had been a scout for the Pats for three years, and as a player, he spent three seasons with the Weyburn Red Wings of the SJHL, before suiting up for two seasons with the Brandon Wheat Kings of the Western Hockey League, where he was their captain in 1981-1982 before returning to the Red Wings to finish his career.

Muntain, returns for his 12th season with the Pats, as he was hired prior to the 2011-2012 season. Originally from Esterhazy, Sask. Muntain was a goaltender for the University of Regina from 2001-2005 after his junior career was split between the Brandon Wheat Kings, Kindersley Klippers and Melville Millionaires from 1996-2000.

Mayer, continues to be the longest serving member of the Regina Pats Hockey Operations department, as he returns for his 19th season with the Pats and his 26th in the Western Hockey League after he spent seven previous seasons with the Moose Jaw Warriors. From Kelowna, B.C. Mayer served as a trainer with Team Canada’s U18 (2000) and World Juniors (2001, 2010) teams and has assisted the Saskatchewan Roughriders during their Training Camp in the past. He has participated in over 1,500 WHL regular season games throughout his time with both the Warriors and Pats.

Cochran, joined the Pats prior to the 2014-2015 season, and returns for his ninth season with the Pats. The Williams Lake, B.C. product has more than a decade of junior hockey experience, starting his career with the Williams Lake Timberwolves in 2006 before moving onto the Vernon Vipers in 2008, and later winning a RBC Cup in 2010. He has also worked with Hockey Canada at U17 and U18 levels.

You can catch these five individuals as well as Regina Pats prospects at our 2022 Spring Camp from June 10-12 at the Co-Operators Centre, with on-ice sessions taking place from 11:00 a.m. to 12:30 p.m., on Saturday and Sunday. For more information, CLICK HERE.