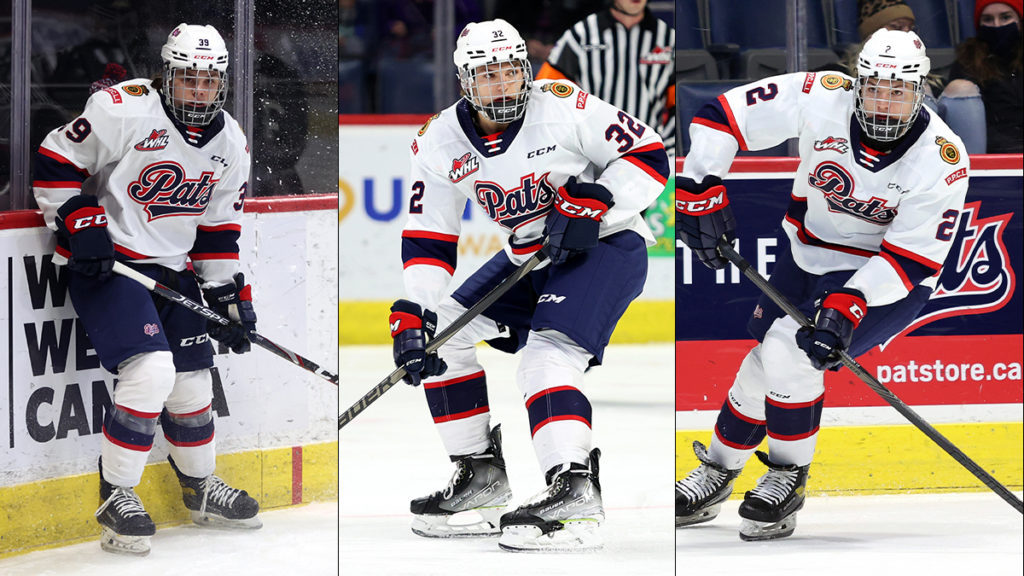 Today, we continue by highlighting the three signed prospects from the 2021 Draft.

Vaughan, 16, was drafted by the Pats in the second round, 30th overall, in the 2021 WHL Prospects Draft this past December. The Merritt, B.C. native played at Rink Hockey Academy in Kelowna this past season, scoring seven goals and adding 11 assists for 18 points in 31 regular season games, before adding three points in three playoff games. The 6-foot, 195 lb. defenceman signed with the Pats on December 27, 2021 and made his debut that night against the Edmonton Oil Kings at home, recording his first WHL point Dec. 29 vs. Winnipeg.

“Playing heavy will have to be apart of his game and the good thing is that it comes natural for him and his brother. That’s just what they do. It’s who they are and how they play the game. We’re excited to add that kind of size and game to our team. Especially when they’re older, it becomes a leadership form. He’s got a good future.” – General Manager and Head Coach John Paddock

Vaughan, 16, is the twin brother of Corbin, and was selected by the Pats in the first round, 21st overall, in the 2021 WHL Prospects Draft. The Merritt, B.C. native made his WHL debut on December 27, 2021 against the Edmonton Oil Kings after signing that same day, and went onto play six games with the Pats as a call up. The 6-foot, 185 lb. forward tallied 19 goals and 18 assists for 37 points in 32 games at the RHA in Kelowna this season.

“They both play the game the same way and think the game the same way as far as approach. I like the fact that they both add at least average hockey sense or better. They have a big future, as they’ll be able to bring different things to the table. They’re going to practice and work at their game. We know they’re here and we know they’re going to provide elements so that when they’re 18 and 19, they’ll be dominant players.” – General Manager and Head Coach John Paddock

Zacharias, 16, was drafted by the Pats in the fourth round of the 2021 WHL Prospects draft, and signed with the Pats on February 25, 2022. The Saskatoon, Sask. native played for the Saskatoon Blazers this season, scoring 14 goals and adding 38 assists for 52 points in 41 games, finishing fourth in the Saskatchewan Midget AAA league in assists and 10th in points. The 5-foot-9, 185 lb. forward played four games with the Pats as a call up, recording one assist.

“He’s a very smart player that is good in all three zones. He’s very good positionally and knows how to create offence. He’s creative and he’s got skill to go with it. He’s a type of player who can compliment some good players and get them the puck or do the work in the corners to get the puck.” – Regina Pats Travelling Scout Dale Derkatch