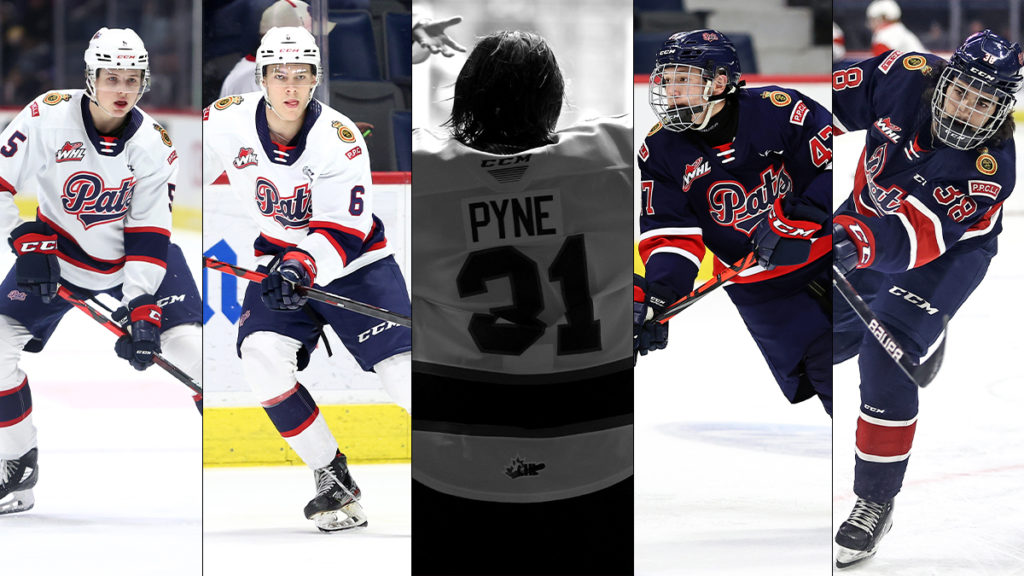 Pyne, 16, was listed by the Pats in 2020 and signed with the club on September 14, 2021 after an impressive training camp. That earned the White City, Sask. native an opportunity to practice with the Pats this season. Pyne was called up for his first WHL start on February 8, 2022 against the Edmonton Oil Kings at Rogers Place. The 6-foot, 147 lb. goaltender would go onto record two shutouts in his first three WHL starts, finishing the season with a 5-2-1 record, a 3.32 goals-against average and .893 save-percentage over nine appearances. Pyne also produced a strong campaign on his first season with the Regina Pat Canadians, going 16-8-0, finishing second in the Saskatchewan Midget AAA Hockey League with a 2.22 G.A.A. and finishing third in SV% at .906.

“He’s a very good prospect on the fringe of playing in the WHL. It’s a small sample size. He has good size, he seems to be square to the shooter. We’re excited about him. I think we have to be a little bit guarded as the [Regina Pat Canadians] lost out in the [second] round. He’s a young player and young players get you excited.” — General Manager and Head Coach John Paddock

Dewitt, 18, is a 6-foot-4, 190 lb. defenceman who played his first full season of junior hockey with the Merritt Centennials of the British Columbia Junior Hockey League, scoring two goals, eight assists and 10 points over 43 contests. The Sicamous, B.C., native was a ninth-round pick by the Pats back in 2019, and played seven games in the Hub last season before being called up for three games this season.

“He has the size and we’re looking to have a good mixture of that on the blueline. He’s a big guy who needs to get his footspeed going. He needs to get a little bit of crankiness to his game. It’s going to be a big training camp for him and it’s going to be a big summer for him to improve. If he does, he gives us something we’d like to have.” — General Manager and Head Coach John Paddock

Herman, 17, played for his hometown Swift Current Legionnaires this season, scoring eight goals, 12 assists for 20 points in 37 games. The Swift Current, Sask. native was drafted by the Pats in the fourth round in 2020 and signed on September 9, 2021 following a solid camp with the Pats. The 6-foot-3, 176 lb. defenceman was called up by the Pats for the final two weeks of the season, making his WHL debut on March 8 in Swift Current against the Broncos.

“He’s a good skating defenceman. He can either pass the puck up the ice or skate the puck up the ice. I think he has some nice offence to him. He likes to join the rush. I think he’s smart and can move the puck well. He defends well, as he’s good with his stick and positionally. He should be good moving forward.” — Regina Pats Travelling Scout Dale Derkatch

McEachern, 16, was listed by the Pats in 2020, and signed with Regina on September 10, 2021. The Saskatoon, Sask. native played with the Saskatoon Blazers U18 AAA squad this season, producing one goal, 23 assists for 24 points in 42 games. The 5-foot-9, 145 lb. defenceman practiced with the Pats at different points throughout the season.

“He’s a smart player who moves the puck well. He’s got good agility and mobility, so the size shouldn’t be a problem, as I think he can move away from forecheckers. I think he might be a guy who can be used on the power play a little bit. I’m not sure if he can be a quarterback, but he can be on the flanks. He’s got a decent shot, and is smart and knows where to be.” — Regina Pats Travelling Scout Dale Derkatch

Barnett, 17, completed his third straight season with the Regina Pat Canadians, scoring seven goals, 12 assists for 19 points in 29 games. The Martensville, Sask. native was drafted by the Pats in the ninth round back in the 2019 WHL Prospects Draft. The 6-foot-3, 201 lb. forward was called up for nine games with the Pats this season, scoring his first WHL goal on December 27, 2021 against the Edmonton Oil Kings at home.

“He’s a different dimension of a player. We think he has a chance to play somewhere in the bottom six. Add some grit, hardness and size to our team. We like his hockey sense, his ability and his reads to learn or to adapt. He’s someone we think brings a different dimension to our team and fill a role. It will be up to him to do that in September.” — General Manager and Head Coach John Paddock