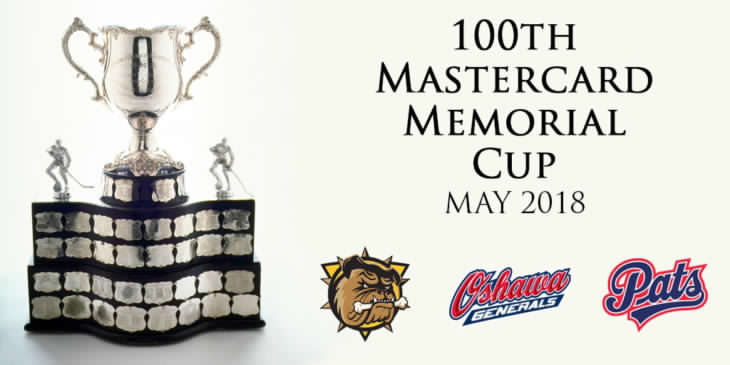 Toronto, ON – The Canadian Hockey League today announced that three clubs will have the opportunity to make formal bid presentations to host the 2018 Mastercard Memorial Cup which will be the 100th edition of the league’s prestigious national championship.

The Ontario Hockey League’s Hamilton Bulldogs, Oshawa Generals, and the Western Hockey League’s Regina Pats have advanced to the next stage of the national bid process representing the final three teams submitted by the CHL’s regional leagues for consideration to host the historic celebration.  The event, which takes place May 17-27, 2018, will feature a host CHL team along with the champions of the OHL, WHL, and QMJHL competing in the traditional round-robin tournament format.

“The Canadian Hockey League’s mission for the historic 100th presentation of the Memorial Cup is to capture, preserve, and enhance the legacy of one of the most prestigious trophies in all of sport,” said CHL President David Branch. “Our successful host will help engage the entire nation through this celebration that will also honour the brave men and women who served and continue to serve our country.”

National bid presentations will be heard by a National Site Selection Committee.  Details regarding this stage of the process including presentation schedule and committee members will be announced at a later date.  The CHL will announce the 2018 Host City in February, 2017.

“We are very proud of our longstanding partnership with the Canadian Hockey League and our association with this prestigious annual event,” said Milos Vranesevic, Head of Marketing, Mastercard Canada. “We look forward to the centennial celebration in 2018 and wish the Hamilton Bulldogs, Oshawa Generals, and Regina Pats the best of luck with their bids.”

The Memorial Cup has a rich tradition that has shaped the way junior hockey is played in North America. The trophy was originally known as the OHA Memorial Cup and was donated by the Ontario Hockey Association in March, 1919, in remembrance of the many soldiers who paid the supreme sacrifice for Canada in the First World War.  In 2010 the Memorial Cup was rededicated to the memory of all fallen Canadian Military Personnel killed in combat serving our country.

The 99th edition of the Mastercard Memorial Cup will be hosted by the Windsor Spitfires May 18-28, 2017.