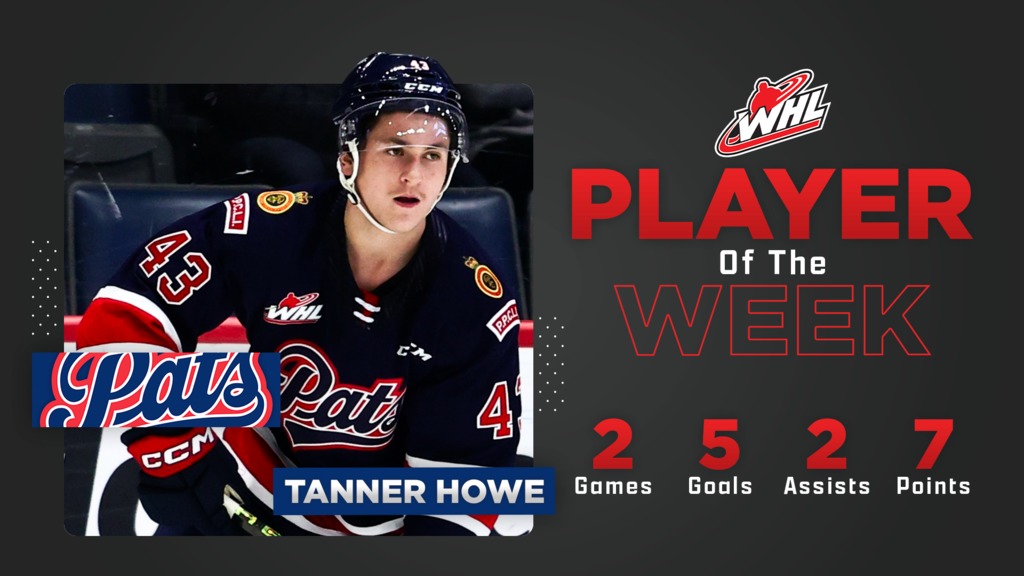 Howe, who turns 17 years of age today, recorded seven points (5G-2A) over his two appearances this past week, helping the Pats open a B.C. Division road trip with back-to-back victories.

The product of Prince Albert, Sask., started his week with a goal Friday, November 25 as Regina shut out the Vancouver Giants 3-0.

The following evening, Howe became the first 16-year-old WHL skater to record six points in a single game since Cole Sillinger in 2019, scoring four times and adding a pair of assists as the Pats upended the Victoria Royals 9-5.

Howe begins the week in ninth place among WHL skaters with 33 points (15G-18A), his totals are the most in the WHL among players not eligible for the NHL Draft until 2024.

Originally selected by Regina in the fourth round of the 2020 WHL Prospects Draft, Howe has amassed 104 points (43G-61A) over 95 regular season games.

Tanner Howe and the Regina Pats are next in action Tuesday, November 29, when they continue a B.C. Division road swing versus the Kelowna Rockets (7:05 p.m. PT, Prospera Place).

About the Western Hockey League
Regarded as the world’s finest development league for junior hockey players, the Western Hockey League (WHL) head office is based in Calgary, Alberta. The WHL consists of 22 member Clubs with 17 located in Western Canada and five in the U.S. Pacific Northwest. A member of the Canadian Hockey League, the WHL has been a leading supplier of talent for the National Hockey League for over 50 years. The WHL is also the leading provider of hockey scholarships with over 375 graduates each year receiving WHL Scholarships to pursue a post-secondary education of their choice. Each season, WHL players also form the nucleus of Canada’s National Junior Hockey Team.