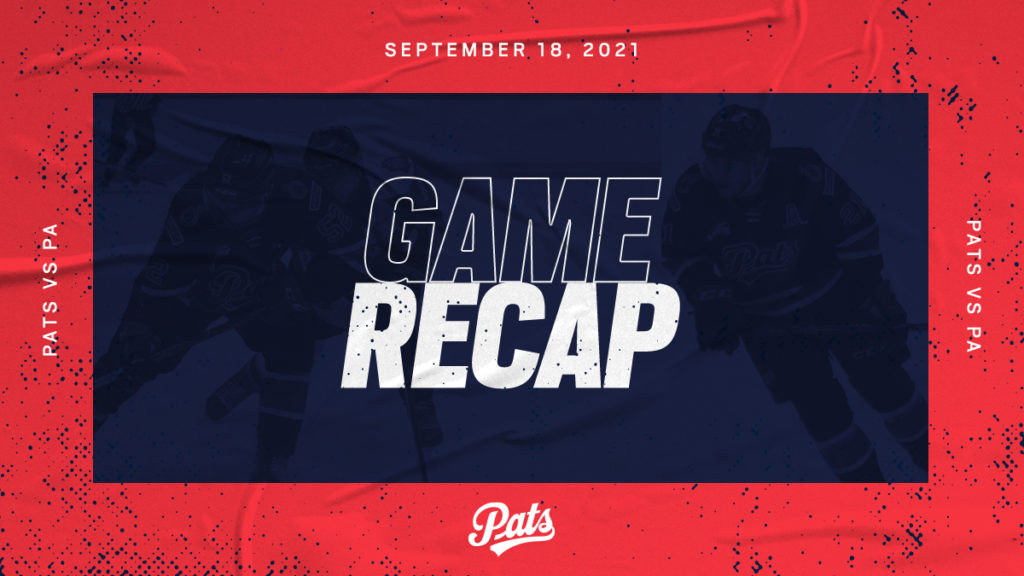 The Pats got the better chances early in this one, out-shooting the Raiders 7-2 in the first half of the opening period. Carrier had a couple good chances early on, as did Connor Bedard, but it was 0-0 at the first period media timeout.

The Raiders then pushed back, getting some good chances of their own, but Matthew Kieper stood tall in goal for Regina, keeping things scoreless.

With 5:55 to go in the first period, Chorney got the Pats on the board with his first of the pre-season.

In the second period, Carrier scored his first of three shorthanded breakaway goals with a nifty move to the backhand, doubling the Pats lead to 2-0.

Dubinsky restored Regina’s two-goal lead with just 41 seconds to go in the frame, ripping a shot to make it 3-1 before the break.

Carrier put home his second shorthanded goal of the game three minutes into the third period to push the Pats lead to 4-1.

Although Prince Albert got to within a pair of goals six minutes into the third, the game never seemed in doubt, and Dubinsky and Carrier each scored yet again to make it a 6-2 final.

Matthew Kieper finished the night with 27 saves on 29 shots for his second win of the pre-season, while Bedard finished with a pair of assists and nine shots on goal.

Regina finished the night 2-for-6 on the power play and 3-for-4 on the penalty kill.

“Tonight our guys pushed back and that gave us a good opportunity; we got good goaltending and our special teams were good…Our guys were committed to doing some things that we didn’t do last night and we got some luck from it…When we play Prince Albert, they play hard. They play the way hockey should be played and you can evaluate your personnel very easily and it was good to see our guys step up.” – HC Dave Struch

“Indescribable. Just ecstatic and hard to describe. Walking into the room after and it’s pitch quiet for a second and all of a sudden everybody just erupting. It’s an incredible feeling.” – Fwd Cole Carrier on his hat-trick

The Pats have just two more pre-season contests, both against the Moose Jaw Warriors.