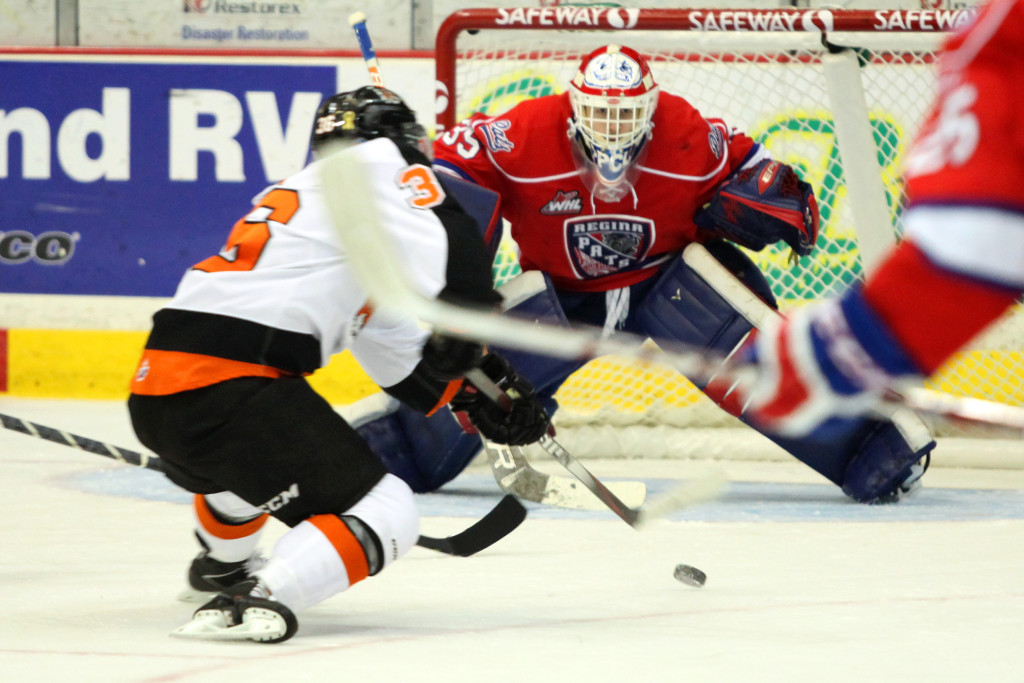 After their first meeting featured a combined 76 shots, the offence took a while to get going between the Pats and Tigers.  Medicine Hat opened the scoring just shy of the seven minute mark with help from some former Pats.  Kyle Burroughs let a point shot go which redirected off Chase Harrison in front straight to Dryden Hunt.  The Pats’ former leading scorer tapped in the easy mark for his first against the Pats.  It didn’t take long for the Blue and White to respond as 1:47 later, Pavel Padakin wrapped the puck around and it skipped into the net off a skate in front to tie the game 1-1.  The Pats penalty kill took centre stage in the first, turning away four Tigers powerplay including over a minute of 5-on-3 time.  Shots favoured the home side 12-9 after the initial twenty minutes.

Goals continued to be at a premium with netminders Daniel Wapple and Marek Langhammer coming up with big saves throughout the second period.  The Pats broke the deadlock just over a minute into the frame, Sam Steel took a pass from Braden Christoffer and squeezed the puck through Langhammer.  With the puck slowly moving behind the Tigers goalie, Padakin swooped in and finished the play for his second on the night.  That would be the only goal of the frame after both penalty kills posted zeroes in the period including the Pats whiffing on an extended 5-on-3 and the shots favoured the Tigers 25-20.

Looking to tie the game early on in the third, Medicine Hat went to the powerplay.  The Tigers were given a nasty surprise when Adam Brooks won a battle in the corner and flipped the puck over everyone’s head to Austin Wagner who was hanging out at the offensive blue-line.  Wagner raced in alone and fired the puck in off the post for a shorthanded marker.  Just seconds after the Tigers’ powerplay came to an end, Patrick D’Amico dropped a pass for Taylor Cooper who unleashed a one-timer to the top corner of the goal for a 4-1 Pats lead 6:20 into the third.  The offence continued to pour in for the Pats late when Jesse Gabrielle got open on a partial break, came in off the wing and got the puck by Langhammer with a wrist shot to solidify the Pats advantage.  The Queen City Kids added insult to injury when Colton Kroeker was awarded a penalty shot and capitalized to push the final score to 6-1 for the Pats.  Daniel Wapple was named the first star in a 37 save performance as the Pats were outshot 38-32.

The Pats continue their road trip in Edmonton this Friday in an 8:00 p.m. CST puck drop at Rexall Place against the Oil Kings.  Tune in at 7:35 p.m. CST on 620 CKRM and WHL Live Web TV.