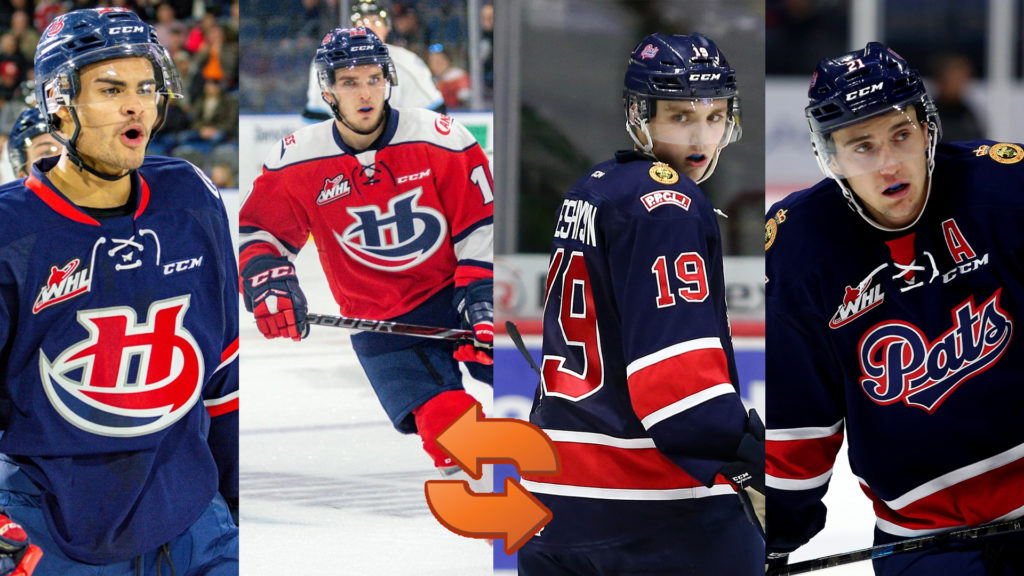 “I can’t say enough good things about Jake and Nick,” said Pats VP of Hockey Operations and GM John Paddock. “They are incredible people who have meant so much to our organization. Lethbridge is getting two outstanding individuals and we wish them all the best with their new team.”

“We could not turn down an offer of this magnitude,” added Paddock. “We are getting two good players up front in Jadon and Ty and have added some important pieces for the upcoming WHL Bantam Drafts.”

Joseph (6’1, 172), is in his third year in the WHL. The 19-year-old from Sherwood Park, Alberta has already set a career high in goals this season with 10 and is on pace to surpass his previous career high in points at 32 which was set last year. In 144 games in the league, Joseph has scored 22 goals and 44 assists for 66 points. He also has 36 WHL playoff games to his name, where he put up five goals and 15 points, reaching the conference final in two straight years.

Kolle (5’8, 178), is also in his third WHL season. A product of Kamloops, British Columbia, the 18-year-old started his career with the Portland Winterhawks and was traded to Lethbridge in October of this year. He has seven goals and four assists in 17 games so far this year. Kolle has appeared in 94 career games, scoring 14 times and adding 15 assists for 29 points.

Jake Leschyshyn was named the Pats captain prior to the start of the 2018-19 season, his fourth year as a member of the Pats. The signed second round pick of the Vegas Golden Knights is enjoying a career year with 16 goals and 32 points through 25 games to sit tied for 13th in overall scoring in the WHL. The 19-year-old played 213 games with the Pats, scoring 61 goals and 131 points. He added five goals and 10 points in 28 post-season games with Regina.

Nick Henry is playing in his third season with the Pats in the WHL. The product of Portage la Prairie, Manitoba was drafted in the fourth round of the 2017 NHL Entry Draft by the Colorado Avalanche. The 19-year-old is off to a great start in 2018-19, leading the Pats with 40 points in 25 games, good for seventh in scoring in the Western Hockey League. Henry appeared in 150 games in Regina, scoring 64 goals and 150 points. He also played in 29 playoff games, picking up 16 points.

The Pats wrap up a stretch of seven straight on the road on Friday when they visit the Brandon Wheat Kings at 7:30 p.m. on 620 CKRM. Next home game is Saturday against the Prince Albert Raiders. Tickets are available at reginapats.com, the Brandt Centre Box Office and at any Regina Safeway, where Fun Zone Tickets are $13 plus tax.