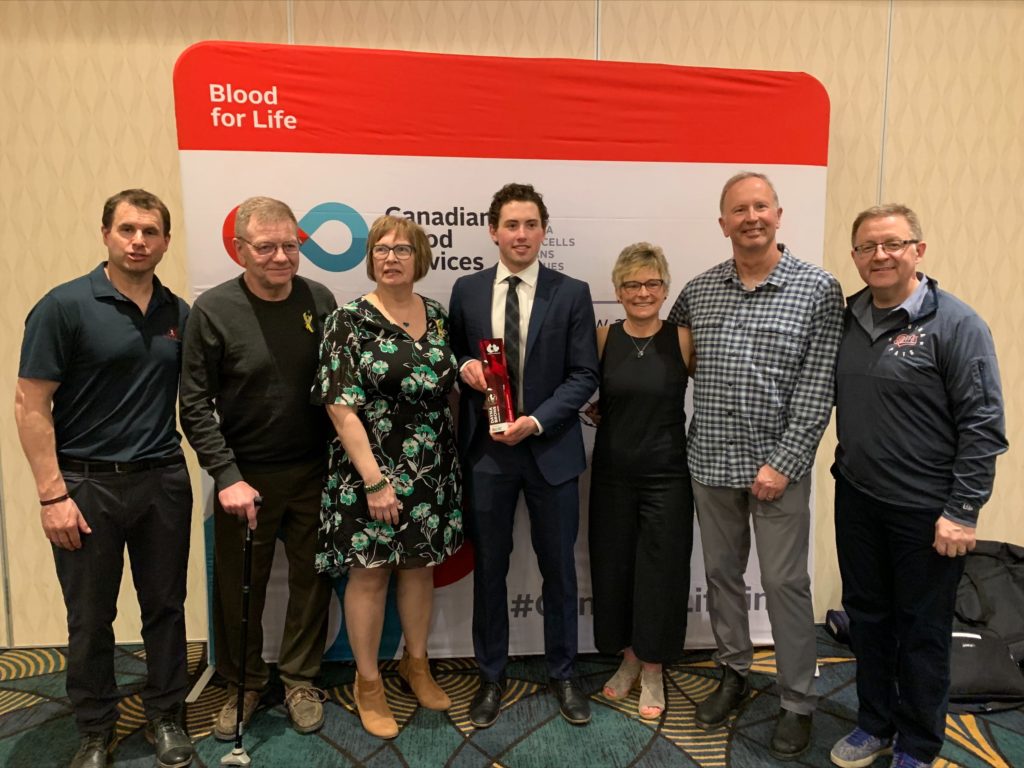 The Dayna Brons Honorary Award recognizes an individual from Canada’s hockey community who exhibits outstanding dedication towards patients who rely on blood and stem cell products in Canada.

“The last 48 hours have been a whirlwind of emotions, and this definitely tops it off,” Logan Nijhoff said. “I’m not someone to look into awards and accomplishments, but this is an honour to be recognized. Shoutout to every player ambassador who really put in their all and tried to raise awareness for such a good cause.”

Dayna Brons was the Athletic Therapist for the Humboldt Broncos Hockey Club and was on the bus that fateful day of April 6, 2018. Dayna suffered significant injuries but continued to fight for five more days before succumbing to her injuries on April 11, 2018. Dayna was 24 years old.

The ideal candidate would also be one who displays some or all of the attributes Dayna was known for, such as; humility, dedication, sacrifice, work ethic and kindness.

“Logan is just a really special person, “Hockey Gives Blood co-founder Stuart Middleton said. “Just the way he carries himself, he embodies so many traits that Dayna was known for. Humility, dedication and sacrifice. He really does that because he’s passionate about it and he’s showing the younger players that you can play hockey at a high level, but also give back to the community. That comes natural to Logan.”

Nijhoff began the season with a faceoff campaign, as for every faceoff he won, himself as well as many other partners pledged to donate for every faceoff win to the Canadian Blood Services.  He won 818 faceoffs, finishing fifth in the WHL in faceoff wins, raising $8,180. On March 3, 2022, Nijhoff held his second straight blood drive, as more than 20 members of the Regina community came forward and donated blood.

The Comox, B.C., native continued to be a force in the Regina community this season, taking home his second straight Mike Kartusch Community Service Award.

“This shows his self-awareness to recognize his platform,” Middleton added. “That takes a special person to know that what they do has an impact and will influence many other people just by something he thinks is the right thing to do. Logan is a selfless person and I really think he rises to those challenges in his role as a player ambassador. He’s followed through by being responsive and being committed. These are all things that make him a good captain and good in the community.”

It’s also the first time in history that a player in the WHL has won this award. Jacob Ingham of the Mississauga Steelheads, Matt Welsh of the Charlottetown Islanders and Braden Hache of the Kingston Frontenacs were the previous winners.

The other nominees this year were Kendra Woodland, a goaltender for the University of New Brunswick Women’s Hockey team, as well as Cole MacKay of the Soo Greyhounds of the Ontario Hockey League.