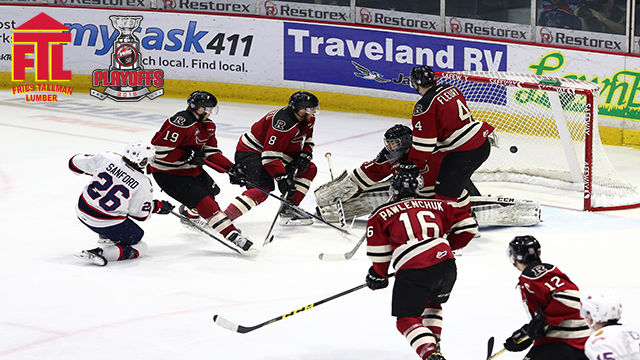 Regina, Saskatchewan – The Regina Pats (3-3-0-0) beat the Red Deer Rebels (3-3-0-0) 5-1 to even their best-of-seven Eastern Conference Semi Final series at three games each.  Sunday afternoon was the fourth sellout crowd for the Regina Pats this season and first of the playoffs.

Game Story
The Regina Pats struck first and they struck often getting goals from Jared McAmmond in the first, Connor Hobbs, Cole Sanford, Lane Zablocki in the second and Captain Colby Williams in the third.  For Red Deer, they could only muster one goal, which came in the first from Jake DeBrusk.  The Pats outshot the Rebels 40-21 overall including 22-4 in the second period alone.  In a series that has seen plenty of scoring on the power play, neither team could convert today.  Pats goaltender Tyler Brown turned away 20 shots for the victory.  The series now shits back to Red Deer for Game Seven on Tuesday night beginning at 7 p.m.

What’s Next?
The best-of-seven, second round series, now goes back to Red Deer for Game 7 on Tuesday night.  Puck drop from the Enmax Centrium is 7 p.m.  You can catch all the action on Access 7 who is travelling to Red Deer and broadcasting the game live starting at 7 p.m.  You can watch it in high definition, in Regina, on channel 70 and provincially in standard definition on channel 7.  Not near a TV.  Listen to the action on Bennett Dunlop Ford Pats Hockey on 620 CKRM with the pregame show getting underway at 6:35 p.m.