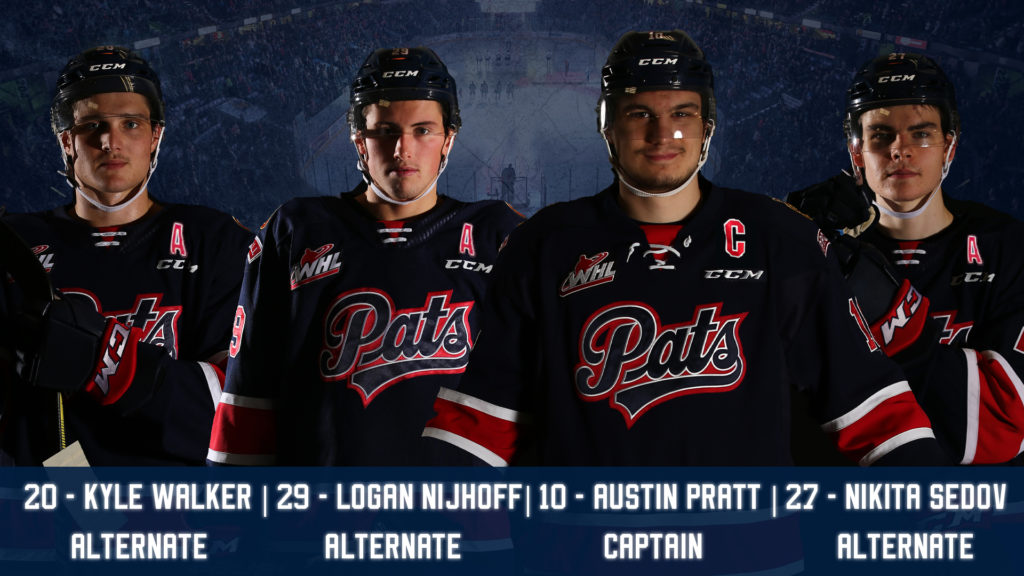 The Regina Pats Hockey Club is pleased to announce their leadership group for the 2019-20 season.

Austin Pratt has been named the 79th captain in franchise history. The 20-year-old is entering his fifth season in the Western Hockey League and third as a member of the Pats. The product of Lakeville, MN has appeared in 254 games in his career, scoring 56 goals and 117 points. He set career highs last year with the Pats, scoring 25 goals and 51 points to lead the team in scoring. Pratt was a member of the 2016 Memorial Cup host Red Deer Rebels and played with the Pats in the 100th Memorial Cup in Regina.

“We are extremely excited for Austin to wear the ‘C’ this season,” said Pats Head Coach and Assistant GM Dave Struch. “He exemplifies what it means to be a Pat and his leadership on and off the ice is a credit to him as a person and to our organization.”

19-year-old defenceman Kyle Walker is one of three players named an Alternate Captain for 2019-20. Walker, from Leduc, Alberta is starting his third season in the WHL. He began his career with the Everett Silvertips and came to Regina in a trade during the 2018-19 season. He has played in 107 games in the league, putting up three goals and 18 points. He had two goals and 10 assists in 43 games with the Pats last season.

“Kyle is a big part of our team,” added Struch. “He has earned the letter on his jersey this year by the way he carries himself on the ice and in our dressing room.”

18-year-old defenceman Nikita Sedov will also wear an ‘A’ for the year. He was drafted by the Pats in the second round of the 2018 CHL Import Draft out of Tyumen, Russia. He led all Pats defencemen in scoring last season with 19 points in 68 games and was named the team’s Charles Johnston Memorial Trophy winner as Top Defenceman for 2018-19.

“Nikita is a true leader for our club,” said Struch. “His work ethic and drive to get better every day is a great example to our players.”

The third Alternate Captain for the year will be 18-year-old forward Logan Nijhoff. He was taken in the eighth round of the 2016 WHL Bantam Draft and is entering his third season in Regina. In 89 career games in the league, the Comox, British Columbia product has scored 10 goals and 23 points. He set career highs last year with seven goals and 17 points. He has appeared in three WHL Playoff games and was a member of the Pats Memorial Cup squad in 2018.

“Logan has proven himself to the coaching staff and his teammates,” said Struch. “He is always striving to get better and brings a strong work ethic to his game every night.”

The Pats conclude the 2019 pre-season on Saturday night in Prince Albert against the Raiders at 7 p.m.