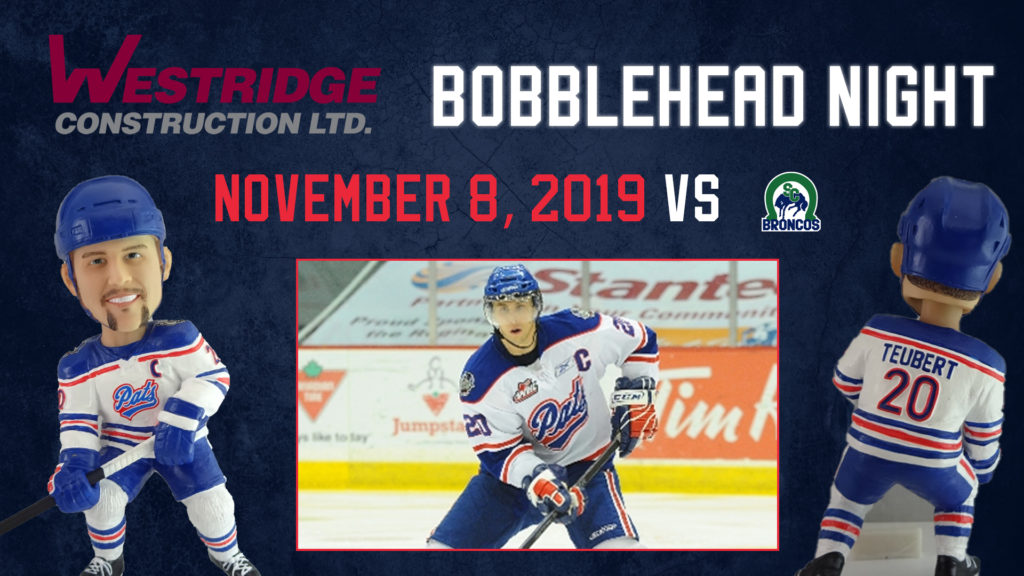 The Regina Pats Hockey Club is pleased to announce former captain Colten Teubert will be the latest Bobblehead Night Giveaway for Westridge Construction on November 8, 2019.

“We couldn’t be more excited to feature Colten this year,” said Pats Chief Operating Officer Stacey Cattell. “He did so much on the ice for our franchise as well as for Team Canada. He is one of the all-time Pats greats.”

The product of White Rock, B.C. was drafted in the first round, 13th overall by the Los Angeles Kings in the 2008 NHL Entry Draft. He was traded to the Edmonton Oilers in 2011 and played 24 games in the NHL and 167 games in the American Hockey League. His pro career took him to Germany for four seasons where he played in 174 games in the DEL.

Teubert is currently the Head Coach of the Bellingham Blazers of the WSHL.

Teubert will attend his Bobblehead Night on November 8 against the Swift Current Broncos. Tickets for the game are available at reginapats.com, the Brandt Centre Box Office and at any Regina Safeway location.

Regina continue the regular season on Friday at home against the Medicine Hat Tigers at 7 p.m. at the Brandt Centre.