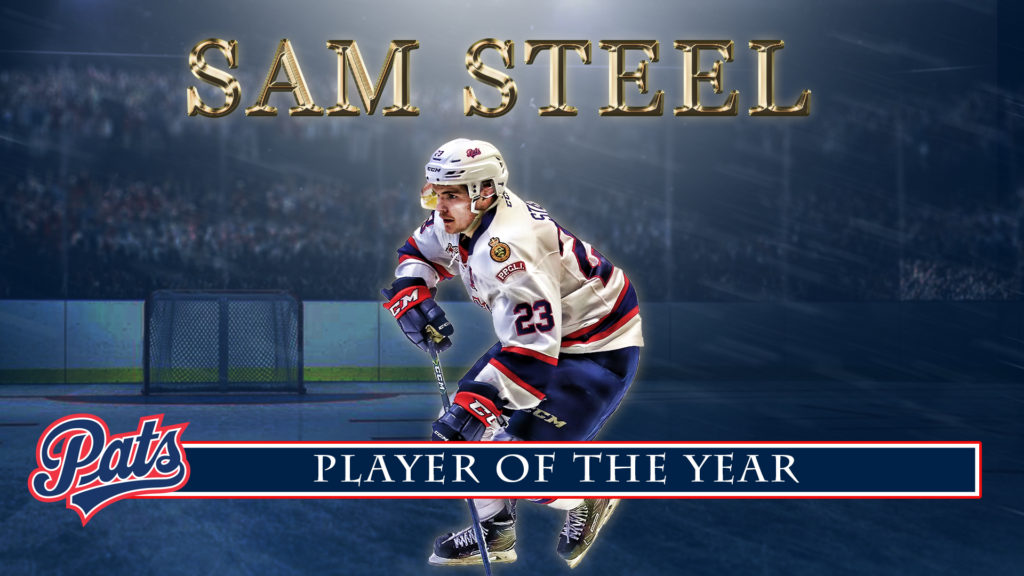 The Regina Pats Hockey Club announced its individual award winners ahead of the final home game of the season against the Brandon Wheat Kings.  The Pats presented nine awards recognizing the individual accomplishments of members of the team.

Player of the Year – Sam Steel
After 70 points in 72 games last season, Sam Steel exploded offensively in his third year in the WHL. Steel leads the WHL in scoring with 130 points in 64 games. The Anaheim Ducks first round pick is tied for third in the WHL with 49 goals, and is second with 81 assists.  Not just an offensive threat, Steel ranks second in the WHL at plus 48.
2015-16 Award Winner: Adam Brooks

Charles Johnston Memorial Top Defenceman – Connor Hobbs and Sergey Zborovskiy
Connor Hobbs enters Friday night, first among all WHL defenceman in points (82) and goals (30). The signed Washington Capitals prospect has doubled his previous career high in points from last season when he had 41 in 58 games. Hobbs is second with 27 powerplay assists, and third with 13 powerplay goals. Meanwhile, Sergey Zborovskiy has enjoyed the best plus/minus season in the WHL since 1997/98. Zborovskiy enters Friday at plus 68 on the season, the last player in the WHL to have a better plus/minus in a season was Andrew Ferrence of the Portland Winterhawks at plus 75 in 97/98.
2015-16 Award Winner: Connor Hobbs

Nick Papas Rookie of the Year – Nick Henry
Leading Pats rookies in scoring most of the season, Nick Henry has found a home on a line with Sam Steel and Dawson Leedahl. The 17-year-old is second among all WHL rookies with 80 points in 70 games. Henry is second among rookies with 35 goals, and 45 assists while ranking first at plus 31. Henry’s 80 points is the most by a Pats rookie since Dmitri Nabakov in 1996-97.
2015-16 Award Winner: Lane Zablocki

Hub Bishop Most Sportsmanlike – Chase Harrison
Chase Harrison is another name on the list of Pats enjoying a career season. The overager, from Winnipeg, has put up a career high 46 points through 65 games, and is fifth in the WHL at plus 47.  Despite playing in every situation for the Pats, Harrison has only accumulated 18 penalty minutes throughout the season.
2015-16 Award Winner: Sam Steel

Bill Hicke Most Popular Player – Adam Brooks
Just take a look at the lineups for autographs during postgame skates to see the evidence of Adam Brooks’ popularity with fans.  The Pats’ captain and second leading scorer ran away with the fan voting for this award.  Brooks returned the fans’ adulation with highlight reel play after highlight reel play.
2015-16 Award Winner: Adam Brooks

Scholastic Player of the Year – Jake Leschyshyn
As a young player in the league, school is as much a part of life as hockey.  Striking the balance between book work and life at the rink isn’t an easy one.  In his sophomore season, Jake Leschyshyn put together a strong campaign on the ice with a career high 40 points prior to his season ending injury.  While doing that he maintained an 86.2 per cent grade average throughout the school year.
2015-16 Award Winner: Lane Zablocki

Three Star Award – Sam Steel
The Pats’ leading scorer was named a star in 26 games this season including an impressive 14 first-star performances.  Steel is a full 12 ‘star points’ clear of Adam Brooks who captured the second most points.  Dawson Leedahl rounds out the top three with 25 points on the season.
2015-16 Award Winner: Adam Brooks