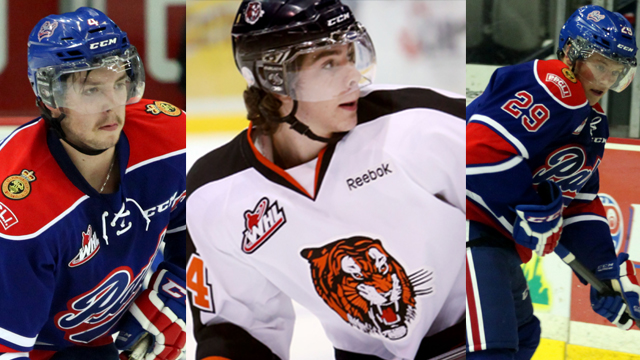 Regina, Saskatchewan – Regina Pats Head Coach and Senior VP of Hockey Operations John Paddock announced today the team has acquired defenceman Connor Hobbs (’97), a 2nd Round pick in 2016 and a 3rd Round pick in 2015 in exchange for defenceman Kyle Burroughs and forward Dryden Hunt.

Hobbs (6’1”, 187 lbs) was the Prince Albert Raiders’ 4th Round selection (67th Overall) in the 2012 WHL Bantam Draft before being acquired by Medicine Hat.  Last season with the Saskatoon Blazers, Hobbs registered 23 points (11G, 12A) in 33 games.  The Saskatoon, SK native made his WHL debut with the Tigers last season, playing ten games while tallying a goal and two assists.  Hobbs caught the eye of Hockey Canada and earned an invite to play for Team Canada at the Ivan Hlinka Memorial Tournament this summer.  Hobbs posted two assists in five games as Canada went on to win Gold.  In 2014-15 the 17 year old has a goal and an assist in 12 games for the Tigers.  NHL Central Scouting has Hobbs listed as a ‘C’ skater (4th-6th Round) for the 2015 NHL Entry Draft.

“Connor is an outstanding 17 year old as one of the seven defenceman to play for Canada at the Ivan Hlinka tournament this summer,” commented John Paddock.  “His future is very bright in the WHL and he should be playing in this league.  He was the best defenceman at the World Junior-A Challenge in Kindersley and we’re excited to acquire a player of his caliber to join our core of young talent.”

Kyle Burroughs was the Pats’ 3rd Round WHL Bantam Draft pick in 2010 and has been the captain of the Pats since the 2013-14 season.  The Langley, B.C. native played 220 games in the Blue and White (T-36th all-time) while recording 103 points (20G, 83A) and 264 penalty minutes over that span.  Since being selected in the 7th Round of the 2013 NHL Entry Draft by the New York Islanders, Burroughs has evolved into one of the top defencemen in the WHL.  This season, Burroughs has been a fixture among the league leaders in plus/minus, and currently leads the league at +31.  Internationally, Burroughs was a member of Team Pacific at the 2012 World U17 Hockey Challenge.  Burroughs made his professional debut last season, playing nine games for the Bridgeport Sound Tigers following the Pats’ campaign.

“It’s obviously a very difficult day when you have to trade your captain,” said Paddock.  “This is a trade we’ve completed for similar reasons as the Klimchuk-Gabrielle deal.  Kyle is as good a captain as there is in junior hockey, an outstanding player and leader.  We will miss him, but this is a step we had to take as an organization in order to build for the future and make up for deficiencies in future drafts.”

Dryden Hunt was a list player of the Pats in 2011 and went on to make the team following training camp, playing for the Blue and White as a 16 year old.  The Nelson, B.C. product overcame no small amount of adversity in his time with the Pats, missing all but two games of the 2012-13 season due to injuries.  Hunt cleared that obstacle and has played 163 games for the Pats while posting 97 points (40G, 57A) in that span.  After a breakout year in 2013-14 (40PTS, 62GP), Hunt took his game to an even higher level in 2014-15.  The winger sits 12th in the WHL scoring with 47 points (14G, 33A) in 37 games played.  Hunt’s play with the Pats last season caught the eye of NHL scouts and he was invited to the Carolina Hurricanes’ summer development and fall rookie camps this off-season.

“Dryden is a tremendous player, hard worker and a great leader in his own way,” Paddock continued.  “We’re giving up an outstanding player, but once again, it’s a step we have to take.  We wish both Dryden and Kyle well as they move on from our organization.”

The Regina Pats thank Kyle and Dryden for their incredible contributions to both the organization and community of Regina and wish them luck as they move on.  Both have been fantastic representatives of the Pats in their time with the team.

Connor Hobbs makes his Pats debut Wednesday night when the Queen City Kids faceoff with the Everett Silvertips at the Brandt Centre in a 7:00 p.m. puck drop.  Tickets are available through Ticketmaster.ca, the Brandt Centre Box Office and Safeway locations throughout Regina. 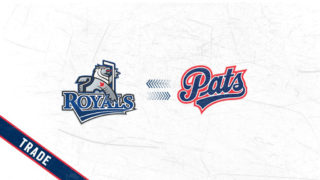