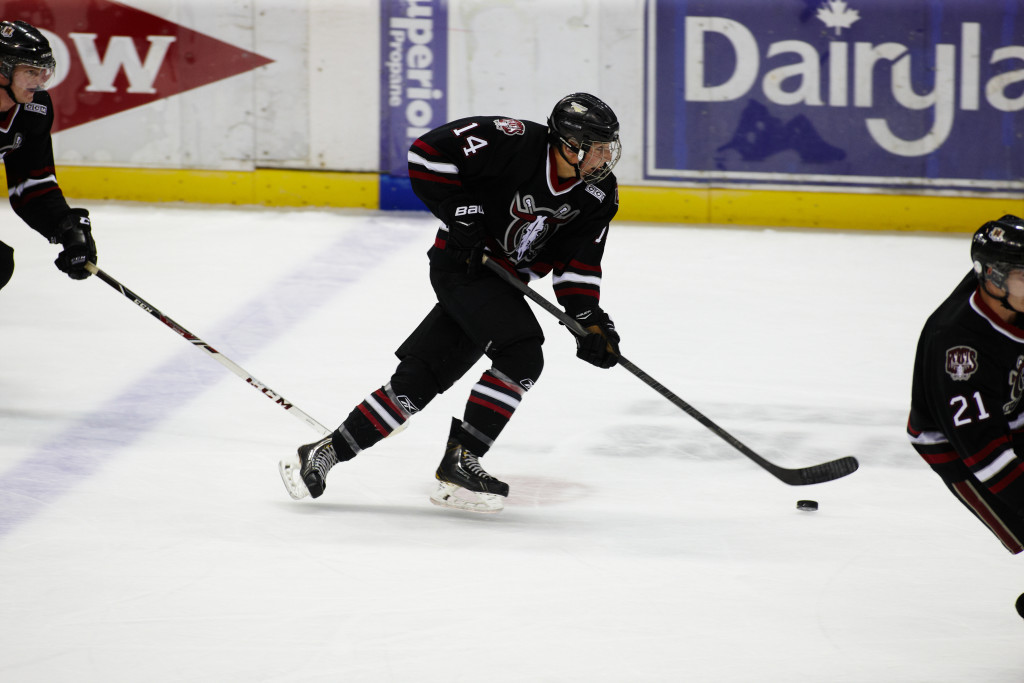 Regina, Saskatchewan – Regina Pats Sr. VP of Hockey Operations and Head Coach John Paddock announced today the team has acquired top prospect forward Jake Leschyshyn (’99) and a 2017 4th Round Bantam Draft pick in exchange for forward Connor Gay (’95), a 2016 1st Round pick, 2015 2nd Round pick and 2017 7th Round pick.  John Paddock will be available to speak with the media at 2:30 p.m. in the Media/VIP room in the lower level of the Brandt Centre.

Jake Leschyshyn (5’10”, 167 lbs) was the Rebels’ 6th Overall selection in the 2014 WHL Bantam Draft.  In his draft year, Leschyshyn posted 59 points (31G, 28A) in 31 games with the Saskatoon Stallions of the SBAAHL and in nine games with the SMAAAHL’s Saskatoon Blazers, had 6 points (2G, 4A).  In his first year playing Midget AAA full time, Leschyshyn has 24 points (10G, 14A) in 25 games with the Blazers.  The son of former NHL’er Curtis Leschyshyn, Jake will be a member of Team Saskatchewan at the 2015 Canada Winter Games in Prince George February 21st-March 5th.

“In Jake we’re getting an outstanding young player taken 6th overall in the Bantam Draft last year,” said John Paddock.  “He has a great hockey pedigree and fits in with the time-frame of us molding a team for the future.  Having already added two 17 year olds sitting a year older than the 1998 age group, we’ve now add premiere player to our crop of prospects.”

Connor Gay was a list player of the Pats who went on to make his debut in the 2012-13 season.  He went on to play 135 games for the Blue and White while registering 92 points (40G, 52A).  After totaling four points in his 17 year old season, Gay broke out for 43 points (19G, 24A) last season and has already surpassed that mark with 44 points (20G, 24A) in 39 games this year.  Connor has been an active member in the community Pats and was an exemplary ambassador for the Pats around Regina in his three years wearing the Blue and White.

“In a short time coaching Connor, I can’t say enough about his play, leadership and attitude,” continued Paddock.  “We’ll miss him in Regina and we wish him the best in Red Deer.  In the end it was a deal we couldn’t refuse as we look to the future.”

The Pats are back on the ice Wednesday night against the Everett Silvertips in a 7:00 p.m. puck drop.  Tickets are available through Ticketmaster.ca, the Brandt Centre Box Office and Safeway locations throughout Regina.