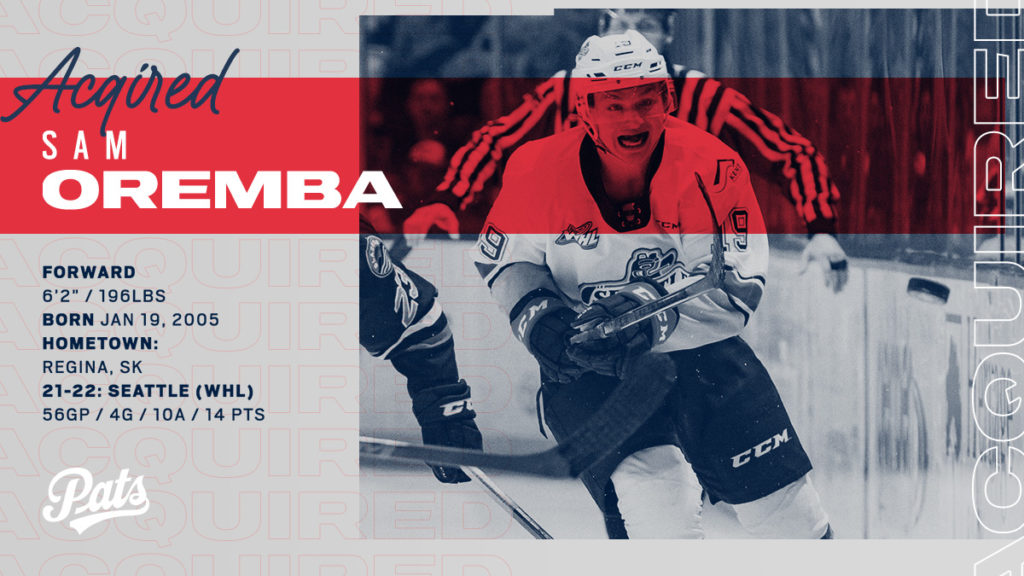 Regina, Sask. — The Regina Pats have acquired 2005-born forward Sam Oremba from the Seattle Thunderbirds in exchange for a 2023 second-round pick, 2024 first-round pick and 2025 third-round pick.

“We are pleased to welcome Sam home to Regina, and to the Regina Pats organization,” Regina Pats General Manager and Head Coach John Paddock said. “He is a top player from his age group in Western Canada and we believe his future is bright, and so is ours with his addition. We look forward to seeing him step onto the ice with us.”

Oremba, 17, has recorded two assists in two games this season after he totalled 14 points (4G-10A) in 56 games with the Thunderbirds last season, helping Seattle reach the Western Hockey League final. The Regina, Sask. product played for Seattle in the shortened 2020-21 season as a 15-year-old, tallying five points (2G-3A) in 15 games. Oremba was drafted seventh overall by the Thunderbirds in the 2020 WHL Prospects Draft.

The 6-foot-2, 196 lb. forward previously played for the Regina Pat’ Canadians and Regina Monarchs before heading to Seattle. During the 2019-20 season with the Monarchs, Oremba broke Jaden Schwartz’s SBAAHL points record with 133 points (75G-58A) in 31 games.