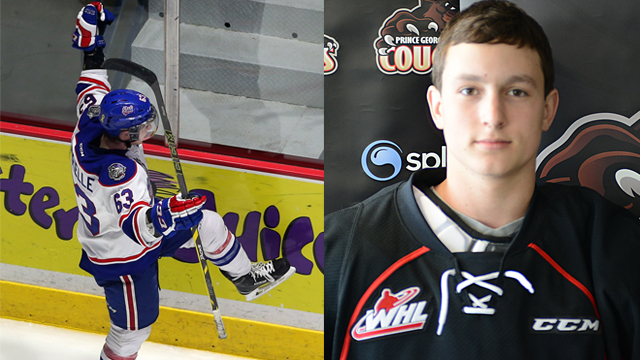 Regina, Saskatchewan – The Regina Pats have traded Forward Jesse Gabrielle to the Prince George Cougars.   In exchange, the Pats acquired Cougar prospect, Forward Lane Zablocki.  Also included in the trade, Regina received Prince George’s fourth round draft pick in 2016, while the Blue and White give up a fourth round selection in 2017.

“We are happy to get a young player of Lane’s calibre to add to our program, he bolsters our team’s depth and talent of players born in 1998,” said Pats Head Coach and GM John Paddock.  “Giving up a player of Jesse’s abilities isn’t easy.  He was a positive force on our team but this move is about the long-term.”

Jesse Gabrielle was acquired from Brandon Wheat Kings at 2015 WHL Trade Deadline.  In 33 games with the Pats, Gabrielle posted 19 points (10G, 9A) and 43 penalty minutes.  The Moosomin, SK native was drafted in the fourth round, 103rd overall by the Boston Bruins in the 2015 NHL Entry Draft.

The Regina Pats open training camp on August 29, 2015 at the Cooperators Centre.