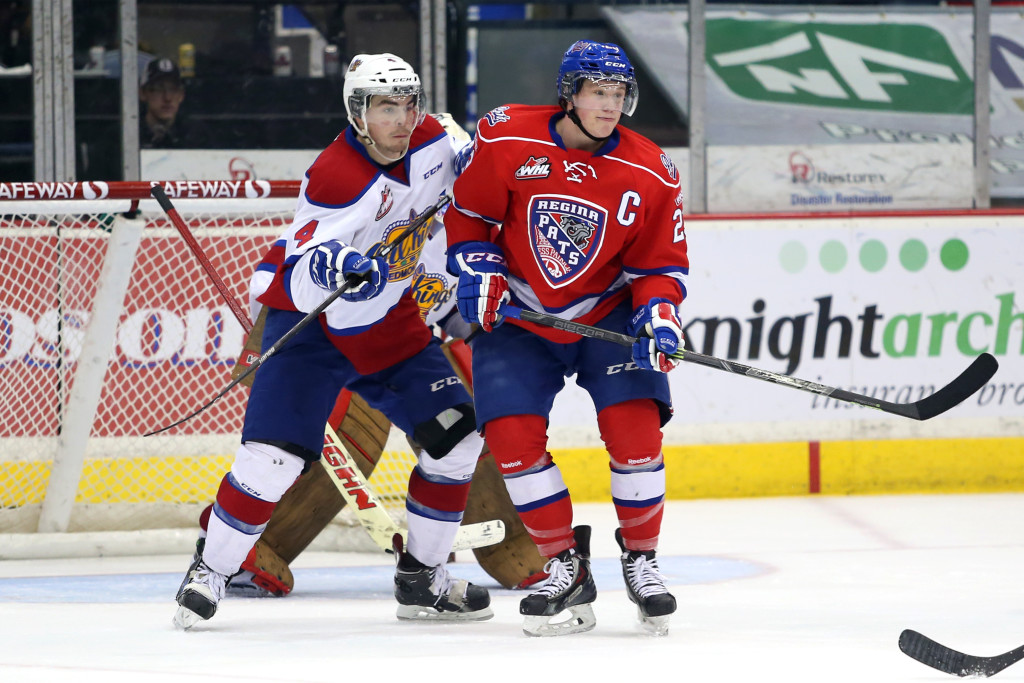 The opening minutes belonged to the Pats as they generated some good scoring opportunities and looked to take advantage of an early powerplay.  Oil Kings netminder Tristan Jarry continued his strong play against the Pats with a number of stops on the penalty kill and things turned after the penalty expired.  Edmonton wheeled around into a four-on-two rush and the puck ended up with Dysin Mayo who fired from the slot to open the scoring 4:49 into the frame.  After another unsuccessful powerplay for the Pats, Edmonton struck again when a turnover in the Pats end turned into a two-on-one just across the midway point of the period.  Lane Bauer finished the play for his fourth goal against the Blue and White this season.  The Oil Kings made it 3-0 when Cole Benson blocked a shot in his own end and chased the puck down into the Pats’ zone.  Benson wrapped around the Regina net and centered for Brayden Brown who shoveled the puck by Daniel Wapple at the 13:42 mark.  The home side led the shots 10-9 after one.

With the Pats looking for something to turn the game around, they were forced to kill an early double minor.  The Oil Kings took advantage of the opportunity and struck on both of the minors.  First it was Bauer sending a rebound into an empty net after a fortuitous bounce for the forward.  Luke Bertolucci nabbed the second powerplay marker, again on a rebound as he was able to find the loose puck for a 5-0 lead at the 3:10 mark.  That would be the end of Daniel Wapple’s night as Tyler Brown stepped in for the Pats.  Bauer completed the hat-trick 11:10 into the period, again on a rebound.  The Pats broke the goose egg late in the period when Adam Brooks fed Austin Wagner for a one-timer on a two-on-one.  The Oil Kings continued to lead the shot count 21-18.

The third started out with the Pats snipping away some of the lead.  Austin Wagner drove up the ice and centered for Rykr Cole who tipped the puck on goal.  Jarry made the initial save, but Adam Brooks knocked home the Pats’ second goal.  That was as close as the Pats would get as they fell by a 6-2 score while outshooting the Oil Kings 31-28 in the loss.

The Pats’ three-in-three set continues tomorrow night in Red Deer as the Pats take on Connor Gay and the Rebels.  Tune in at 7:35 p.m. CST for the action on 620 CKRM and WHL Live Web TV.