Nijhoff Leaves Legacy As One Of Greatest Leaders In Pats History 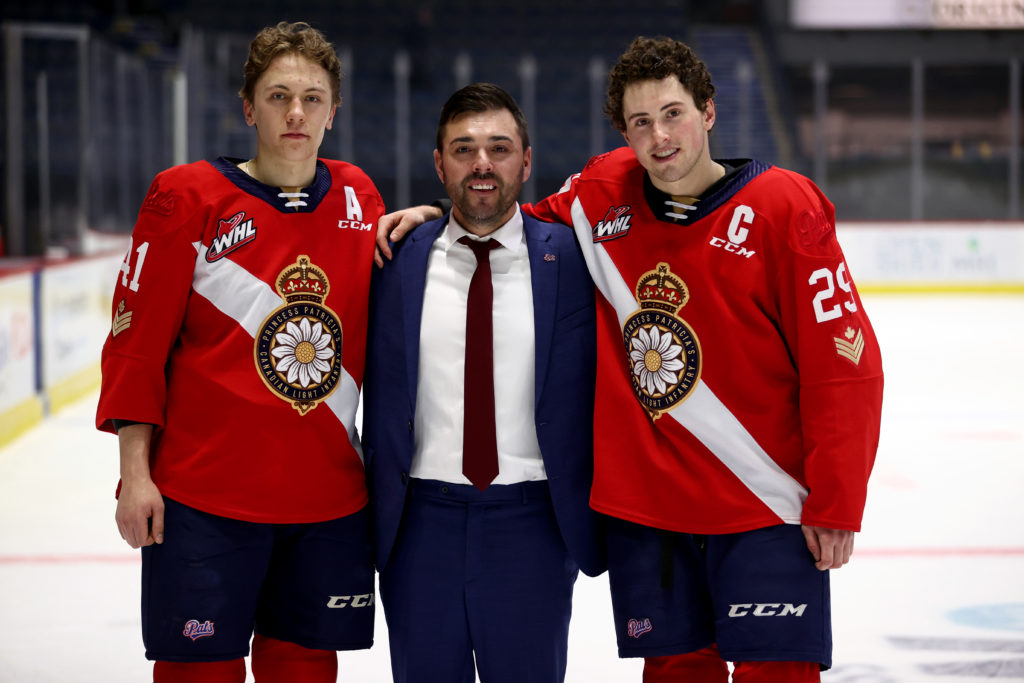 Regina, Sask. — Today, the Regina Pats will focus on saying goodbye to former captain Logan Nijhoff, as we wrap up our look at the Pats three overage players and the impact each had on the team and community.

There are many words to describe Nijhoff: selfless, determined, mature — an exemplary leader. What is undeniable during his five-plus seasons in the Queen City is that his impact was felt far beyond the ice and dressing room. In addition to his talent and all the character traits that made him a natural choice for captain, it’s Nijhoff’s work in the community that really stand out and make him one of the best captains in franchise history.

This season, the Comox Valley, B.C. native took home his second straight Community Service Award. He began the season with a face-off campaign, where for every face-off he won, he pledged to donate to the Canadian Blood Services. Nijhoff won 818 face-offs, raising $8,180. He also held his second straight community blood drive on March 3, 2022, where more than 20 members of the Regina community came forward to donate blood. Nijhoff’s contributions to Canadian Blood Services were so great that he was awarded the 2022 Dayna Brons Honorary Award, which recognizes an individual from Canada’s hockey community who exhibits outstanding dedication towards patients who rely on blood and stem cell products in Canada.

“I’m not really one to look into individual awards but to be able to meet the Brons family and learn more about Dayna and to have my name in the same sentence as her is a big honour,” Nijhoff said. “I hope I was able to inspire some other players to do the best that they can in the community. That and being the captain of the Pats are definitely my two biggest accomplishments.” 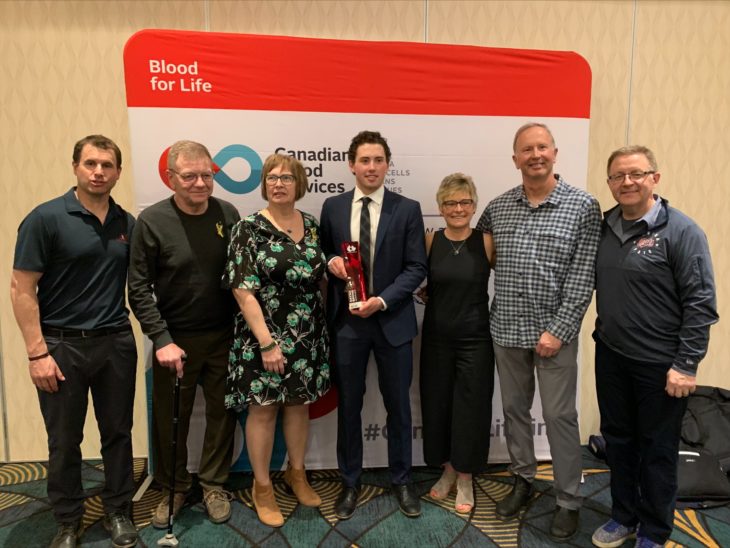 On the ice, the 20-year-old centre finished his fifth and final season with the Pats with career highs in goals (25) assists (24) and points (49) in 57 games, while scoring eight goals over the final six games of his WHL career. Logan went on later to be named the Pats unsung hero for the second straight season. He also won 58.3% of his face-offs this season, which was the third-highest in the WHL, while his 818 face-off wins were the fifth most in the league.

Over the course of his career, Nijhoff played in 231 regular season games with the Pats, scoring 123 points (61G-62A), while winning 2,165 face-offs, finishing with a 53.4% face-off win percentage. Although he finishes his career with just three games of playoff experience, his impact on the community, organization and his teammates will be remembered without question.

“Myself and Ryker [Evans] did everything we could to help the organization in every way we could,” Nijhoff said. “If we were able to leave a lasting impact, that’s something we’re very proud of. I’ll certainty be following the Pats for the rest of my life. I’m excited to see what they can do next year. They have a phenomenal group of young players that will lead the way and get the team back to where it should be.” 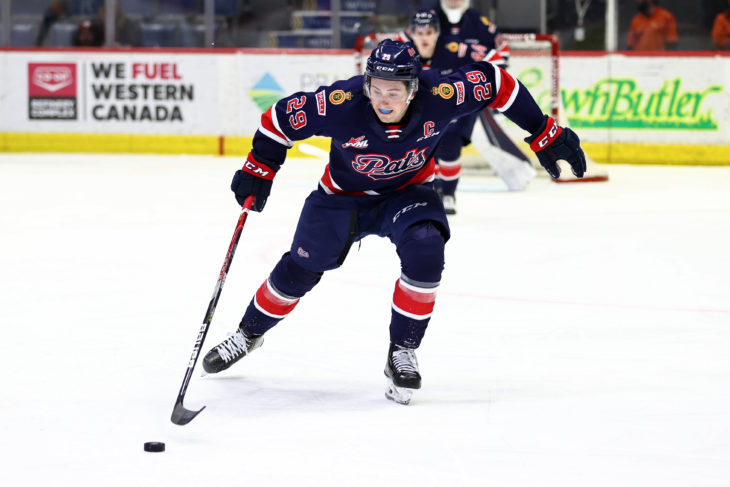 The last three to four weeks have been very emotional for Logan, as he’s gone from signing a two-year American Hockey League contract with the San Diego Gulls, to playing his last game as a member of the Pats on April 17, to then winning the Dayna Brons Honorary Award, and to jumping on a flight to San Diego to join the Gulls for their playoff run.

“We were working so hard and I really believed we were going to make the playoffs and to not have that happen was a heart breaker,” Nijhoff added. “Going into the Sunday knowing it was my last game was very emotional. Then being surprised with the Dayna Brons Honorary Award the next day, which was such a special thing for me and my family. Then I’m on a plane the next morning and got here and pretty much skated here the next day. It hasn’t sunk in, I haven’t had down time.” 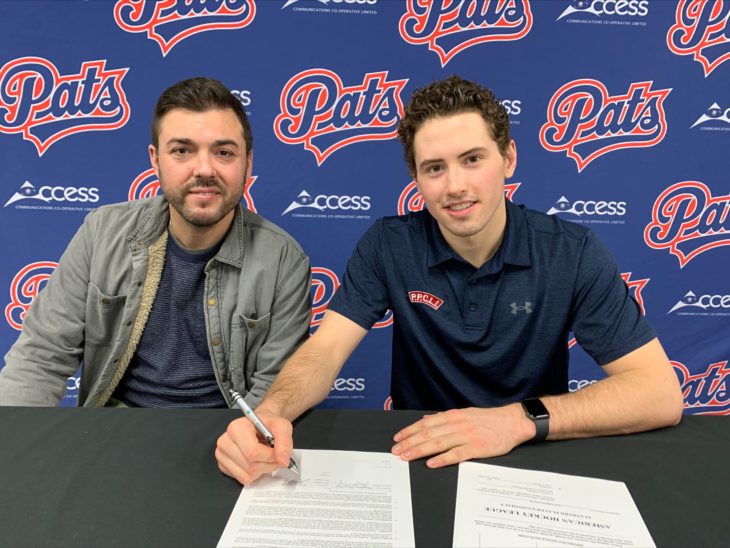 Nijhoff made his AHL debut on April 26 against the Stockton Heat, playing on their fourth line. He’s now got three regular season games with the Gulls under his belt, expressing his excitement for the playoffs, as they take on the Ontario Reign in round one beginning on Wednesday, May 4.

“It’s exciting heading into playoffs and getting a chance to be in the playoffs with a different team,” he added. “I’m still pretty upset we weren’t able to do it with Regina, as it was a goal of mine to get the team back and I wasn’t able to do that. It took a toll on me and now I have a second chance here so I’m looking to make the most of it.”

With the quick transition from Regina to San Diego, Nijhoff says the coaching staff with the Gulls and teammate Hunter Drew have made him feel at home.

“The guys and the coaching staff have been phenomenal,” he said. “They’ve really helped me out with the transition. I was lucky enough to room with Hunter Drew at the Ducks camp in the fall and we’ve had a pretty good connection. It was a pretty quick transition to leave Regina only two days after we lost out. Getting here and only getting a couple skates in before my first game made it a whirlwind week. Now that it’s calmed down and sunk in, it’s pretty special.”

Nijhoff admitted he had nerves heading into his pro debut, but says he tried to treat it like any other game.

“It was a phenomenal experience,” Nijhoff said on his debut with the Gulls. “Moving up a level is a bit more nerve-racking, but after I got my first couple shifts out of the way, it seemed to go pretty smoothly. It’s a big jump, but I was fortunate that my first game was against the best team in this division so the pace of play was a lot faster. Everyone moves a lot faster, the puck moves a lot faster. Certainty a lot of bigger guys so you really gotta use your stick well to create turnovers. The pace of play and physicality has definitely been a big jump from major junior.” 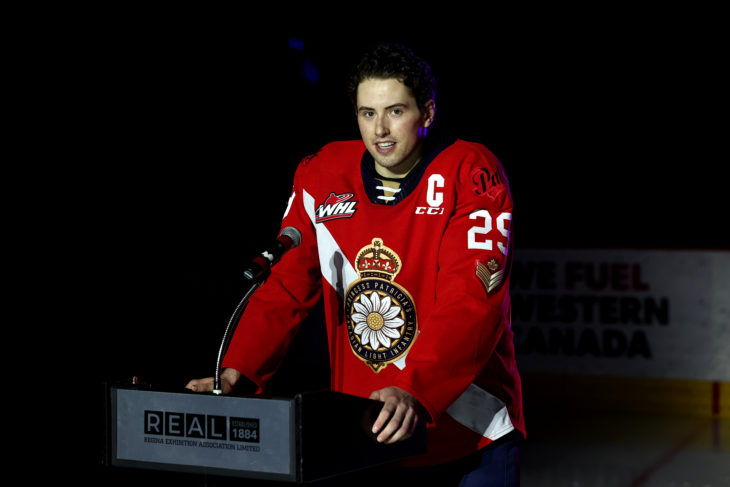 One of the big things Nijhoff looks back on is the development of him and Ryker Evans, now that both of them have inked pro deals. Nijhoff was an eighth round pick and Evans was a 10th-rounder, as they were both selected by the Pats in 2016. Nijhoff didn’t join the Pats until the middle of the 2017-18 season as a 16-year-old, and now goes down as just one of four other Pats to play at least a game in six seasons with the franchise, as Nijhoff made his WHL debut during the 2016-17 season.

“[Evans and I] actually talked about that when we got to spend some time together on Monday after the season came to an end,” Nijhoff said. “It’s really cool looking back at it. Back to our first day at camp in Regina. We were kind of the underdogs. We didn’t get a ton of attention from anyone and we just had to work hard. To have a guy like that be my best friend throughout it all in Regina is certainly special. To joke about where we came from is a special memory. He will be a good friend for a while and hopefully we will be playing against each other a lot down the road.”