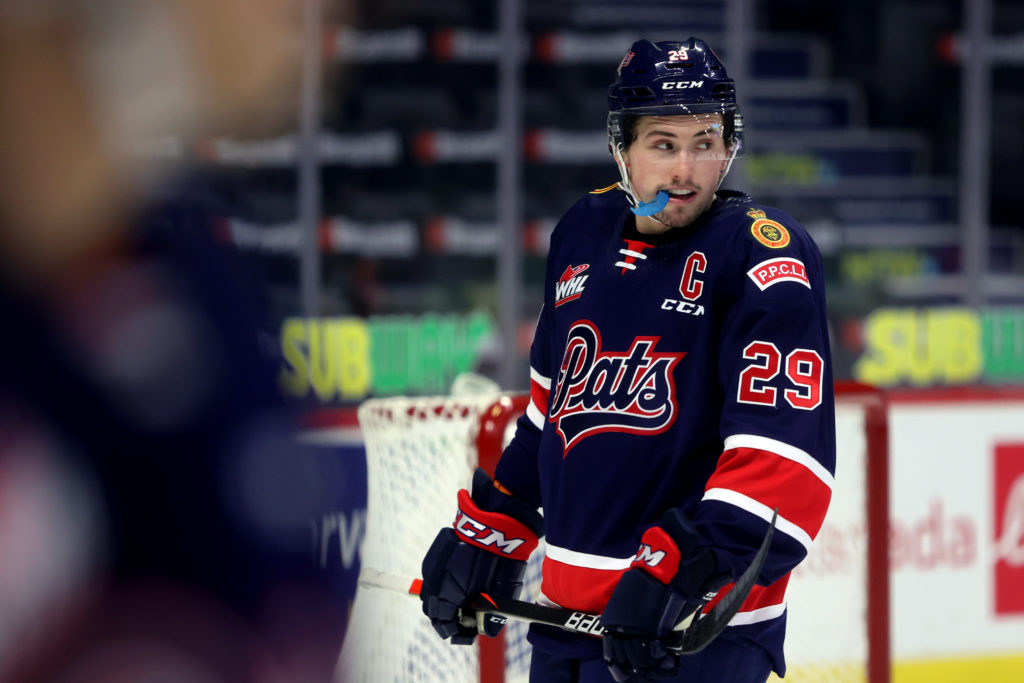 Today, he begins the journey to Anaheim Ducks training camp where he will take part in the 2021 Rookie Faceoff tournament from Sept. 17-20, hosted by the Arizona Coyotes in Scottsdale, AZ.

“It’s extremely exciting and humbling to be recognized by an [NHL] organization,” Nijhoff said following practice last week. “I was passed up three times and just kind of kept my head down. To be given this opportunity last minute, I’m looking to go down there and work hard, play a role and get a look by an NHL team.”

The Comox Valley, B.C., native is heading into his fifth WHL season and second as the Pats captain. For Nijhoff, it’s an opportunity to build off his strong 2020-21 campaign where he scored 10 goals and tallied 17 points in 24 games, while also taking home the Rick Rypien Memorial Award for unsung hero and the Mike Kartusch Community Service Award.

As a kid growing up on Vancouver Island, Nijhoff had many different sports to choose from. Outside of hockey, he played baseball, basketball, volleyball, and enjoyed biking and skiing, but it was his dad and older brother that made the 20-year-old fall in love with hockey.

“I started skating when I was about two or three. Growing up my biggest idols were my dad and my brother,” Nijhoff said. “My brother [Liam], being three years older, was always playing hockey. I was that kid playing mini-sticks around the rink and I just fell in love with it right away with the pace of the play and the physicality. I always loved skating fast and getting out there and having fun with my friends.”

Our captain does it all, on and off the ice 👏

As a natural athlete, Logan had to make a tough choice to focus just on hockey. Both his parents were big skiers and put him into skiing at age four. His father preached to be a versatile athlete, but it wasn’t until he broke his collarbone skiing and missed a full season of spring hockey that Logan finally decided it was time to focus on his first love: hockey.

He hasn’t looked back since.

The 6’0”, 189 lb. forward made a huge step in his hockey career at age 14, moving off Vancouver Island to attend Okanagan Hockey Academy, located in British Columbia’s interior. That’s where things started to take off, after being selected by the Pats in the eighth-round of the 2016 WHL Bantam Draft.

“My brother went to the Okanagan Hockey Academy and loved it, and from there on out I had my eyes set on going there,” Nijhoff said. “It’s a wicked program. You go to school in the morning, then you skate and workout. They have top notch coaches. I was fortunate enough to have Bruno Campese who coached in the WHL as well as Stu Barnes, who played 11 seasons in the NHL.

Playing under both Campese and Barnes pushed Nijhoff to be better, as well as playing with Ben McCartney (AHL), Connor Bouchard (WHL) and Mitchell Brown (WHL). Twenty-one other teams passed up on Nijhoff, but it was his work ethic and determination that got him to this point.

“I just put my head down,” Nijhoff recalled. “John [Paddock] and his whole staff have always believed in me, and I’ve always used that as motivation to work in the gym harder, prove myself and get a spot on the team when I was 16. I’ve found my role in the WHL and things have worked out.”

Now going into his second season as Pats captain and third as part of the Pats leadership group, Nijhoff thanks all of the previous leaders who helped shape him into the captain he is today.

“It’s a huge honour to captain this team, looking back at the guys who were my captains like Adam Brooks [Toronto Maple Leafs], Sam Steel [Anaheim Ducks], Jake Leschyshyn [Henderson Silver Knights]. I was very fortunate to learn a lot from them and the coaching staff. I like being involved in the team and being a mentor for the younger guys and having a positive attitude.”

Nijhoff added that one of the things he learned from his first captain — Brooks — was how to keep the team calm in stressful situations.

“I’ve been in a lot of those situations, being in big games as a young guy,” Nijhoff said. “Just talking to them, telling them it’s just another hockey game and I want to pass down a lot of the stuff that was passed to me. I like to lead by example, being vocal and keeping the boys in sort.”

Outside of being named the 80th captain in franchisee history prior to last season, Nijhoff said two of the other big honours were winning the Rick Rypien Memorial Award for unsung hero and the Mike Kartusch Community Service Award: two awards that recognize a player for his work off the ice and in the dressing room. Nijhoff is a hockey gives blood player ambassador and runs his own blood drive.

“To be awarded those by the coaches meant a lot to me,” Nijhoff added. “I had a lot of support from hockey gives blood, as well as some local businesses, such as Extreme Hockey and Next Level Hockey. I had an idea to run a blood drive, as there was a shortage due to the pandemic. Huge thanks to the hockey community for supporting me as I was able to get over 100 first time donors. I can’t credit the community enough for coming together.”