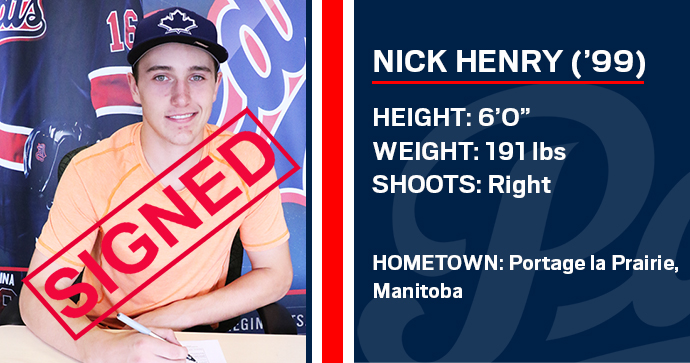 Regina, Saskatchewan – The Regina Pats Hockey Club is pleased to announce the signing of Nick Henry (’99) to a WHL Standard Player Agreement.

“We are very happy to have Nick sign with the organization,” said Regina Pats Head Coach and GM John Paddock.  “He’s a talented player who can have an immediate impact in our lineup.”

The Regina Pats acquired the rights to Henry in a trade with the Everett Silvertips at last May’s WHL Bantam Draft.  In exchange for the rights to the 6’0”, 191 pound forward from Portage la Prairie, Manitoba, the Blue and White gave up a sixth round draft pick and a second round pick in 2017.

Last season, Nick Henry was named the Manitoba Junior Hockey League’s (MJHL) Rookie of the Year.  He helped the Terriers to a 52-6 regular season record and MJHL Championship title.  In 50 regular season games, last season, he record 61 points (26G, 35A).  During the playoffs, he tallied 14 points, (8G, 6A) in 12 games.

About the Regina Pats
Named for the Princess Patricia’s Canadian Light Infantry, the Western Hockey League’s Regina Pats are the oldest major junior hockey franchise in the world operating from its original location. Since their founding in 1917, the Pats have won three Memorial Cup Championships and compete in the WHL’s Eastern Division.  To learn more about the Pats, call 306-337-1535 or visit www.reginapats.com.