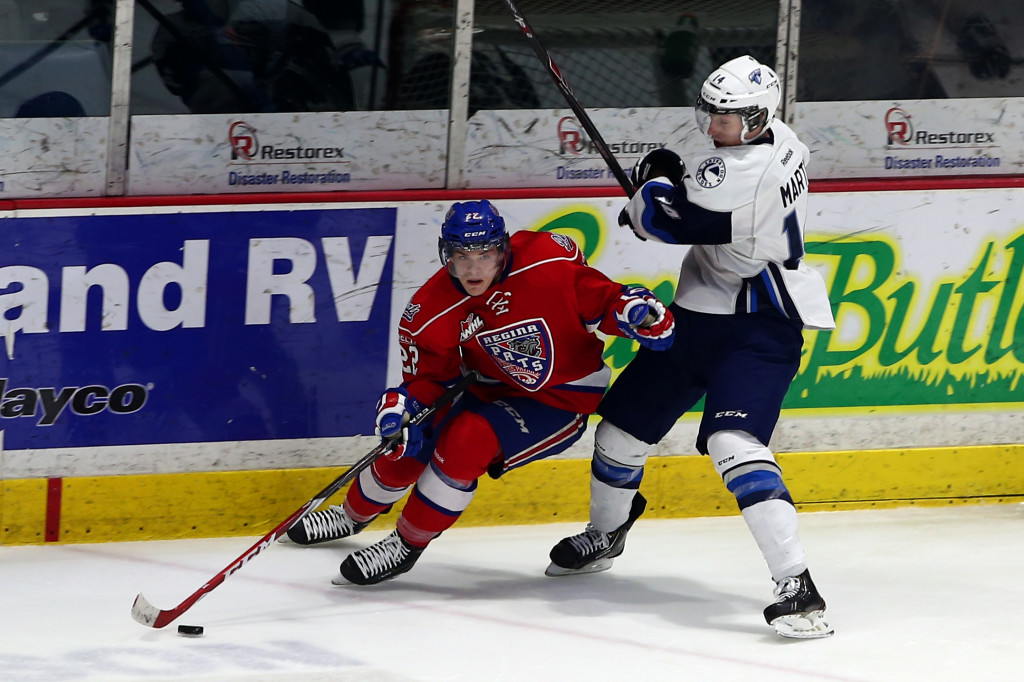 With a massive crowd for Team Up for Respect Day, the home side gave them something to cheer about early.  Sam McKechnie battled a bouncing puck past Connor Hobbs and finished on the backhand to beat Daniel Wapple and open the scoring.  Much like Friday night, the Blades held sway over most the top scoring chances.  Jared McAmmond had the best opportunity for the Pats when he fired toward a mostly open net, but Nik Amundrud dove back to knock away the chance.  After the opening twenty minutes, the Blades held the 1-0 lead and an 11-8 edge in shots.

After a successful night on the powerplay on Saturday, the Pats went to work with the man advantage early in the second looking to tie the game.  The powerplay didn’t go as intended as Brett Stovin stole the puck in the Pats’ end, drove through defending Pats and scored to put Saskatoon up 2-0, 5:23 into the period.  The Queen City Kids found a response 11:25 into the period when Braden Christoffer got free in the offensive zone, wheeled into the slot and overpowered Nik Amundrud with a hard wrist shot.  The goal was Christoffer’s 20th of the season, the first time he has reached the mark in his career.

The third period saw the Pats fall behind 3-1 early as the Blades won a battle along the boards, turning it into a two-on-one.  Nick Zajac kept the puck and scored Saskatoon’s second shorthanded goal of the game.  Just shy of the six minute mark, Patrick D’Amico won a battle off the boards and centered for Rykr Cole who put the puck just under the bar to pull the Pats within one.  The Blue and White tied the game when Sam Steel grabbed the puck, circled the net and went back door for Taylor Cooper who tied the game 3-3 two minutes later.  Rookie Luc Smith, playing in place of injured forward Austin Wagner, grabbed the puck off the back wall following an Adam Brooks one timer and banked it into the net off Amundrud to hand Regina its first lead nine minutes in.  The lead didn’t hold up as just 44 seconds later, Ryan Graham broke away and scored a beauty to match the score 4-4, sending the game to overtime.

Daniel Wapple was sensational for the Pats in the extra frame, turning aside seven shots.  Due to his efforts, the Blades came up empty on an early powerplay and the game continued into the shootout.  Wapple kept it up, turning away all three shooters and Taylor Cooper scored to push the Pats to a 5-4 win.

The Blue and White are back at it Wednesday night when they host the Kootenay Ice in a 7:00 puck drop. Tickets are available at Ticketmaster.ca, the Brandt Centre Box Office and Regina Safeway locations.